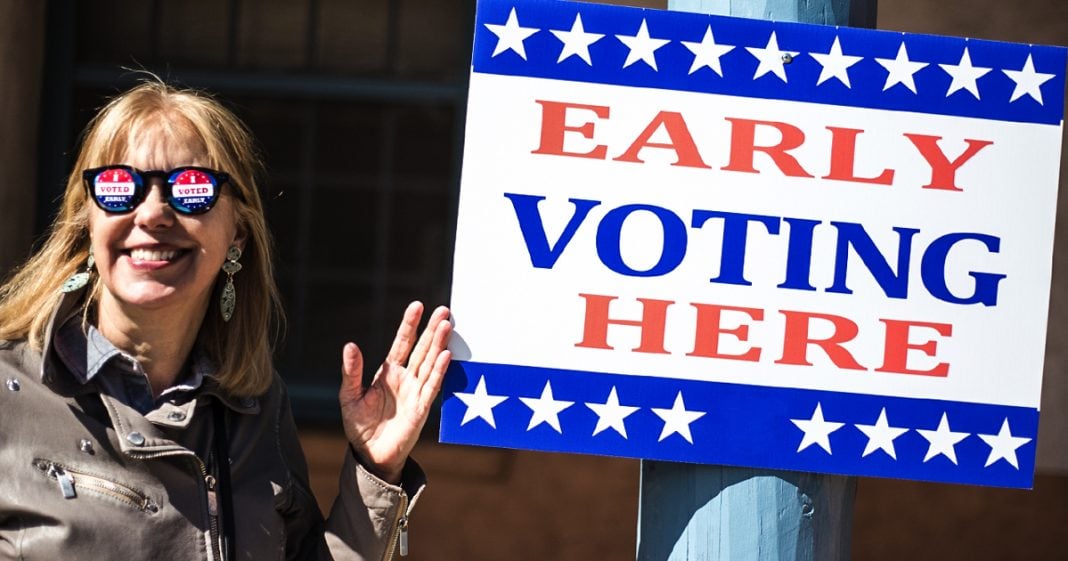 Nearly 60 million Americans have already cast a ballot for this year’s presidential election, eclipsing the total number of early votes from 4 years ago. And Democrats hold a 20-point advantage over Republicans at the moment. But that could mean Republicans are waiting for election day to vote, which means there could be a wave of Trump votes while the early Biden votes are still being counted. Ring of Fire’s Farron Cousins lays out the different scenarios we could be facing.

The early voting numbers coming in right now should absolutely scare the life out of Republicans. But you wouldn’t know that from reading the latest headline from the associated press on Monday, the associated press ran the following headline early vote totals exceed 2016 GOP chips at dims advantage. Now, to read that headline, you would assume that this means that even though in the early days, Democrats obviously had a very clear advantage in early voting. You would think that that lead must have shrunk significantly in order for the associated press. You know, one of the actually very few nonpartisan news outlets out there, there’s no bias one way or the other. You would think that this means that that gap had pretty much closed up. And then you read a, what are we five paragraphs down on October 15th, Democrats, Democrats registrants cast 51% of all ballots reported compared with 25 from Republicans on Sunday, Democrats had a slightly smaller lead, 51% to 31%. And there’s, there’s still a T one point gap between the Democrats and the Republicans Democrats hold a 20 point advantage in early voting over Republicans and the associated press here wants you to think that Republicans are chipping away at it. No, it took them 11 days, 11 days to close the gap by six points and 11 days.

So even if you know, the eight days before the election, if they close it, another six, Democrats will still have a 14 point advantage. I’m not seeing how they’re chipping away at this. I’m not seeing how this in any way, shape or form is a good thing for the Republican party. In fact, folks, the numbers are very bad for Republicans. We are seeing record breaking turnout from the under 30 crowd, which is phenomenal. That is what this country has been waiting for. That is the thing, the one thing that finally needed to happen to really kickstart the decay. I guess the electoral decay of the Republican party. If you didn’t have the youth vote, it was always going to be kind of this close thing. The youth vote older overwhelmingly as liberal. They overwhelmingly support Joe Biden. They’re overwhelmingly voting for Joe Biden right now. And although Joe Biden is not the most liberal guy out there and neither is Camila Harris, there’s certainly more liberal than a Republican party.

And these people voting right now. They may not get the president that they deserve, but they can certainly shake things up in the house and Senate. They can put more progressive members in the house, more progressive members in the Senate. This is not good for the Republicans. And they’re certainly not chipping away at an advantage. It is not dropping enough. Now here’s the bad side for the Democrats. Polls also suggest that most of the people waiting to vote on election day are Republicans. I think Republicans hold an almost 20 point advantage on that day almost so the gap could close the gap will close. But what this is also likely going to do is create a lot of confusion on election day because those votes cast on election day are going to be counted right then. And you’re going to have exit polls and you’re gonna have media outlets calling States for one person.

Even if you still have a hundred thousand early votes that haven’t been counted yet. Cause they typically not always, but typically wait to count those election day. Then of course you have the mail-in ballots and they can still take those as long as they’re postmarked by election day for a few days after, unless the Supreme court kills that, which they very well could. But for right now, it stands. So we may not have a have a winner on election night, but because of the election day numbers that are projected, Republicans could declare an early victory only to be, I guess, see that taken away from them after the rest of the ballots are counted, which would then probably lead to chaos. Republicans would think the election got stolen. Some trickery happened, but that’s why everybody needs to hold their breath on election day because there’s a good chance. We will not know who won. Hopefully that’s not the case. Hopefully Democrats show up on election day. Trump gets voted out and there’s nothing he can do to contest it. But if not buckle up, it’s going to be a bumpy ride.