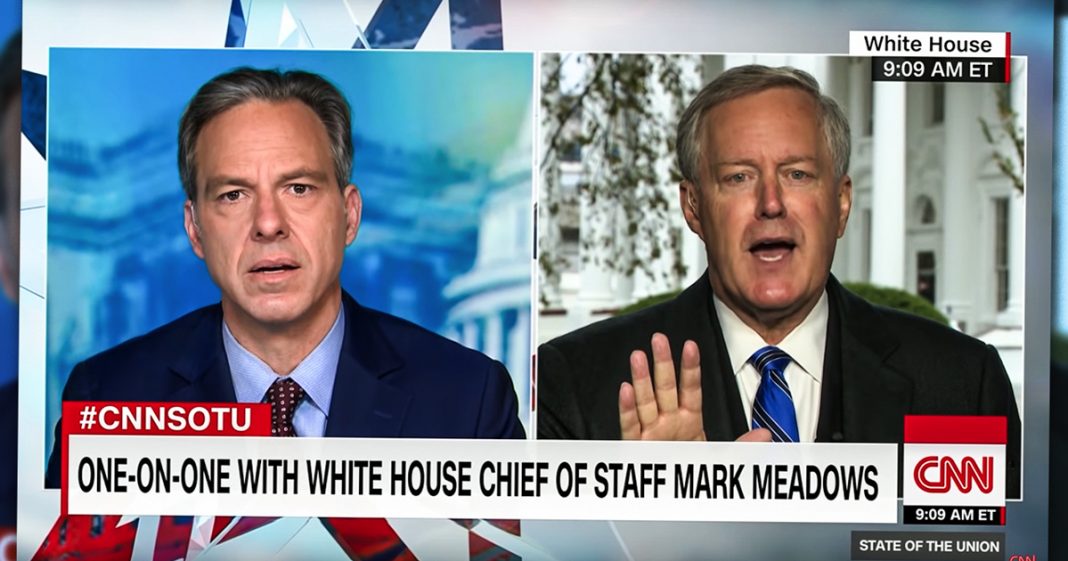 Mark Meadows, Donald Trump’s chief of staff, admitted during an interview this weekend that the administration is no longer trying to contain or control the virus, marking a surrender by the government to the pandemic. The United States is experiencing a horrendous second wave of the virus right now, hitting new highs on Friday and Saturday, and this administration has thrown their hands up and admitted defeat. Ring of Fire’s Farron Cousins discusses this.

Yesterday Sunday, Donald Trump’s chief of staff, Mark Meadows, who by the way, is actually dealing with a pretty intense, possible violation of campaign finance rules. But nevertheless, he appeared on CNN to talk to Jake Tapper about the pandemic and he admitted the Jake Tapper that yeah, even though the United States is experiencing a, I guess what you would call the second wave, even though the first wave never really ended a Friday was the highest day ever Saturday was second, highest day ever. But Mark Meadows on Sunday after the two highest days we’ve ever had told Tapper, we’re not going to control the virus. Here’s the exchange meadow says, we’re not going to control the pandemic. Tapper asks why not? Meadow says because it’s a contagious virus. Tapper responds. Why not make efforts to contain it. And Meadows replies, what we need to do is make sure we have the proper mitigation factors to make sure people don’t die.

So we’re just going to say, you guys are probably going to get infected and we’re just going to sit here and hope that you don’t die from it. But aside from that, I mean, we’re really not going to do anything Again. We just had the two worst days, highest numbers of new infections in the country. Since the beginning of the pandemic, the thing is getting worse, not better. And here is the chief of staff to the president of the United States telling the country, Hey, we just got to give up. You got a white flag here. Yeah. We surrender to the virus. Yay. Please don’t kill us. Maybe we can make a deal with the virus. Listen, we have had seven, eight months at this point to get this thing under control, to see any kind of leadership whatsoever from this administration. And here we are a week, a week before the election and Meadows goes out there and says, we’re not going to do anything. We’re not going to do anything. We’re not going to do anything. We are surrendering to this virus because it’s contagious. You know, it’s contagious. You’ve still held super spreader events at the very white house. The one that got the president sick you’re out there letting your boss hold super spreader events in cities and States all over the country. The last two weeks,

People are dying. People are getting sick. People are experiencing permanent lung damage because of this surviving. It isn’t good enough folks. When you look at the long-term repercussions of this, which we’re still learning about, but people coming out of this with scarring on their lungs, permanent breathing problems from this virus. Yeah. I’d say that’s a big deal. This isn’t a zero sum thing, you know, live or die. And if you live, you’re fine. And if you die, you’re dead. That’s not what it is. There is a whole range of permanent problems that emerge from this thing. Not in all people, absolutely not, but in enough to make it a massive problem, especially considering the fact that we live in a country where preexisting conditions are about to not be protected because Republicans have fought forever to make sure pre-existing conditions are not protected. So Republicans are getting us infected with this virus.

That’s going to give us preexisting conditions. And then they’re going to take away our coverage for preexisting conditions so that we die from something else. If it’s not the pandemic they’re going to kill us with it’s going to be something else or record. Number of Americans have already cast their ballot for the 20, 20 presidential election. And if Donald Trump’s people continue to go out there in the media, like Meadows did on Sunday and say, Hey, try not to die from it. Then I think we’re going to see even more record turnout next Tuesday. And I think most of that record turnout is going to be to get this crazy person, Donald Trump and his crazy staffers, like Mark Meadows out of office, because that just might be the only way, way to save countless American lives.