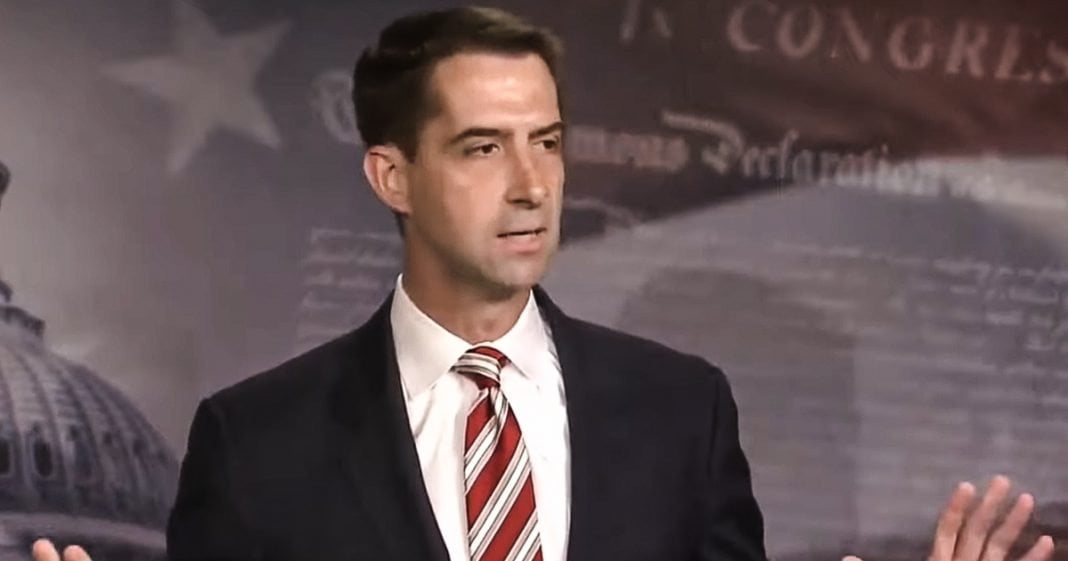 Republican Senator Tom Cotton spent some interesting time in New Hampshire recently, and it has only increased speculation that Cotton is gearing up for a 2024 Presidential run. Cotton poses a unique threat to the United States, as he has emerged as one of the biggest war hawks in the Senate. A Cotton presidency would undoubtedly lead to more wars and foreign meddling than this country is already experiencing. Ring of Fire’s Farron Cousins discusses this.

Well folks, the election week and a half away. And then after that it’s history, we no longer have to play a role in the 2020 election. After about a week and a half, two weeks from now, we’re done. We’re done. It’s great. It’s a great feeling. Hopefully on election night, we are going to have a clear winner and it’s not going to result in a prolonged legal battle in the courts where Trump’s handpicked, appointees are going to hand him the election, even though he didn’t win it, hopefully none of that happens. But regardless of what happens, 2020 election will be in the rear view mirror, which means we now all get to look forward to the 2024 presidential election, which is apparently all ready, starting. We haven’t even finished 2020, and we are already getting bombarded with the speculation pieces. But to be honest, I actually liked this.

And I think this is something that that’s worth talking about at this point, because it’s interesting, no matter which way you slice it, Trump’s not going to run again in 2024. So we are going to have a new Republican. We have many Republicans who would love to be president, but they’ve already kind of blown their shot at that. But then we have the up and comers and one of the up and comers who was profiled this week by business insider is Tom cotton. And Tom cotton folks has been spending a lot of time in New Hampshire. In spite of being just a lowly little Senator from Arkansas. Who’s only been serving for really a couple of years. Cotton decided to, uh, go up to New Hampshire and help embattled Republicans, uh, trying to challenge democratic incumbents. And there’s no shot of that, but cotton didn’t heavily publicize this. He didn’t sit down and make a big media spectacle of it. Even though he did talk to media outlets while he was there. Instead as business insider pointed out, this seemed more like a dip, the toe in the water, prove to your donors that you can go there and resonate in one of these early primary States, which by the way, that whole system needs to go. It’s stupid. New Hampshire is not representative of the rest of the country. Neither is Iowa. This is stupid. Nevertheless,

Yes, he’s there, there. Or he went there. He did a good job. He was calm, relaxed. He was chill. He was a human for once in his disgusting life. Tom Cotton was a human, but don’t let any of that fool. You, Tom cotton is a dangerous individual. Tom cotton is one of the biggest warmongers in the U S Senate, since the passing of John McCain. In fact, the passing of McCain kind of passed that torch on to Tom cotton, who let’s also not for kit, uh, essentially committed treason. When he sent a letter to the leaders of Iran and said, don’t abide by this agreement. He undercut the president of the United States. And by definition, that was treason. He was never charged, never convicted, but it’s there in black and white. We know what Tom cotton is about. Tom cotton is unhappy with Trump for saying he wants to pull troops out of Afghanistan.

Tom cotton wants us to go over there in the middle East and just stay there forever. Why? Because when Tom cotton was in the military, one of Tom cotton’s duties for most of his military career was to be a sort of liaison is on between the U S military and us government contractors. That’s what he did. He worked with the contractors. I’m sure he saw battle too. I don’t want to undermine the fact that he did, did serve, but he mostly served the contractors and as a politician, what he wants to continue to do if he gets elected president, because he wants run in 2024, Kyle Kalinsky is she’d been talking about Tom cotton, uh, as a likely, you know, front runner already only 24 for quite some time now. And I, and I agree with them a hundred percent, Tom, cotton’s the guy to beat at this point.

Cause the warmongering doesn’t necessarily scare Americans the way it used to we’ve kind of become numb to it. We have soldiers fighting in Afghanistan right now whose parents fought in Afghanistan after nine 11, we have now a generation of war that’s been going by the time the 20, 24 election hits that will have been going on for more than 20 years. So yeah, people are a little bit numb to it. I’m sure most Americans don’t even realize it’s still happening because they’re so disconnected on the issue of foreign policy. So Tom cotton coming in and saying, Oh, we’re going to do those. We’re going to do that over there. We’re going to go. And we’re going to bid the bad guy who are the bad guys who are the bad guys. Notice that the bad guys in the middle East only pop up when it’s politically convenient. Have you ever noticed that the real bad guys over there are the ones that we’re selling the weapons to? They’re the ones who are carpet bombing, innocent people in Syria right now, the ones bombing school buses. Those are the bad guys, but we call them our allies.

Nothing that we’re doing in the middle East makes any sense at all. We are constantly contradicting our own policy. We’re selling our weapons to the bad guys who we know are selling it to the even worse guys. And then we’re fighting those even worst guys, having our us soldiers getting killed by the very weapons that we sold. That’s what’s happening in the middle at least. And that is what Tom cotton would continue if he wins in 2024. So it’s important to get these issues out there. Now it’s important to educate people about who these Republican front runners are. Cause if we don’t start doing it now, by the time they actually launched their campaigns, it’s going to be too late.