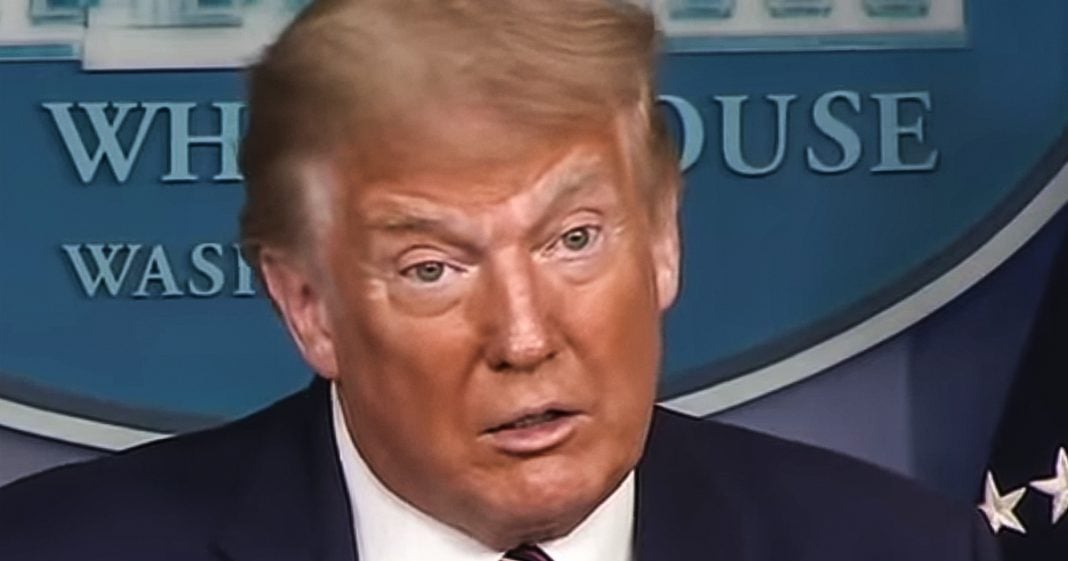 The election is a little more than a week away, and mental health experts think this isn’t soon enough. According to multiple experts in the field, Trump’s behavior over the past few weeks has become increasingly erratic and dangerous, and they attribute this to his fear of losing the election. Ring of Fire’s Farron Cousins explains what’s happening and why we should all be very concerned.

There was a brilliant article out this week on raw story by two, a psychiatrist, mental health experts and teachers, uh, men by the name of Alan blocky and Seth nor home and in their article, they talked about the fact that Donald Trump is becoming more desperate. And the more desperate this man becomes, the more his psyche begins to deteriorate. And as they point out ample times in their article, we’re seeing the evidence of that play out daily. We are seeing it with Donald Trump as these, uh, professionals point out re-tweeting Q Anon accounts, try to make these conspiracies that are clearly false into reality. We see it in his rallies when he tells crowds that I wouldn’t be here. If I was polling better, that’s not a normal thing you would say to people. It’s not, you wouldn’t say them all. If I lose, you’re never going to see me again.

I may have to leave the country. That’s not normal. And it shows that he’s cracking because of how desperate he is. He is desperate to convince these people who do truly love him. And that’s a whole another psychological issue to deal with. But he’s trying to convince them that if you don’t get out there, if you don’t ensure that I win I’m out of your life forever, ever, you will lose me and I won’t be there for you. And then it does terrify some of these people, the thought of it. So again, there needs to be a whole branch of psychology devoted to, to those voters. But right now we’re focusing on the president because after all he is the most powerful person in this country, he does have the nuclear codes. And, uh, so we kind of need to make sure that he’s not going insane right before our eyes.

And unfortunately, that’s not even something we can guarantee at this point. Um, I do encourage everybody to read the article. It’s in the link in the description of the video, but these are not the first two mental health professionals to come out in recent weeks to tell us that something’s going worse with Trump. We have had multiple. And I think we have tried to cover it every single time. A new one of these stories come out every time a new professional says this isn’t normal. We try to cover it folks, because this is important. This isn’t a ha ha laugh at Trump moment. This isn’t a, Oh man, this guy’s nuts moment. This is a very serious issue. We are watching in real time, his descent into madness. And he is bringing a large portion of the population with him. I am on that journey from which there may be no escape.

So yes, this is a big deal that, yes, this is a serious issue. These people need help. They, I truly do. I think Donald Trump is probably beyond help at this point, but his supporters, the ones that you see crying in the stands when he walks on stage, because their mix of excitement and love and admiration, that’s a pathology. That’s something that that can be worked on with professionals. But the crazier Trump gets the crazier they get and the crazier they get, the more on edge the rest of the country gets because we have seen what these people are capable of. Uh, just yesterday, it was announced somebody else was arrested with a car full of weapons on their way to go murder Joe Biden and Kamala Harris. Trump supporter. It’s not the first one either. Sure. President’s madness becomes his supporters madness and their madness. Unfortunately, sometimes turns into action. Luckily, those actions so far have been blunted by authorities, But that’s not a risk. Any of us should be willing to take.