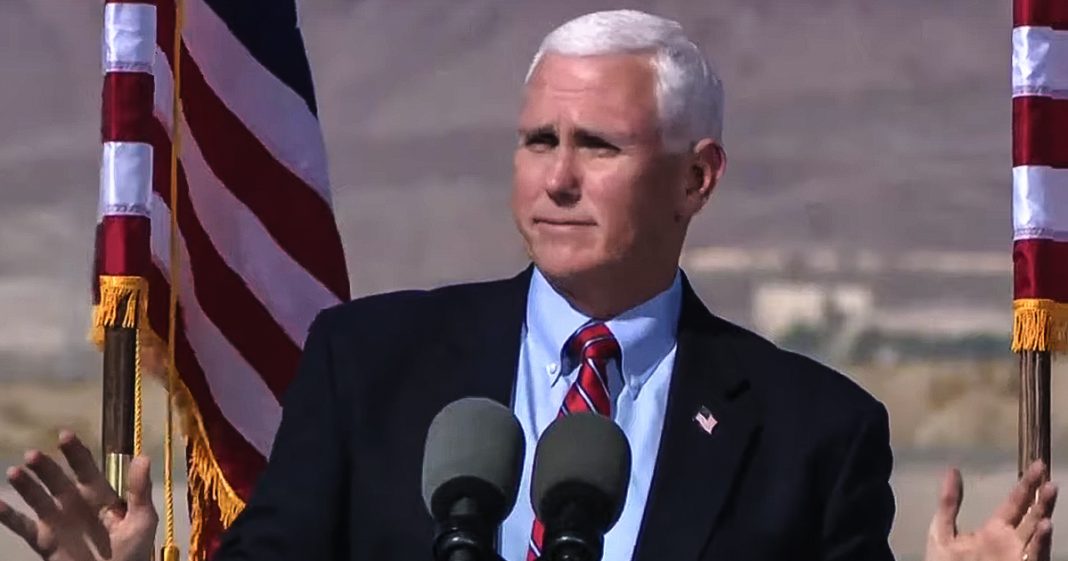 Vice President Mike Pence is refusing to quarantine for the recommended period of time even after being exposed to members of his own staff who have since tested positive for Coronavirus. The disease is working its way through Pence’s staff, but he’s determined to set a bad example for the country by continuing to campaign in the final week before the election, and that’s the most fitting metaphor for this administration. Ring of Fire’s Farron Cousins discusses this.

Right now, there is a massive outbreak of COVID 19, not just across the country, but also in Mike Pence’s office. The vice president is watching his staff members one by one contract, this horrible disease, including his chief of staff. So far, at least five members of Mike Pence’s staff have confirmed to have tested positive for COVID-19. And yes, some of them are actually exhibiting symptoms. They are not all asymptomatic. And yes, Mike Pence has been around all of them within the past week. So is Mike Pence listening to medical professionals and quarantining himself for 14 days, not exposing other people to what he may or may not have come in contact with. Of course not. Is Mike Pence. What about Mike Pence’s history makes you think this guy would ever listen to anything that resembles science? No. Mike Pence has decided that he knows best.

And instead of quarantining himself, he is in fact still going out still on the campaign trail, still having meetings still out there, potentially spreading this virus to countless other human beings. Why? Because he doesn’t care. Mike Pence doesn’t care in people. I need to have that drilled into their head. Mike Pence is no Christian. Mike Pence is no devout religious individual. Mike Pence is a corrupt career politician seeking to further his career. He doesn’t want to go home in a couple months. That would be boring for him. Mike Pence wants to stay on as vice president, Mike Pence kind of hopes, according to reports that God’s eventually going to make him president. Well, God can only do so much. Mike, you kind of have to do a little bit on your own too. And part of that is listening to people who are much smarter than you, which in your case, pretty much anybody you ever come in contact with.

But here’s the thing. We again, are experiencing this surge. The numbers are going to get worse. Friday was the worst we’ve ever seen Saturday. The second worst we’ve ever seen things are getting bad and they’re only gonna get worse. And Mike Pence understands how serious this is. He truly does. He was the head of the task force. I don’t care that he’s tried to downplay it. He was one of the few people in this country that got to see the real raw data, the real intelligence on this before it got cooked and skewed and serve to the American public Pence, got to see it. So he more so than probably anybody else that isn’t a medical professional understands this, but he is hoping that he has done a good enough job with his propaganda, with his suppression of science that he can go out there and act like, Oh yeah, just because I was right next to my staffer, who now has it?

That doesn’t mean I have it. Don’t worry. Come closer to me. Stand within spittle distance. If you can, this is dangerously irresponsible. But honestly this is a metaphor for the entire administration. Like that’s what we’re witnessing play out right now. This is the metaphor for the entire Trump administration. We know this is wrong. We know this is dangerous. We know this could get people hurt or killed. We’re going to do it anyway because we don’t care that ladies and gentlemen has been the last four years of the Trump administration in a nutshell, doesn’t matter. The policy doesn’t matter the time that is what this administration has done from day one. So it’s only fitting that that’s what they continue doing. Hopefully till their bitter end, after the election.