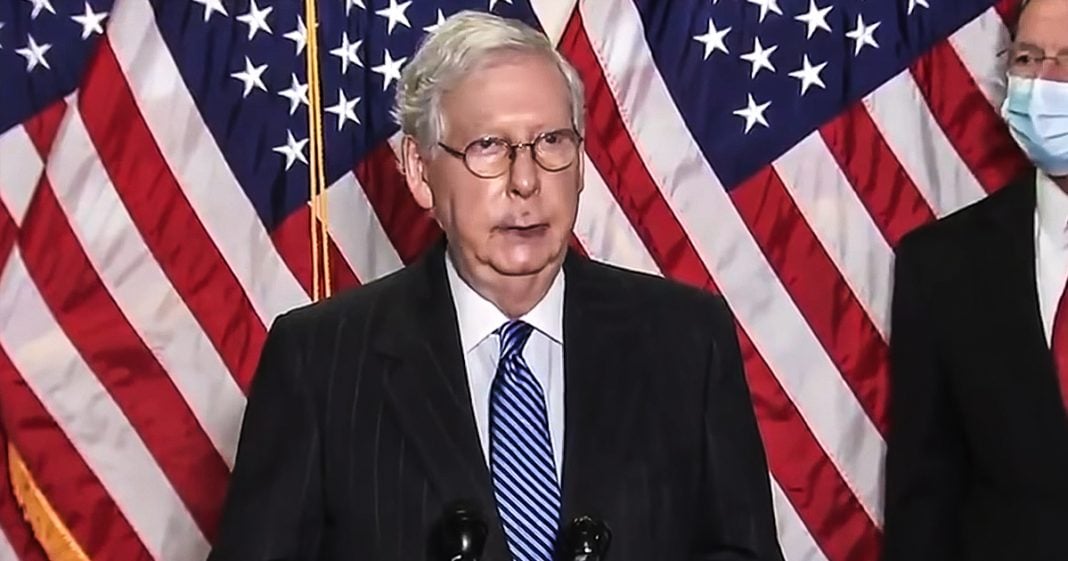 Republican Senator Mitch McConnell emerged last week looking like he’d had a bad night at Fight Club, with his hands covered in bandages and bruises, and his face pale enough to be mistaken for a vampire. But when pressed about his health after these images emerged, McConnell refused to say what had happened to him. This is the man in charge of the future of the Supreme Court and the one holding up COVID relief, and the public has a right to know if there’s something wrong with him since he wants another 6 years in office. Ring of Fire’s Farron Cousins discusses this.

Last Thursday, uh, Mitch McConnell, Republican Senate majority leader was photographed at a podium. His hands were all purple and bruised and had bandages all over him. And his face was kind of so white. You might mistake him for a vampire. I mean, basically the guy looked like he came from a bad night at fight club and he was pressed by CNN shortly after that, about his health. He said, everything’s fine. Nothing Mitch McConnell right now folks. And again, he’s been asked by the media, given the opportunity to explain himself like what’s going on because you’re fricking turning purple. Did you just have a bad experience at Willy Wonka’s factory? Did you eat something you weren’t supposed to and you’re starting to swell up. He won’t tell us. So of course this has obviously led to lots of speculation on social media. The pictures are, are, are rather shocking.

This is not what Mitch McConnell usually looks like. Now rewind a couple of weeks. Remember, uh, there was that clip of Mitch McConnell walking up to a podium and he trips. Um, so we know some may not be quite right with him. The man is 78 years old and he’s running for another six year term as a Senator folks. He is not up for the job. I don’t care what party he’s in. He’s not there. I mean, look, we have talked about, uh, Trump’s health. We have talked about Biden’s mental health. We have talked about Pelosi’s mental health. So this is the first time we’ve really talked about is Mitch McConnell fit for the job he wants to hold. And I think clearly the answer is no, because if he were, he would tell us, Oh yeah, this, this is what happens when you have blood drawn in several different places on your hands, but you’re also taking blood thinners, you know, for risk of a heart attack.

That’s it. That’s all you had to say. Millions of Americans are at risk for a heart attack, millions of Americans on blood thinners. There’s nothing wrong with that. And how do I know that that’s what happens to your hands? Because it happens to my father every single time. He, uh, has to get blood drawn. He ends up with huge, huge bruises. Cause the blood thinners he’s not hurt. He’s not injured. It doesn’t mean he’s dying. It just means that his blood is slow to slow to clot and it leaks around it. And it turns burp when it goes away.

That’s all Mitch McConnell would have to say, because honestly that is probably the most likely, according to some of the doctors on Twitter who say they’re doctors, I’m hoping you’re actually doctors, but, uh, and the, some of the marks where the bandages are, would indicate that’s where blood was drawn. There’s one on his thumb though. That’s a little weird, probably not going to have blood drawn on your thumb. So there’s unanswered questions and Mitch McConnell refuses to answer those a couple of weeks ago, Mitch McConnell actually refused to answer. When was the last time he had a COVID-19 test? This man is hiding something. And at his age at 78 years old, where he’s already far surpassed what the actuarial tables say he be, I don’t think a six-year term is a fitting reward for this man who could be on death’s door.

We don’t know cause he won’t tell us. But when you’re applying for this job, you kind of forfeit all rights to privacy about your health. If you want the people of Kentucky to go out there and give you another term in office, you need to be crystal clear to them that you’re going to survive that term. And Mitch McConnell can’t do that. And that should be a warning to every voter in Kentucky.Given the way he looks now is Mitch McConnell going to make it out to the other side of that new six-year term he’s likely to win. I don’t know. Doesn’t look like it, but then again, he won’t tell us what’s really happening with his body. So I guess we have no way to know for sure.