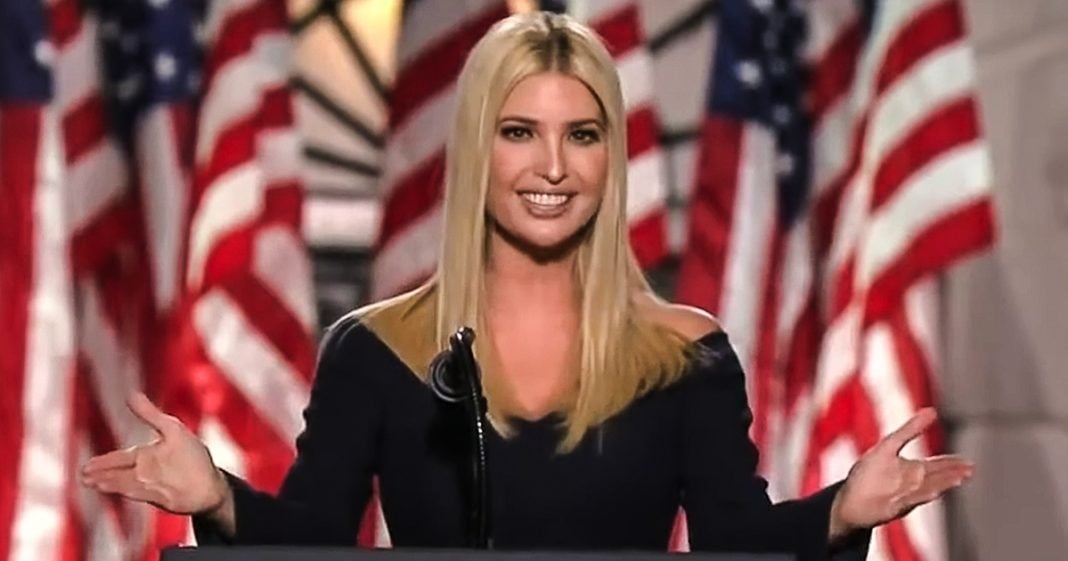 Ethics watchdogs are warning that Ivanka Trump could be facing some very serious investigations if her dad loses the upcoming election. Ivanka has had multiple different complaints filed against her over the years while she’s been in the White House, but without the protection of her father, she won’t be able to continue to dodge all of the complaints and questions headed her way. Ring of Fire’s Farron Cousins explains what’s happening.

One of the biggest reasons why Donald Trump is obviously so desperate to win reelection this year. Not just because he likes the title or the officer living in the white house. It’s because he understands when he’s no longer president. He now has to face all of those lawsuits and investigations that he has been able to successfully avoid while serving as president. But Trump himself is not the only one that needs to worry about these things. His kids need to be concerned too, because as Donald Trump has been able to claim executive privilege and push all of these things back. So to have his children benefited from this, and none of them have benefited from this more than Ivanka. Ivanka Trump has been hit with many different ethics. Complaints of violations have been reported. Uh, citizens for responsibility and ethics in Washington have reported her on numerous different issues.

But none of those so far have been able to go anywhere. She works for the president of the United States. Uh, she has been claiming privilege on all these things. So you can’t do anything yet. You cannot talk about it. You cannot question me. You cannot investigate because I’m in the white house and you’re not, well, eventually you’re not going to be in the white house. Maybe it happens after this election. Maybe it takes another four years, but one way or another, you’re not going to be in that white house forever. And then you will be facing these possible investigations against you. One of the things, obviously the trademarks that she got from China, which includes Ivanka Trump voting machines, that’s a horrifying thought, isn’t it like, how confident are you going to feel going into a polling booth and seeing your maiden, China Ivanka Trump voting machine.

Yeah. I’m not touching that with a 10 foot pole, even if we weren’t in the middle of a pandemic, but that’s one of the things that she has had complaints filed against her for, especially considering the fact that other companies that have sought to get trademarks from China, I’ve been banned from doing so, but not Ivanka and her goods and services or not services, but her goods that she is having produced in China were somehow not subject to any of the tariffs that her father put in place. She has benefited greatly from her position in the white house. And according to some of the complaints against her, hasn’t always been on the level, but again, she claims privilege. So there’s not a whole hell of a lot. A judge can do right now. Not a whole lot prosecutors or investigators can do right now. So she’d better hope that daddy pulls off some kind of a stunning electoral defeat against Joe Biden, just like he did against Hillary Clinton in 2016.

Because if he doesn’t do that, Ivanka Trump is also going to be facing these investigations. She is going to have to answer these questions and folks, if that isn’t a good enough reason to vote against the Trump crime family, then I don’t. What is because look, we obviously care about policy tremendously. Here. we do. We talk about it all the time. We talk about the need for big, bold strokes, the need to do something radical, to change things, to shake things up, to burn it down in certain areas and build it back in a way that works for America. We talk policy all the time, but I’m going to tell you part of the selection, a little bits about revenge. I’ll be honest. A little bit is seeing these smug jackass conservatives taken down a peg, not just the crazy in your face, Magda hat wears, but also the members of the Trump family who’ve lived too large for too long.

Seeing them go down and flames. Yeah. That’s also part of it. So it is a little bit personal. It’s mostly by the way, because of how horrible they are and the horrible things they’ve done to this country and setting back environmental justice, blocking kids in cages and separating them from their parents, then losing their parents, creating hundreds of new orphans, things like that. Yeah. That’s horrendous the handling of the pandemic, tanking the economy. Yeah. Those are horrible things, but there is that small part of me who says, forget all of that. It’s just going to be fun to watch these idiots lose. It’s a small part, but it’s definitely there. And I know most people watching this, you have that a little in YouTube.