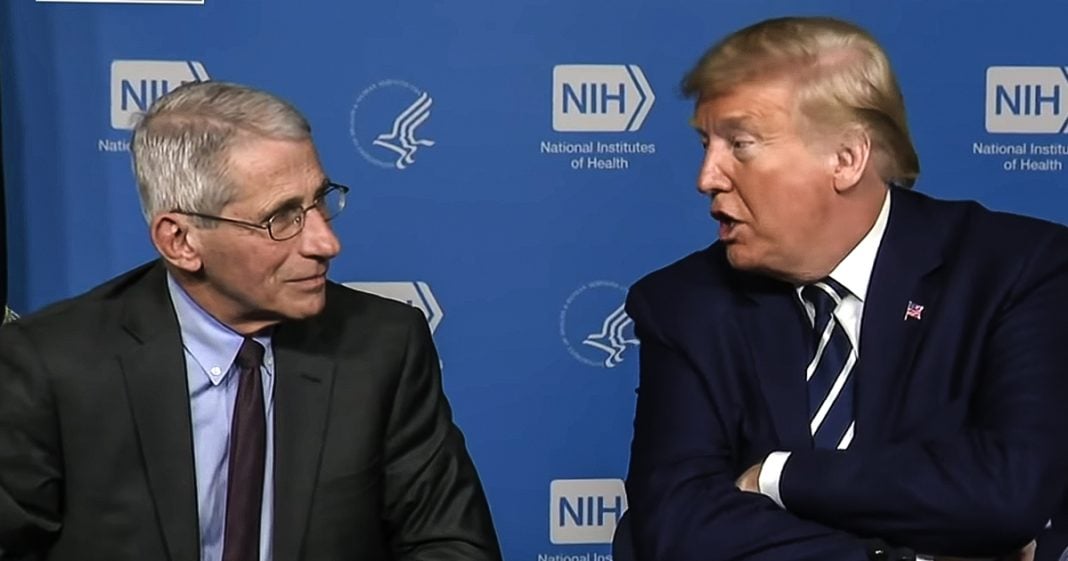 Earlier this week, Donald Trump slammed Dr. Anthony Fauci as an “idiot” and then proclaimed that he would start doing 5 rallies a day just to spite the doctor. This is a stupid strategy, as Fauci is about the only member of the executive branch that has an approval rating of over 50% (and his approval is actually higher than Biden’s at the moment.) When you have only one popular person in your orbit, its probably smartest to not cast them as the weirdo, as Ring of Fire’s Farron Cousins explains.

Earlier this week on a call with his staff, Donald Trump lashed out at dr. Anthony Fauci. And according to those on the call, he kind of referred to faculty as an idiot, uh, in context, based on the reports of it, he may not have meant Fauci was an idiot, but either way, he did attack dr. Fauci, um, and said, people are tired of hearing him. Here’s what they said. Uh, according to the people on the call, this is word for word, what Trump said, according to them, uh, people are saying whatever, just leave us alone. They’re tired of it. People are tired of hearing Fauci and all these idiots Fauci is a nice guy. He’s been here for 500 years, so, okay. Maybe he didn’t specifically say she was an idiot, but he did say that all fell. She’s friends are idiots, but all the Fauci friends are also the doctors.

You know, the, the medical experts, you know, the people who are experts in, in pandemics and spread of viruses. I mean, they, they know what they’re talking about. Uh, I haven’t, I haven’t come across actual, real human beings who say, damn it, I’m tired of this. You shut them doctor folk up. I mean, sure. We see the, the anti maskers, but that’s just because they’re morons. I don’t take the opinions of moron seriously, nor should any of you. They do not deserve our time of day except to, you know, film videos of them freaking out and posting on social media. They deserve that. But anything more than that? No, absolutely. Their opinions don’t matter because they’re not experts in this field. Fauci is. So that’s why I finally wanted to talk about this. I’ve ignored this story for many, many days, but I think it actually deserves a little bit of coverage here. And the reason is because this is an incredibly stupid move by the president. This story blew up in the early part of the week.

Fauci is the only member of the Trump administration who has a positive approval rating at this point. She’s the only one. He’s the only member of the Trump administration that actually has experience in the field that he is working in. Like not only that. Okay. Okay. So, so the only one with the positive approval rating, the only one who knows what the hell they’re talking about. Cause they’re actually in the field where they’ve studied and it pisses Trump off. But then in the call, he went on to say, you know, uh, he said it would be a bigger bomb if he fired Fauci. So he’s thought about it. He’s talked about it obviously. And members of his staff members of his campaign have come to him and said, do you understand the political ramifications of this? Do you know what’s gonna happen? If you let this guy go, you’re done you’re toast.

And that’s absolutely true. And you know why Trump knows why? Because he was lying in his earlier statement when he said people are tired of it. If people were tired of Fauci, they wouldn’t care if Trump fired him, would they? So we just caught them in the contradiction right there. That’s what it is. That’s the part of it. He knows people are not tired of Fauci. He knows people like him, vouching, not him. And he knows he’s got a real upward, uh, uphill battle ahead of him, but attacking Fauci, attacking the only member of this administration who knows what they’re talking about about anything. That’s a losing strategy, but of course, Fauci doesn’t 100% agree with Trump all the time. So yeah, he may be the smartest guy in the room, but Trump’s going to attack him anyway and claim that he’s an idiot.