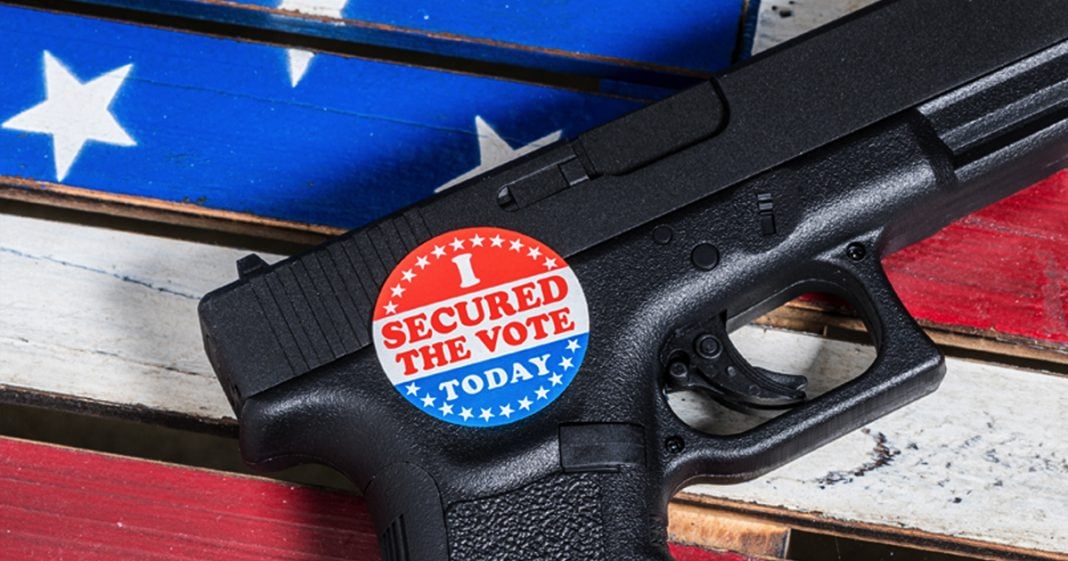 Men with guns showed up and posted themselves outside of a Florida early voting location this week, telling authorities that they had actually been hired by the Trump campaign to do so. While the actual reason for their presence there is currently under investigation, this is the type of psychotic behavior we can expect from Trump supporters as the election nears and as his poll numbers keep falling. Ring of Fire’s Farron Cousins discusses this.

Earlier this week, two armed men showed up at a pole, same place in Florida claiming to have been hired by the Trump campaign themselves to just hang out, I guess, in front of the polling place. Now Florida began their early voting and there were mine’s out there, lots of people. And so these two men armed to the teeth show up and they just post up right outside the polling place, guns and everything, which first and foremost is illegal to bring a gun to a polling place in the state of Florida. So right there, they’re breaking the law. So the sheriffs show up and the two men say, Hey, Hey look, we were hired by the Trump campaign to be here and they do leave. And they say, well, we’re coming back tomorrow. Um, so the sheriffs, you know, understood that they now have to watch this area.

They now have to be on guard. So you’re now taking resources away from the city away from the County and away from the state in order to police these polling stations, to make sure that these crazy Trump supporters don’t show up with guns, threatening people, trying to vote every day. The think about everything. I just said, it is nuts. It truly is, but this is America in 2020, this is Trump’s America. And these are Trump supporters. Now as to the claim that they say that they were hired by the Trump campaign, I have serious doubts about that. I truly do. I just think we’re dealing with a couple of wackos who were looking for some kind of thing to maybe get them out of trouble. The Trump campaign has made some horrible mistakes and it’s not run by very bright people, but I don’t think even they are that stupid.

Uh, I, I could very easily be wrong. I don’t think I am though. But the reason I’m even talking about this story here, Oh, and then we found out this also happened to an a Midwest state. I forget off the top of my head, but it did happen somewhere else too. It was either Minnesota, Wisconsin, Michigan, somewhere. I’m sorry. I’ve wished I, I wish I had written it down, but anyway, this is happening and it’s not just happening in Florida. It is happening in swing States where Republicans know they have to pull off massive electoral victories or else they’re losing the white house and possibly depending on the state, the Senate as well, if Democrats turn out in larger numbers than the Republicans there goes the Senate. And so they’re desperate and I’m not talking about the party. I’m talking about the people who show up at these polling stations, heavily armed.

What are you going to do? I, and that’s what I want to know. What are you going to do suppose you do find the rare unicorn of an in-person person committing voter fraud, or are you going to execute them right there on the spot? Is that what the guns are for? Are you going to put a bullet in somebody’s brain because you think they were voting illegally? What is happening? Folks? This is another great example of why we should have stricter gun laws. Not saying confiscate them all, but people like this shouldn’t be allowed to because this is crazy. They need to undergo psychological evaluations. You don’t just show up at a polling place with a semiautomatic rifle saying, I’m making sure nobody votes illegally. You’ve been brainwashed. And a brainwash person is probably a little too dangerous to be walking around with a weapon capable of killing dozens of people in under a minute.

I don’t know. Maybe that’s just me. Maybe I’m the crazy one for thinking that, but I don’t think so. This is the kind of intimidation we’re up against. This is what’s going to be happening and we’re going to start seeing, unfortunately, more of these stories start emerging as we inch closer and closer to election day. And then God forbid all hell breaking loose on election day, his supporters are terrified. They’re frightened and they have been brainwashed into thinking that voter fraud is going to happen across the board. We have to stand our ground. We have to make sure we get out there. We vote and we do not let these people intimidate us into staying at home. What they are doing is illegal. Most everybody has a phone on them at all times, call the police. If you see anyone near a polling station, anywhere with a weapon it’s illegal in most areas, call the police and have them deal with it. You concentrate on voting and do not let them intimidate. You do not answer their questions. When they come up to you and try to ask you questions, don’t do it. Do not in engage in any way, film it. Make sure you get their faces on camera and call the police.