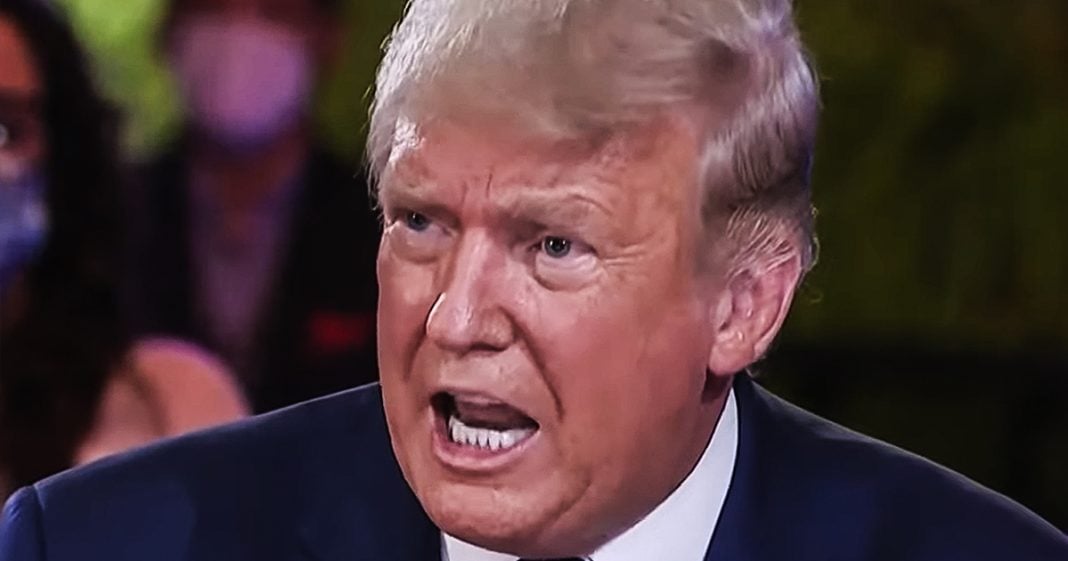 According to new reports, the Trump campaign is so short on cash that they are willing to settle lingering lawsuits for pennies on the dollar in order to quickly get the funding that they need to fight off other, more pressing lawsuits that they are facing. The campaign, the reports claim, is nearly out of options, and bankruptcy likely won’t protect them the way Trump has used it to fight off legal claims in the past. Ring of Fire’s Farron Cousins discusses this.

According to a new report from Politico this week, uh, the Trump campaign is so low on money that they might actually lose some of the many lawsuits that they’ve filed due to the simple fact that they can’t even afford to pay their legal fees or their lawyers anymore. Now that’s, that’s low on money. I mean, especially for a campaign that’s pulled in over a billion dollars this year to not be able to pay for all these lawsuits that you have for some reason, injected yourself into, because that’s, what’s fun about this. None of the lawsuits that this campaign is fighting were necessary. It’s not like they were being sued because they allegedly did 70 million. No, no, no, no. They’re either fighting the RNCs lawsuits trying to suppress the vote because they don’t want you to vote. Or they’re fighting Donald Trump’s personal lawsuits from the myriad of women who have accused him of sexual misconduct or defamation. That’s what the campaign is fighting. None of these were relevant to the actual campaign itself. And to be honest, probably at least the personal lawsuits, things that the campaign should not be paying to legally fight. I’m sure there’s some gray area there, which is what they’re operating in, but I’m willing to bet, uh, you know, might be worth investigators taking a second look at that.

But anyway, onto the fact that they have no money, one of the lawsuits they had been fighting, and this has been going on for a long time, was against Omarosa because she published a book, you know, released all these secrets in the white house and they thought, Hey, this violates your NDA. So we’re suing you Omarosa for a million dollars for suing you for a million dollars. You’re going to give us a million dollars. Well, according to the report, they actually approached her recently. So low on cash. I’m like, yeah, Hey, uh, yeah, but that million, can you just give me like 50 grand, you know, just give me 50 grand and we’ll call it even. We’re not gonna Sue you anymore. It’s just come on, man. I need that hit. I need it. I need it. That’s how low on cash they were. They felt that the secret she revealed after signing an NDA and violating, it was worth a million dollars, but they’re so low on cash right now that they’re willing to, instead of taking a million dollars, take 52 grand is I think the number 52. Yeah, $52,000. They were willing to just ignore the remaining $948,000 that they wanted from Omarosa, because they’re so desperate for any little tiny bit of cash that they’re willing to say, okay, forget the million 50 grand right now, out the door. And we’re done. You don’t have to worry about us coming back to bug you again.

That’s crazy. That’s how hard up for cash. They are according to this report. And again, this is by their own design, but what’s also humorous to me about this report so that this report came out a day, one day after I told you exactly what was going to happen, they were going to have the campaign fight as many of these lawsuits as they could. And then once they either lose or even if they win, actually at that point, cause you don’t need this campaign anymore after that, because it’s your second term. You’re your term limited. Have the campaign itself declare bankruptcy and then say, I can’t Sue us. We had no money. We got bankruptcy protection. Uh, it’s what Donald Trump did with his businesses. Cause this is he’s running the campaign the same way he ran his businesses running into the ground. No money left, declare bankruptcy and say sucker as you can’t get anything out of me, but that’s not how this is going to work

Because you filed most of these lawsuits. So you’re kind of screwed there. Plus we’ve never, I guess, really seen how this would play out a campaign, declaring bankruptcy, even if they’re being sued by people. I’m pretty sure the liability for that since they’re suing the individual, not the campaign is just going to fall back on the individual and take the campaign out of the equation. Um, this was a stupid decision on their part. It doesn’t provide them any actual protection, but I’m sure they think it does. But as I’ve said repeatedly, and as we have seen evidenced over the last four years, Trump doesn’t always pick the best lawyers. Trump rarely picks the best lawyers and I’m sure they probably told him, no, this is the best route to go. Why? Because it ensures a prolonged legal battle, which lets all these little defense attorneys keep milling him. So they make more money even as they give him what is clearly some pretty bad legal advice.