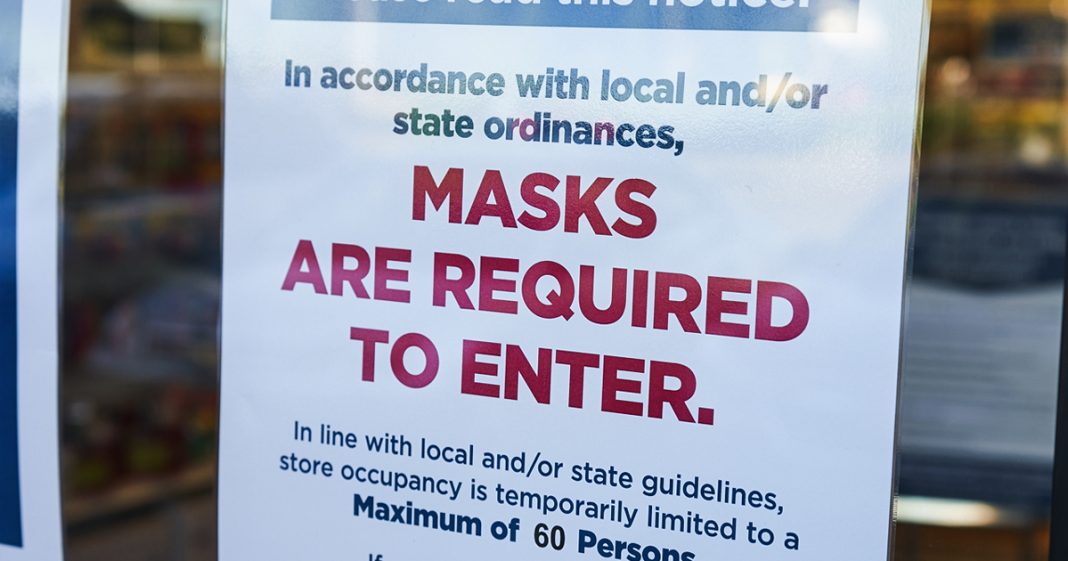 Retail workers in the United States have been considered essential since the early days of the pandemic, and viral videos have shown how these individuals have been forced to become the authorities on people wearing masks. This is an unfair position for these workers to be in, and now companies are having to provide special training to their workers on how to deal with the deranged anti-mask people who enter their businesses. Ring of Fire’s Farron Cousins explains what’s happening.

The United States, you know, we’re, we’re a unique breed to say the least, right? Uh, we’re lawyer arrogant. We’re a little cocky. We sure as hell. Don’t like being told what to do. I mean, that’s kind of, one of the reasons this country was founded the way it was, right. We stand up for ourselves. Know we’re big, tough macho. Uh, we don’t really care too much, I guess in general, about the wellbeing of others either, which is why according to a new report by the New York times, retail workers here in the United States, the many people who have long been deemed essential workers during this pandemic are now having to receive special training on how to deal with those. Shall we say, hostile anti mask, people who come into establishments all the time. I’m you look, we’ve all seen the viral videos. We have seen the crazed look in these people’s eyes.

When they’re asked to either politely, you know, please put on a mask. Do you, would you mind putting on a Masco? Well, if you’re not going to do that, Hey, we do have a policy. You, you gotta leave. You gotta go. I’m sorry. And these people lose their it’s crazy. It is crazy. The look in their eyes is pure madness. I’m not talking about anger madness. I’m talking about a psychosis overcomes these individuals because they’re being asked to do something as simple as put on a mask. People have been killed in this country for asking other people to put on a mask. People are dead. People are in their graves because they committed the crime of asking a psycho to put on a mask in the middle of a pandemic that’s that’s America, that’s America. That’s what we are. That’s what we’ve become. And now these essential workers, a lot of them, minimum wage workers, or having to go through special training to learn how to deal with these people so that they don’t get killed. Right?

And so that they don’t spread the disease to other, but it’s mostly so that the worker doesn’t get killed while trying to have to uphold the store’s policy. Let me tell you, no employee should ever be put in this position. Nobody should. But of course, under our combination of horrible capitalism, and of course, a authoritarianism that we’re currently living under, um, people are saying that putting on a mask is somehow a violation of their constitutional rights. That’s not true. That’s nowhere in the constitution. And it takes a really stupid person. Even suggest that. Sorry, I’m going to be honest about that. If you think where you, or being told to wear a mask, violate your constitutional rights, then you’re stupid. Let’s all agree on that. Uh, the second one, the capitalistic system, you know, who ought to be down there telling, telling people to get the hell out of the store. If they’re not going to put on a mask, the manager, the owner, no, they just, they leaving it to the, to the grunts, right? To the pawns because of if shots are fired, it’s, it’s going to go through them. First.

This, everything, everything, everything about this is wrong. Everything about this is insane. And we have allowed this insanity to just overtake us as a country. You know, Trump’s whole thing was I didn’t, I didn’t make a big deal of exciting. One third to be panicked. If you’d have been honest with us, we wouldn’t be in this situation. We wouldn’t have retail workers who fear for their lives. When going to tell some unhinged right-winger you have to have a mass to come in here. If Trump had been honest about this thing from day one, his supporters would all be wearing masks. Honestly, it’d probably be the people on the left who say, well, if Trump says I have to wear a mask, I’m not going to do it. But those people trust me are far less likely to shoot you in the face for telling them to wear a mask. I don’t know. I don’t know. You look at stories like this, and you wonder if this country can’t even be saved at this point. This is pathetic. This is sick. And unfortunately, this is who we are as Americans now.