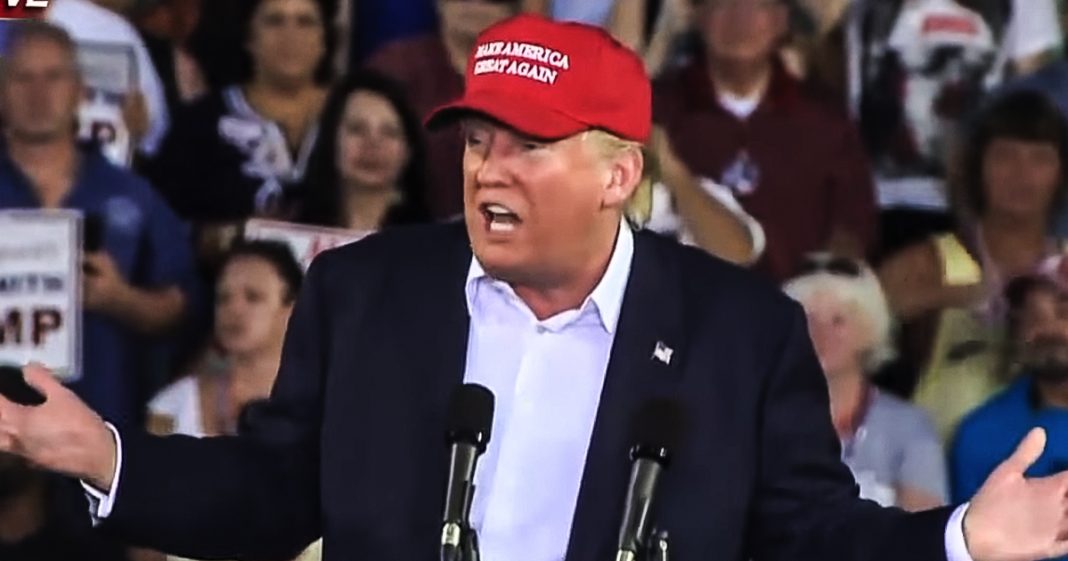 Donald Trump is an absolute leach, and his presidential campaigns and administration are reflections of that. The President is still refusing to pay back cities across the country for the added security and expenses they incurred for hosting his rallies in 2016, and if the President loses you’d better believe he won’t be coughing up the cash to pay any of those bills. Ring of Fire’s Farron Cousins explains what’s happening.

This week, Donald Trump traveled to Tucson, Arizona, where he gave yet another rally. And this one was kind of to try to help, uh, Martha McSally, who was getting her ass kicked in her Senate, race against Mark Kelly. But here’s the problem that Donald Trump had with Arizona. The mayor of Tucson, Regina Ramiro had pretty much not wanted this rally to take place. And not only by the way, because she understands that these rallies become super spreader events and that’s going to lead to a lot more people being diagnosed with COVID-19, which is going to hurt the local economy. It’s going to hurt the state of Arizona. It is a bad, stupid idea, but unfortunately, Trump gets to do what he wants to do in that situation. He holds the rally, the people that went to the rally didn’t have to adhere to the a citywide mask mandate.

Didn’t have to adhere to social distancing protocols, and it’s going to be a super spreader event, just like the mayor fears, but the bigger reason, believe it or not was not just because she doesn’t want more people getting sick. But due to the fact that Trump’s tilos Tucson, $80,000 from a rally, he held there back in 2016 to put it in other way. The Trump campaign still hasn’t paid their damn bills from four years ago because Tucson is not the only city that’s come out recently and said, please pay us the money you owe us because we didn’t have it to front for you, but we had to pull it together. And now our city is running out of money. We have seen multiple cities in Texas make this same claim. We have seen cities in the Midwest have to beg the Trump administration or Trump campaign skews me to pay their bills.

And again, in areas of Texas, we’re talking hundreds of thousands of dollars in Tucson, $80,000 out other Midwest cities, tens of thousands of dollars a piece because they had to pay up front for the extra security guards, the extra police officers, the overtime, the shutting down the city, all of these things cost a lot of money. And the Trump campaign, because these are campaign rallies is required to pay for them. But they’re not why because Trump is running his campaign exactly. As he ran his businesses, how many times over the years was Donald Trump taken to court? Because he refused to pay his contractors. He refused to pay his bills. He just didn’t want to give people money. He has money. They want money. They did a service form. But if I do that, then I don’t have my money anymore. That that makes no sense for me.

Why would I give you my money? Because in Trump’s world, all that matters is that he gets what he wants. So he doesn’t have to pay you for doing the job. Even though contractually legally, he is obligated to pay you for your service. So over the years, he has been sued countless times from contractors saying, well, you hired me to do a job and then you just straight up, didn’t pay me. And now we’re seeing it translate, not just with the Trump organization, but into the Trump campaign, costing cities, all of these, all of this money going there, costing them their time and their effort and their energy, their resources, their resources. And then even four years later, straight up saying, yeah, we’re not paying this, but Hey, we’re coming back and we’re going to do it again. And then we’re going to owe you even more money. And we’re never going to pay you because what are you going to do?

The good luck with that. We’ll just declare bankruptcy. That’s what we do best. That’s the thing Donald Trump does better than anybody. Else’s declare bankruptcy. And that is why corporations and businesses and people like Donald Trump do it. They do it to try to avoid liabilities. That’s going to happen, Mark my words. And it’s going to happen quick too. Especially considering the fact that the campaign’s apparently out of money anyway, having to cut ads in swing States that Trump can’t win the election without winning. They have no money. They’re running out of money. They’re not paying the bills that they are still due from 2016. And they’re going to declare bankruptcy to try to avoid the lawsuits. Hopefully, hopefully there’s enough non Trump judges left in this country to allow these suits to move forward. And if they can’t get it from the campaign, hopefully they’ll allow them to take it from Trump himself.