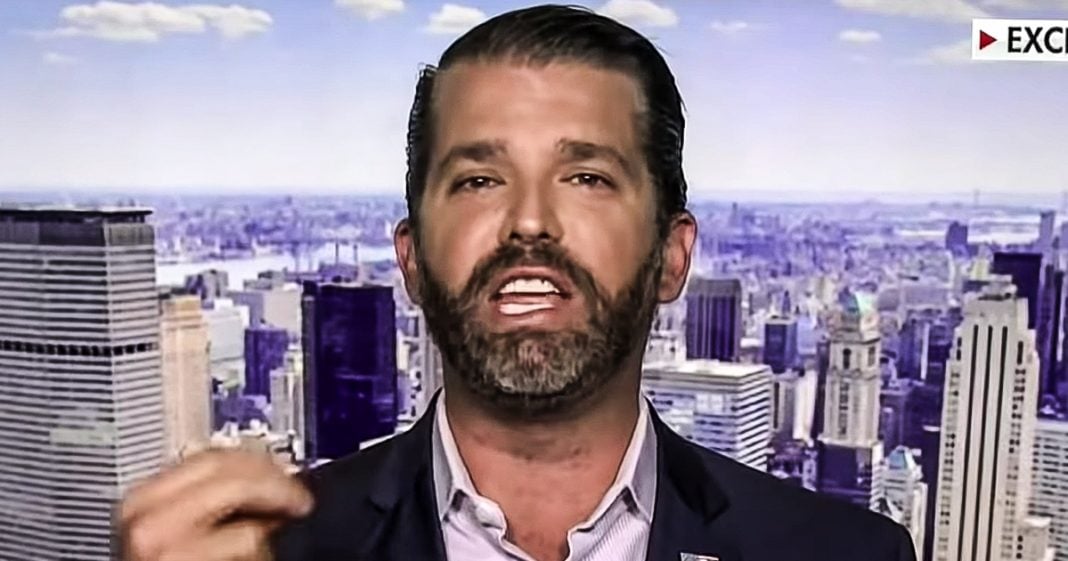 During an interview this past weekend with Fox News’s Maria Bartiromo, Donald Trump, Jr. said that his father’s next move will likely be to “break up” the FBI. This is obviously in response to Trump’s belief that the FBI is out to get him, a claim that has repeatedly failed to live up to scrutiny. Trump has had the opportunity to actually reform the FBI, but he has failed to do it, as Ring of Fire’s Farron Cousins explains.

During an appearance with Fox news host Maria Bartiromo this past Sunday, Donald Trump jr. Suggested that if his father wins reelection, one of the first things, one of the first orders of business in a second term of Donald Trump is going to be breaking up the FBI. Now, here is what Trump jr. Had to say Specifically, They refuse to acknowledge their own corruption. Yeah. Pot meet kettle. Right? And the reality is, I think when Donald Trump wins, he has to break up the highest level of the FBI. He has to get rid of these things. And more importantly, maybe break up the swamp in general, you, I love that the swamp, like it doesn’t even mean anything, but his idiotic supporters love it. They love the thought of this Swamp, you, this,

This mythical thing that they can’t quite identify, they can’t quite tell you what it is or what makes up the swamp, but trust them, it’s there and they’re getting rid of it and draining it and adding to it at the same time. Right. Listen, Hey, break up the FBI. How? Yeah, actually that’s a great idea. It really, and truly is this is a government agency that has been involved in some truly horrific abuses to the United States constitution for decades. I mean, basically since its inception, the FBI has absolutely shat on the constitution and violated our most basic rights since day one, you know, trying to blackmail people like Martin Luther King, jr. Trying to threaten them, trying to get them, coerce them into committing suicide, spying on activists. Something that literally still happens today today. I mean, we’ve had reports of that in the past month. So yeah, the FBI is

Crash, but that’s not why Donald Trump and Donald Trump jr. Want to break it up. And that’s the problem. If they were coming out and saying, listen, this organization has been spying on American citizens. Using the Patriot act passed by my predecessors to spy on you, to listen in on your phone calls, to get your text message records, to check your emails, to do all that. This has to go, we got to break them up. We got to do something. If that is what he was saying to people, I would be on board, but no, they want the FBI broken up for one reason. And one reason alone, because the FBI is investigating. That’s why they don’t want to be investigated. They don’t want to be caught doing their crimes. So they’re not actually worried about the FBI doing their crimes. They’re worried about the FBI uncovering their crimes. If that makes any sense.

If the FBI, his only crime was committing their crimes, the Trump crime family wouldn’t wouldn’t care about that. They don’t care that our civil rights are being violated. They care that they may end up going to prison. And that’s when it becomes a problem doing the right things for the wrong reason is still kind of wrong. So you can’t call for breaking up the FBI, but base it on something that’s totally false. Like buying on me. They didn’t actually spy on you. They didn’t. They spied on the criminal that you had in there based on mountains of evidence that you’ve repeatedly had investigated. And so far, nobody’s been able to find any wrongdoing in any of that.