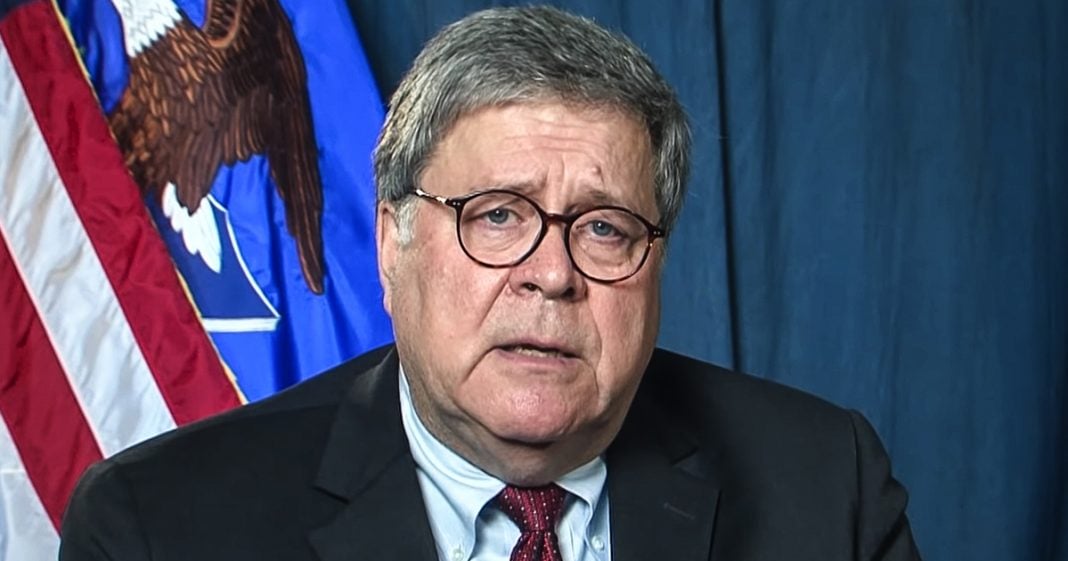 According to a report from The Washington Post this week, Donald Trump is allegedly thinking about firing both Attorney General William Barr and FBI Director Christopher Wray because neither of them are willing to investigate Joe Biden. The REAL problem is that the President has been catered to so much by his cabinet that he takes it as a personal sleight when they do not bow down to him. Ring of Fire’s Farron Cousins explains what’s happening.

According to a major report from the Washington post this week, Donald Trump is allegedly considering, and probably considering simply out of anger, uh, firing both FBI director, Christopher Ray, and shockingly enough attorney general William Barr. That is what the Washington post sources inside the white house told the post this week. And the reason is simple it’s because these two men, the head of the FBI and the head of the DOJ have not been able to lock up Donald Trump political enemies. And of course, because Joe Biden is still a free man and Donald Trump’s furious about that. Donald Trump insists, he insisted all through last night’s debate. Joe Biden is committing crimes. Look at the text messages. And then you look at the text messages and realize that all of these took place after Biden had left office. And none of them even include illegal activity. This was literally a private citizen working on a business venture. You may not like it. You may hate the revolving door of it. You may think it’s unethical, but nothing about it is illegal or improper technically. And none of it happened while he was vice-president.

So there’s no, there, there, but Trump wants there to be a there, there, but there’s there’s there. Isn’t a, there, there, there just some text messages from 2017 after months after Biden had left office and nothing even came of it anyway. So what’s the point, but that’s why Donald Trump is getting furious. And I think that’s why if he threatened to fire these people, I think that’s why he did it because he knows there’s nothing there. He knows that these men have been unable to come up with anything. And that’s why it’s a little shocking to that. Bill BARR would be thrown into the mix. Cause BARR has been a very loyal lapdog to Donald Trump, loyal than more loyal than anyone else he has consistently been there to help Donald Trump do whatever crazy scheme Trump wants to do, you know, to, to punish whatever political enemies Trump wants him to punish. He’s the one who came up with the list of anarchism jurisdictions and the punishments for those people.

Bill BARR is not sitting idly on the sidelines, watching Trump implode. He is actively helping him to implode by trying to help him. So I don’t think Donald Trump is serious about this. I think he’s getting angry cause he’s getting desperate. And that is something that obviously we have seen happening for several weeks. Now, the man is getting far more desperate. But yeah, We’re also starting to see how crazed he is. It is not the job of the DOJ to go after Donald Trump’s political. Yeah. Enemies. It is their job to investigate. Yeah. Prosecute federal crimes. That’s what they do. They have on many different occasions, not just them, either the Senate as well. And they’ve both come up with bupkis. They have investigated Joe and Hunter Biden. They have looked into this Ukraine issue. They have looked into the business dealings. They couldn’t find anything that was prosecutable. They couldn’t find anything that was even worthwhile enough to announce to the public.

Folks. That’s what we’re dealing with here. I don’t care if you agree with Biden’s politics or you disagree with them, he didn’t commit any crimes. At least that we know of none of the available evidence so far suggested that an actual crime was committed. And the public doesn’t seem to care that much about this scandal. Anyway, I don’t know if it’s because they understand that no crime was committed or if it’s simply because they are as Biden pointed out last night during the debate, more concerned about the fact that they can’t pay their fricking bills. Cause we’re in the middle of a pandemic and a massive recession. I think that he’s a little bit right about that. People would probably be more concerned about their own needs rather than some phonied up scandal that a desperate president is lashing out at his own DOJ because they can’t make it more sensitive. And the reason for that folks is because there’s nothing there.