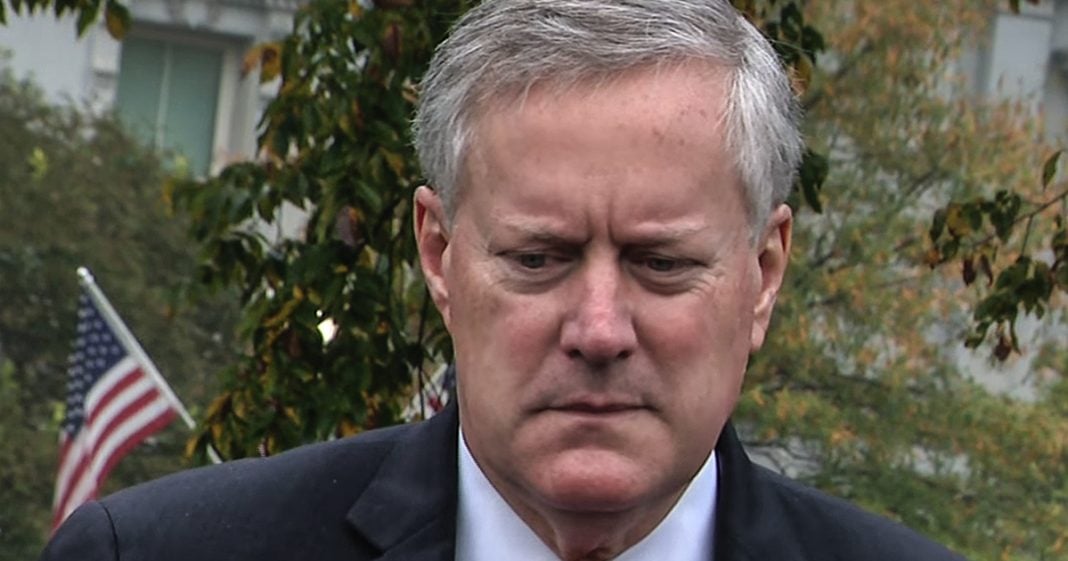 According to his latest campaign filings, Trump’s latest chief of staff, Mark Meadows, may have broken campaign finance laws by spending campaign money on personal items. Meadows is obviously no longer serving in Congress, but he still has reelection money that has to be accounted for, and it isn’t look good based on his expense reports. Ring of Fire’s Farron Cousins explains what’s happening.

Donald Trump’s latest chief of staff. Mark Meadows has now found himself, um, square in the middle of what looks to be a campaign finance scandal, much like a Republican Duncan Hunter, who I believe right now is currently in jail. If not, he’s on his way to jail, uh, for the exact same thing. And according to the records, it looks like Mark Meadows may have done the same thing. So here’s a recap of Mark Meadows, Donald Trump’s new chief of staff in case anybody forgot, uh, Meadows did. In fact, come from Congress earlier this year, he announced that he would not, I think it was this year. Maybe it was last. I don’t know, but he announced he was not going to be seeking reelection. And instead ended up taking the job as Donald Trump’s, uh, Trump’s chief of staff. Um, so he has all this money because when you run and you campaign, you, you have your campaign war, chest, your, your, uh, election money.

And since he wasn’t running you more, he then took that and he switched it over to a leadership pack, uh, which has become very common these days. You know, you’re not running for office, you got this money, you can’t spend it on yourself. Uh, and you obviously, you can’t return it. So what do you do? You just turn it into a leadership pack so that way you can use it, uh, help give money to other candidates, run ads, do whatever, whatever you do to get, get rid of the money, then you dissolve the packs. Are you good to go? That’s how you do it. So you don’t break the law. Meadows. According to the records did about half that he, uh, switched the money over to the leadership pack. And then according to records started buying a gourmet cupcakes, a cell phone, grocery purchases, lavish meals, thousands of dollars at a Washington jeweler.

And of course, lodging at the Trump international hotel. Now, I don’t know if these things were to help another candidate with his leadership pack or, or maybe to create a campaign ad, but I’m willing to bet. No they weren’t. And this reeks of the Duncan Hunter scandal, doesn’t it folks where we found out, Oh, look, he’s buying these food. He’s buying groceries. He bought stereos. He’s playing golf by a new golf shorts. And then Duncan Hunter though, tried to pin it all on his wife and his wife ended up rolling on him, the tour now. Oh, and Hunter also used some of the money to cover up an affair, uh, which is why his wife ended up rolling on him and said, all right, listen, here’s the deal. I don’t know if that’s going to happen in Meadows. I don’t think the dude had an affair, but, uh, it sure as hell looks like he was abusing, uh, his campaign finance money.

But you know what, at this point like this is fitting. This is exactly what we’ve come to expect from members of this administration. And what’s even funnier is that this likely would not have happened. Had Meadows not decided to stop running for Congress and instead take the job in the Trump administration. Like the dude was on the level, disagree with his politics all day long. Absolutely. But he was on the level as far as we know, until he decided to join the Trump team. And then he was like, sweet. I’m part of the crime family. Now I’m a made man. I can do all of these things. I’m going to go to the jewelry shop who wants some cupcakes it’s on me. And the worst part is like, there’s documentation of all of it. So who knows, maybe he’ll go the way of Duncan Hunter. Maybe he’ll get off easy. Maybe all of this is legitimate verifiable expenses. Sure. That’s always a possibility, not likely, but it’s a possibility, but folks we’ve said it once we’ve said it a hundred times. When you lay down with the trumps, it always ends badly for you.