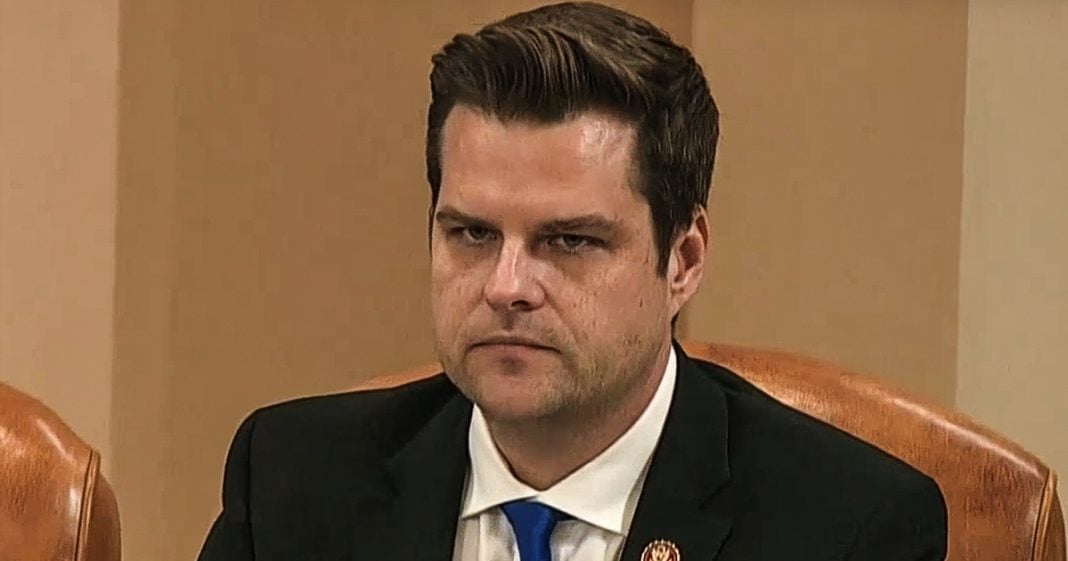 Republican Congressman Matt Gaetz just can’t seem to keep himself out of trouble, and he has once again found himself in a bad spot. According to campaign records, Gaetz was clearly given a massive discount on rooms at the Trump Hotel in Washington, D.C. during the Republican Convention. And while it may seem petty, this is actual a violation of campaign finance laws, and Gaetz could get in serious trouble for accepting this “in kind” campaign donation. Ring of Fire’s Farron Cousins discusses this.

This evening, uh, Congressman Matt Gaetz is going to be peer appearing, uh, along with Donald Trump at a rally in Pensacola, Florida, which happens to be where I am right now. Uh, Matt Gates is our congressmen and demands, no stranger to scandal, right? I mean, he’s, he’s had the scandal of the studio and his dad’s house that taxpayers are paying for, for some reason. So Matt Gaetz can go on TV. He had the issue with alleged witness tampering by threatening Michael Cohen the night before he came on and did his testimony in front of Congress. And, uh, then of course, we had the issue of Matt Gaetz, uh, where he violated house ethics rules for paying money to a man by the name of Darren Beatty, who happens to be a former Trump staffer. He paid him for speech writing, which members of the house can’t do.

Oh, he’s also a suspected, uh, huge racist. Uh, so there’s those. And then of course, right, as he’s about to meet with Trump today, a new scandal for Matt Gaetz to have to deal with in his full four year tenure and the house, are we talking about his fourth, you know, pretty major scandal, according to the latest scan order appears that Matt Gaetz may have accidentally accepted an in-kind campaign contribution from the Trump organization and failed to report it. Here’s what happened. But during the Republican national convention, Matt Gates traveled to Washington, DC stayed at Trump international hotel, and he paid a grand total of $216 and 20 cents per night, according to his own, uh, campaign filings. So he did report. Look, I stayed here 216, 20 a night, nice hotel, you know, I’ll probably rate it on Yelp. Pretty good, a pretty good review.

It’s just one problem with that reporters started looking into it because they thought to themselves, wow, $216 a night at a Trump hotel in the middle of Washington DC during the Republican convention. No, it can’t be how much this, this place was charging. So they looked into it and sure as hell wasn’t, um, they were charging a $795 per night at a minimum up to $2,070. Um, so how did Matt Gaetz get a room for, for two 16 that doesn’t make it if they gave him a discount folks that does turn into an in-kind campaign contribution, because anything you give to a candidate, anything you give to a politician is seen as having a financial value. And if that financial value is not reported, or if it exceeds the individual contribution limits that is against campaign finance laws. And it’s very clearly obvious that Matt Gaetz did in fact receive some kind of discount from the Trump organization.

Now we’re not talking about felony criminal activity here, folks, uh, this would be failure to disclose that’s what this is. Um, nothing too major, really, to be honest. Um, but it does show that Matt Gaetz is still not being completely honest about what’s happening. It, rehashes all of these other scandals that this man has had. And I do firmly believe if he were running anywhere other than our, you know, uh, blood red district here in Northwest Florida, he never would have stood a chance at winning. I mean, this guy’s sorted history of daddy, you know, having cops fired to get him out of his DUI. You know, all of the little scandals here and there, the, the scandal of the studio, the scandal of using tax dollars to hire a speech writer. Now, the Trump hotel thing, all of this, any of this back in the day would have ended somebody’s political career. And if he were running in a district that wasn’t filled with, uh, Republicans, he wouldn’t be a politician. We wouldn’t be having this conversation today, but I do take a little solace. In that fact, I may be stuck with Matt Gaetz down here in our really horrible district because of that, uh, for a long time. But I don’t think Gates has enough popularity or charisma to win anywhere outside of this district. So his ambition dies here and that’s a good thing for America.