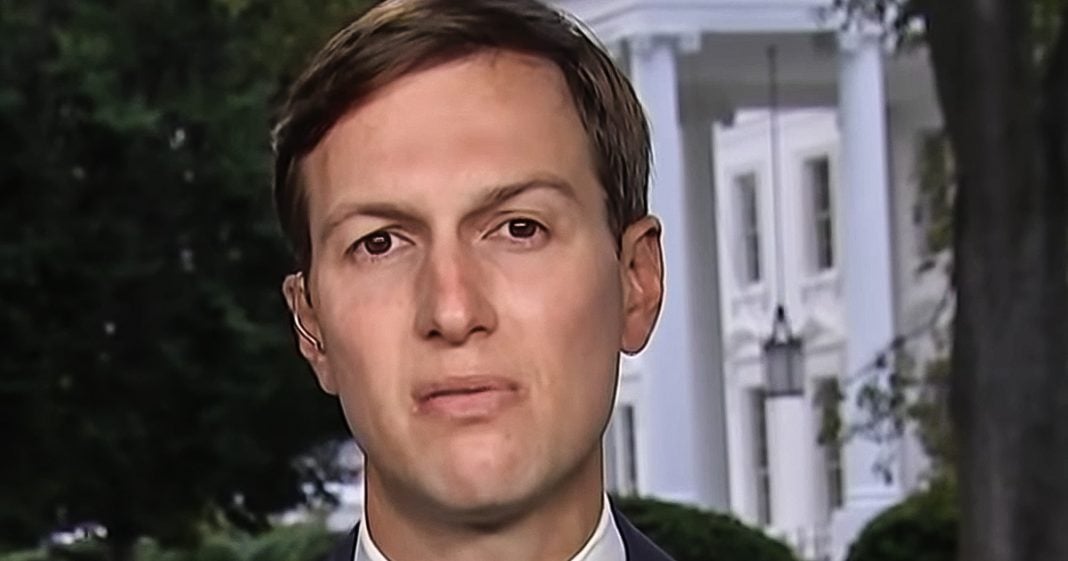 According to multiple sources who spoke with Business Insider, Jared Kushner is wanting to launch a Trump-themed media outlet, possibly as soon as after the election. This could either end up being a complete failure, or it could ensure that Trumpism lives on even if the American people vote it out of office next month. Either way, the world doesn’t need this to exist, as Ring of Fire’s Farron Cousins explains.

According to a new report by business insider, Jared Kushner apparently for the entire year has been floating the idea of a Trump themed news network that could launch as early as next year. And it’s really not even dependent upon whether or not Donald Trump wins or loses the a 2020 election. Jared Kushner just thinks, according to the conversations he’s been having with Republicans, that this would be a good business venture. Now here’s the thing. Uh, there’s been lots of speculation all throughout Donald Trump’s presidency that once he leaves office, he would eventually probably make his way into the conservative media arena. And because Donald Trump does not like taking orders and because he does allegedly have lots of money, uh, he would probably launch his own network or invest enough into one where he would become, you know, the, uh, top guy there possibly the OANN network that he loves to, uh, talk about so much, but is there really, is there really a market for it?

That’s the big question, because we’d like to think that no, there isn’t, this would be a horrible business venture, lose millions and millions of dollars, and then ha you don’t have an outlet and you lost a lot of money, but the truth is folks. This would actually be very dangerous. And unfortunately I do believe it would be very successful. I think there are enough people in this country who subscribed to, I guess, what we would call Trumpism that would be able to keep a network like this afloat, should they decide to go in that direction? Now here’s the scary part about that. Trump is the culmination of decades of failed Republican policies and Republican extremism. He is the end result of that. Now, once he leaves office, his unique brand of Republican horribleness goes with him. Now that doesn’t fix any of the problems with the Republican party at all, or any of the problems that led the Trump, but it does get rid of his unique horribleness.

Should he launch this network? And should he be on TV every day, or have his acolytes on TV every day that horribleness lives on and it evolves and it gets worse. That’s the true danger of this. Imagine, you know, we already have Fox news that has several hosts, Tucker Carlson in particular, uh, that love to go out there and just spread pure propaganda BS. And what’s happened to those people. What’s happened to Tucker. He’s lost a ton of advertisers. Sure. He’s also the highest rated person in the history of cable news. Now it worked, he goes out there and tells us that immigrants make the United States dirty or something. Donald Trump loves to imply, and he gets rewarded with more viewers. There’s enough people that subscribe to that horrible way of thinking that could keep a Trump themed network, uh, in play. And they could help spread these dangerous toxic beliefs far beyond where they’re being spread right now and keep them alive for a generation. And that folks that is a terrifying thought.