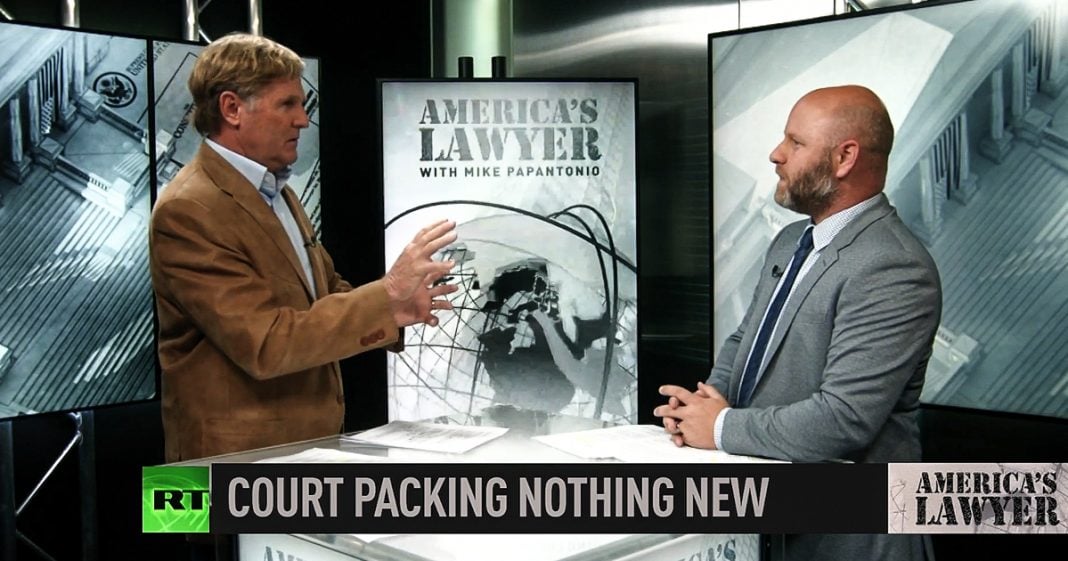 Via America’s Lawyer: While democrats are being grilled over the possibility of packing the Supreme Court, republicans have been quietly packing federal courts across the country for years. Mike Papantonio & Farron Cousins discuss more.

Mike Papantonio:             Democrats are avoiding questions about court packing as the election nears, but court packing is as old as government itself and more common than you think. And the masters of court packing are Republicans. If you look at, the average American looks at SCOTUS, they look at the federal, sometimes they look at federal appointments, but they don’t, they forget about state appointments. I mean, you talk about packing, the court packing state to state has been incredible by the Republicans and the Democrats sit there twiddling their thumbs and talk about something completely unrelated. What’s your take, what is your take?

Farron Cousins:                  Well, you know, the Washington Post, believe it or not, actually did a really good layout of what’s been happening state by state over the last few years recently. And they pointed out that, look, if you go to Georgia or Florida or South Carolina or Iowa or Pennsylvania, Alabama, any of these States, you’re going to see that over the years, there have been these court packing efforts where when Republicans in power can’t get their way, what do they do? Well, we’re just going to add two seats to the Supreme court. We’re going to add five seats. Oh, we’re going to take some seats away or try to take some seats away. Democrats have done that, tried to take seats away because the courts to them, it’s just a political tool to achieve their goal. And if it’s not working, you change the tool. You use a different tool. You add more to it. That’s what they do.

Mike Papantonio:             Right. Specifically, you’ve got Georgia added two, they went from seven to nine, adding more judges so they could, it’s all ideology. Those judges aren’t ideologically lined up with this. So we’re going to add two more. Doubled in Florida, there was an attempt to actually double from seven to 15, actually more than double, went from seven to 15, and that failed. But you go to Iowa, as you pointed out, the attempt was made. South Carolina, these are all Republican efforts, but the Democrats doing the same thing, it’s an ideological war taking place in the states.

Farron Cousins:                  You know, that is a relatively, there’s people alive today who remember a time when we didn’t have nine Supreme Court justices. More were added to help with the, I believe it was with new deal.

Mike Papantonio:             Well, not only that, but you’re, the, the, the Republicans have been smart enough to add really young people.

Mike Papantonio:             I mean, their, their goal is, let me get somebody as young as I can on the court that has qualifications. They’re going to be there a millennium. Everything’s going to be okay for our politics.