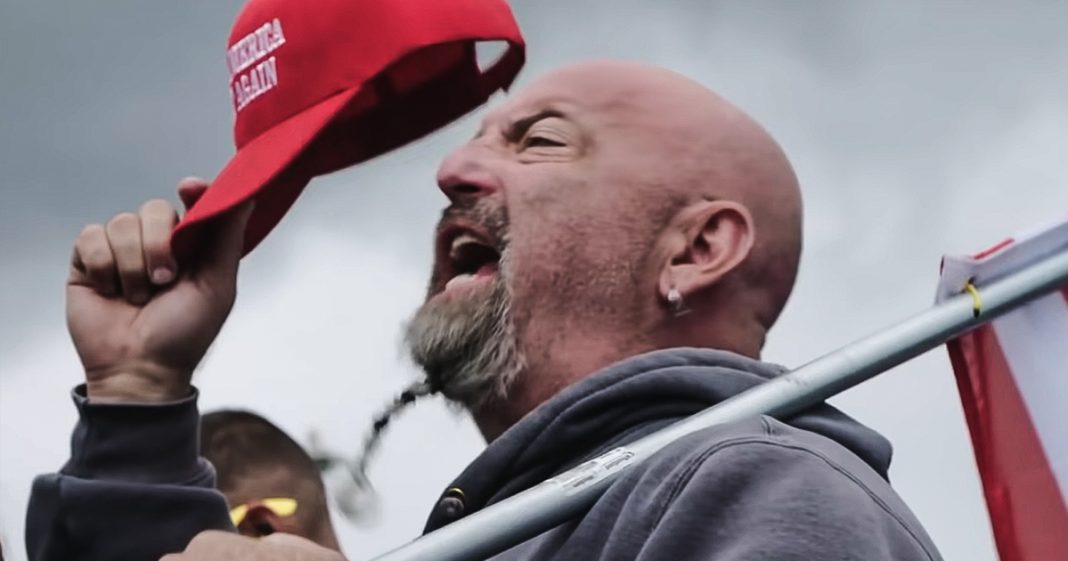 Emails claiming to be from the Proud Boys have been received by some residents in Florida, threatening that if they vote for anyone other than Trump, they will be targeted by the far right group. The emails were apparently sent using an Estonian internet infrastructure, and the Proud Boys have denied any involvement in the action, allegedly going as far as to report it to the FBI. Whatever the case, Florida voters are concerned. Ring of Fire’s Farron Cousins explains what’s happening.

Yesterday news began to break about emails that residents of Florida and in a couple of other States had been receiving allegedly coming from the proud boys organization, threatening them to quote, vote for Donald Trump or else. Uh, here’s the text of what those emails said. We’re in possession of all your information, you are currently registered as a Democrat. And we know this because we have gained access into the entire voting infrastructure. You will vote for Trump on election day, or we will come after you change your party affiliation to Republican, to let us know you received our message and we’ll comply. We will know which candidate you voted for. I would take this seriously if I were you good luck. Now the FBI, uh, Homeland security came out. They did a press conference yesterday afternoon and they said, don’t worry folks. We have traced this back to Iran.

Iran is responsible for all of this, not the proud boys. We launched an immediate investigation that we were able to conclude in a matter of hours to clear the proud boys name. Here’s the thing. Um, maybe right. They were using a Stony in servers. Uh, the emails actually came from an Estonian, uh, bookseller. So those servers were likely hijacked by somebody to mask where they were actually coming from. Uh, so maybe Iranians did this through Astonia or they also said maybe there’s, you know, worth for them. Maybe it’s Russia, maybe it’s China. Maybe you have a Saudi Arabia who knows, but they know for certain it was not the proud boys, everybody stop saying it was the proud boys. Here’s the thing. I don’t think the proud boys would send something like this in a serious manner. What I do think that they would do is send it out in a manner that makes it look like it’s coming from the left.

Pretending to be the proud boys. I think that’s 100% possible. Is that likely what happened? No. This was likely a foreign. I mean, let’s be honest about that. Unless of course again, the proud boys were trying to act as a leftist acting like the proud boys again possible. Maybe not probable. So who knows, but here’s the thing. Folks. We are down to the wire. We do have reports, credible reports from the government saying that there are countries out there who are interfering to benefit Trump there’s countries who are interfering to benefit Biden. China wants Biden. Russia wants Trump, all these other countries across the planet. Everybody’s apparently able to get into our system because we’re so damn weak. And why are we weak? Because Mitch McConnell repeatedly over the past years, refused to increase election security and voting infrastructure security here in the United States. You don’t have to pay attention to any of these letters. You don’t have to feel threatened.

Nothing is going to happen. Okay? That’s something people need to understand. These are probably not coming from the United States. And even if they are, it’s a threat and nothing more report it absolutely to the authorities, but do not live in fear of this. What you should live in fear of live in fear of, excuse me, is a Mitch McConnell continuing to sell out this country to allow us to be vulnerable to these kinds of attacks, because he knows that at the end of the day, Republicans are the ones who benefit the most from them. That’s why he hasn’t taken any action in the past four years. And that’s just another reason why this man doesn’t deserve to keep his job after this election. Unfortunately, he is up against a pro Trump Democrat in Kentucky. So we’re probably looking at six more years of a Mitch, the turtle, doing nothing to actually help Americans.