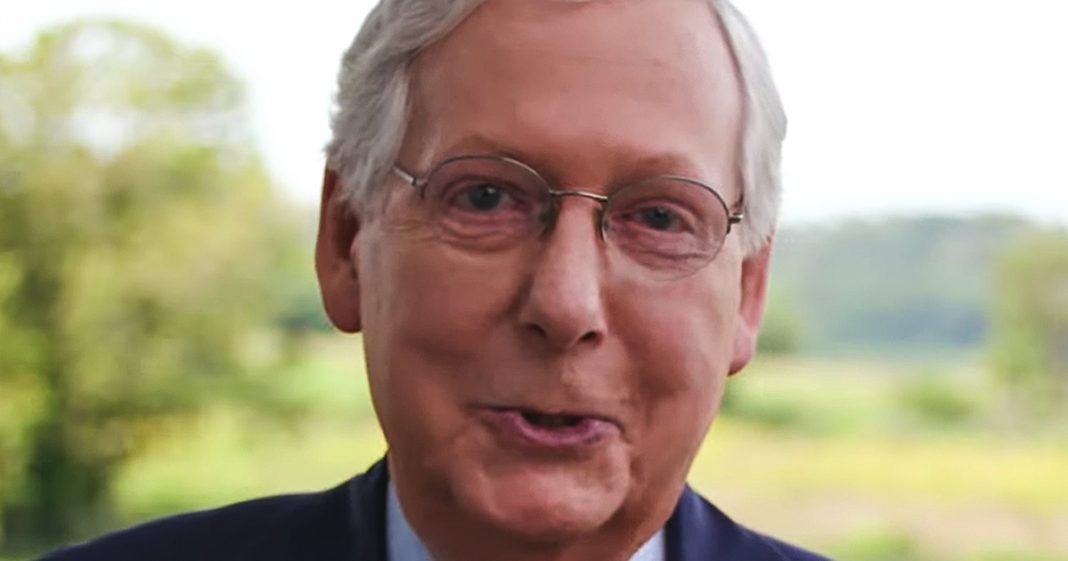 Mitch McConnell has apparently admitted to his fellow Republicans that he has been sabotaging COVID relief talks with the White House in order to get Amy Coney Barrett confirmed to the Supreme Court. McConnell believes that if a new stimulus deal is reached, it will divert Senate resources away from the confirmation and towards the pressing issue that Americans are hyper-focused on right now – and it’ll also force McConnell to choose Barrett over the relief bill. Ring of Fire’s Farron Cousins discusses this.

On Tuesday, Senate Republicans held her little closed door lunch for one another is nice and cute. Uh, but anyway, during this little launch, Mitch McConnell got up and he explained to his Republican colleagues in the Senate, why he didn’t want a deal to pass on new COVID relief. Here’s what he told the group. He said, listen, I have been talking with president Trump, encouraging him to not reach a deal with Nancy Pelosi. So before I go any further into what Mitch McConnell said, Mitch McConnell, Republican majority leader of the Senate admitted to his colleagues that he has been telling the president of the United States to not make a deal. And he continued. And the reason for that is because I didn’t want it to interfere with our rushed and hurried confirmation of Amy Coney Barrett, because here’s what would happen. Folks. The only thing Mitch McConnell cares about right now and has for the last few months, uh, is confirming judges.

There have been plenty of times, you know, during this shutdown, during the times when Congress was on recess, the Senate was on recess, uh, because of the pandemic, Mitch would call him back to confirm more judges. It just so happens. This one’s a Supreme court judge, and that is, you know, about the highest you can get. So obviously they want this to happen immediately. They want her in place for the election in case there is a contested election. So that way she can make sure Trump gets another four years and they have another four years to do whatever the hell they want with the country. So what would happen if they passed a deal? Well, Mitch McConnell would then have to deal with that instead of fast-tracking Amy Coney Barrett. And he don’t want that. He wants to make sure they get Barrett in place because that’s more important by the way, then helping the tens of millions of people who don’t know how they’re going to pay their rent in a week and a half. The tens of millions of people who are struggling each month, trying to figure out which bill they’re not going to be able to pay that month. We are in the middle of a pandemic. We are in the middle of a recession and we have a leader in the Senate who says, I don’t give a damn, I want to make sure I secure the conservative majority on the Supreme court for the next 30 years. That’s what I care about.

Anyone who votes for Mitch McConnell in the state of Kentucky, you’re a sellout. You are selling out the United States. You are selling out every single one of us. And frankly, since I’m already hyped up on this crap right now, I’m going to tell you that it’s bullshit that somebody from the state of Kentucky gets to hold the rest of the goddamn country hostage. And I don’t mean that to shit on Kentucky at all. But what I’m saying is you’re talking about a state with a handful of people compared to States like where I am Florida, tens of millions of resonance, Texas, tens of millions, California. Even more than that New York, same thing. And we’re all being held hostage by this little turtle looking motherfucker who says, I want to make sure that I have the Supreme court secured and I don’t give a damn if people can’t pay their bills, I don’t give a damn. If they get evicted, I don’t give a damn.

And if you vote for him, you are selling out this country for a Supreme court seat. That’s going to be Mitch McConnell’s legacy. Nobody’s going to look back fondly and be like, Oh, I’ll remember Mitch McConnell. No, they’re going to be dancing on his grave right after he goes inside of it, which I promise you, you give him another six year term. He’s probably not coming out of the other side of it. If you’ve seen that, man, he looks like he’s already half dead. The last press conference he did the other day, his face was dead white. Like he didn’t have any blood circulating in his body. Look at the closeups of his hands. If you haven’t see those, go look at my Twitter, feed the pictures of his hands, where they’re all bruised and bloodied in bandages and bandage. What the hell is happening to this man? He is not well physically or mentally, but sure. Let’s let him hold up. Relief for the 325 million Americans who don’t live in Kentucky.