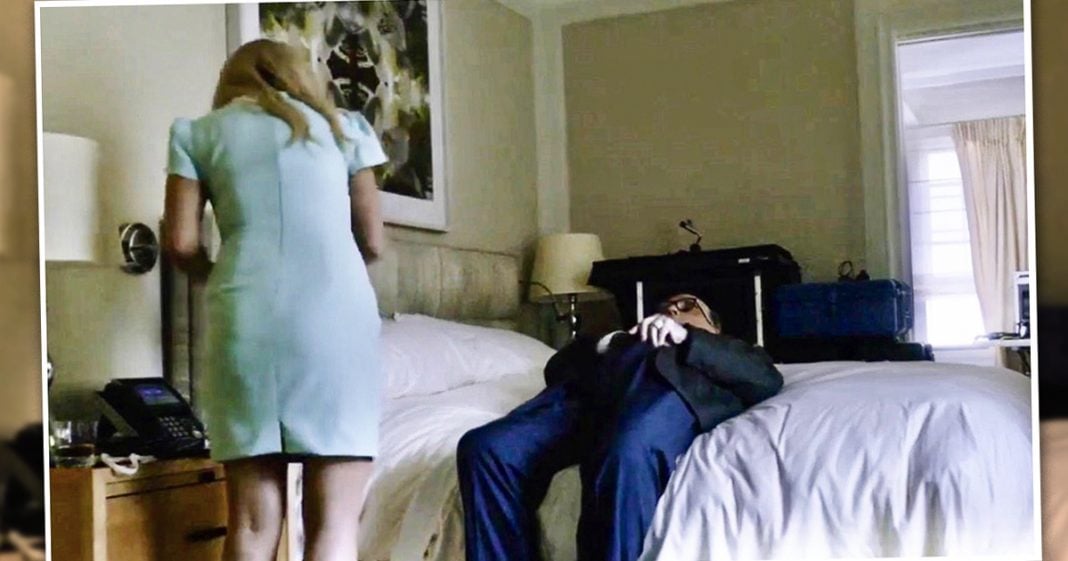 The new movie Borat Subsequent Moviefilm will be available to stream on Friday, but one of the biggest reveals in the movie is already making headlines. Rudy Giuliani, the current attorney for the President, is caught with his hand down his pants as a young woman posing as a foreign, right-wing reporter stands over him after apparently getting him to come to her hotel room. Without giving away too many spoilers, Ring of Fire’s Farron Cousins explains what’s happening and how it may change the remaining days of the Presidential race.

So Rudy Giuliani, uh, back in the news again, I’m sure everybody by now has read about what’s going on, but if not buckle up, things are about to get weird. It all started several months ago, actually, when Rudy Giuliani had called the police in New York, when he was in the middle of an interview with a young Eastern European conservative or so he thought, okay. Doing an interview and then bore at, came running through Sasha Baraka, uh, Baron Cohen dressed as bore out, came running through the interview. Uh, Rudy Giuliani thought it was a scam or a shakedown didn’t realize it was bore at, at first. Uh, so he called the police and that’s the story we had known up until yesterday. Turns out that was like such a tiny little sliver that it didn’t even come close to telling any real part of the story. So here’s where the story picked up yesterday. Yeah. Everything Giuliani had said back in June or July, whatever it was was true. And then it took a weird turn.

The young woman who was also an actress, uh, portraying Borats daughter in the film that actually is going to begin streaming tomorrow, a bore at a subsequent movie film or, or at two, uh, she was an actress playing a role. And well, I think the best way to tell the story is just read it. So this is straight from the daily beast, uh, posing as a conservative journalist in the mold of Tomi Lahren, albeit with a strong Eastern European accent, uh, Tutu are sits down with Giuliani and a Manhattan hotel suite for an interview in which she mostly flatters him into creepily flirting with her. I’ll relax. You, you want me to ask you a question? Giuliani says, as she goes on response after blaming China for the coronavirus, he agrees to quote, eat a bat with his interviewer who repeatedly touches his knee to egg him on Baron Cohen. First interrupts the interview, dressed as a sound engineer with a large boom mic, but leaves before it’s over at that point to tar offers to have a drink in the bedroom with Giuliani who happily obliges on what appear to be hidden cameras.

We see Giuliani remove her microphone and ask her for her phone number and address. As he sits down on the bed, he starts patting her backside. As she removes the microphone from his pants, Giuliani then lies down on the bed and start sticking his hand down his pants and a suggestive manner. But before anything could happen, bore at bursts into the room and shouts put down your charm, his preferred word for, you know, uh, she’s 15, she’s too old for you. And, uh, you know, I don’t want to give anything else away about the movie. I don’t like doing spoilers so you can stream it tomorrow, um, on whatever platform is going to be on. I believe prime, but I’m not sure. But anyway, uh, Giuliani yesterday was forced to come out and say it was not sticking my hand down my pants to do what you all think I was doing.

I was talking in my shirt. Okay. Which is weird because I mean, if you look at the picture, you can see the picture. That’s the picture. Uh, that’s not how you tuck in a shirt. I mean, maybe that’s how you talk in a shirt, but I’m pretty sure if you lined up a thousand people and told them to talk in a shirt, not a single one of them would do it in that manner. You did ask for her phone number. You did ask where she lived, you were interested Rudy, and the whole set up to this premise. You went up there to have a drink with this young woman who, by the way, contrary to what some people are saying, he did not think she was 15. Um, and that is explicitly clear. And most of the articles about this, she never told him she was 15.

He never was led to believe she was 15. He had no reason to think that she was underage. So, so let’s get that part of the story clear. The rest of it is true. Him thinking he was going to sleep with a 15 year old. That is false. That didn’t happen. Um, but either way, he’s got some explaining to do, and it’s gotta be a little bit better than a, I was just tucking in my shirt, right? No, the film is going to make you look so much worse, Rudy, because we’re going to see what you said. We’re going to see the interaction. We’re going to see how you followed this young woman up to this hotel room. And by the way, the reason bore at Burstyn at that point was because he was afraid. Giuliani was going to do something. He didn’t want it to go that far.

He could have led it. He should have led it to be honest, because I think the whole world needs to be reminded of what a scumbag Rudy Giuliani is. But from what we have so far did a really good job of reminding us all that. And by the way, let’s not forget the Giuliani got scammed, right? Cause at the end of the day, that’s what this is. It’s a humorous prank, but it’s a prank that Rudy Giuliani, the man who we’re supposed to believe has all this damning evidence about Joe and Hunter Biden. Yeah. We’re supposed to believe that he is not being scammed by foreign governments, who he had according to new reports, shopped this story around too for a year. Yeah. We’re totally going to trust you, Rudy. Cause you can’t even figure out after being, you know, interrupted during your alleged interview that this young, attractive 24 year old wanted to go have a private drink with, you know, Rudy, I hate to burst your bubble man. No, 24 year old woman in this country on this planet wants to be intimate with you. That’s a sad reality, but it’s your reality that you have to face, sorry, I don’t, you know, get to choose which cards you have. I just get to explain them to you.