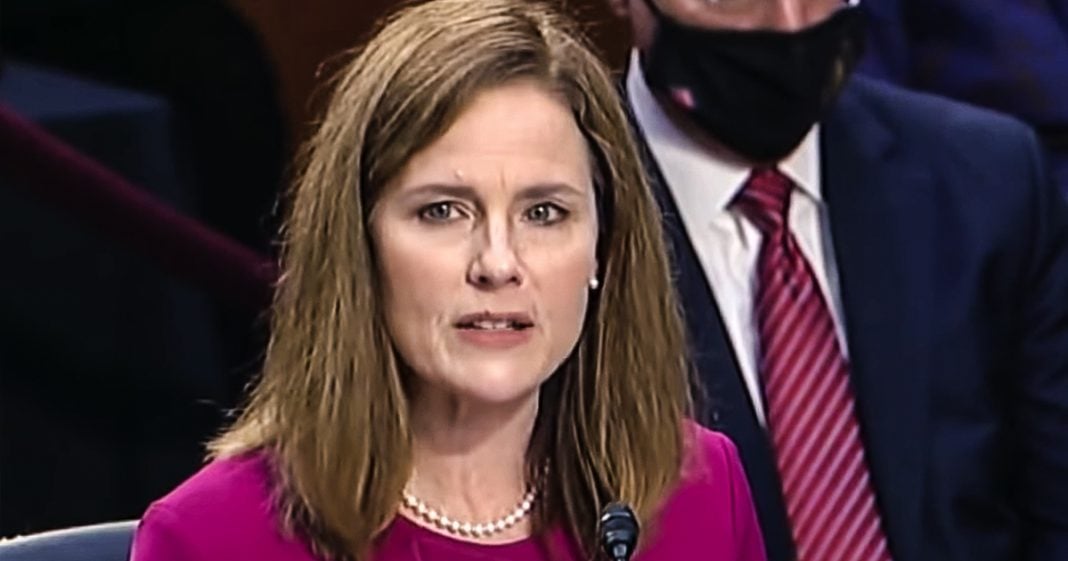 During a written portion of her confirmation testimony, Judge Amy Coney Barrett referred to the science behind climate change as “controversial,” a terrifying statement for anyone who lives on planet earth. This is just another example of the extreme political ideology of Barrett. There is nothing “controversial” about science, though Republicans may often find it “inconvenient.” Ring of Fire’s Farron Cousins discusses this.

With judge Amy Coney Barrett headed towards a confirmation vote. This coming Monday and her confirmation hearings coming to a close today, along with the vote, it’s important to remember several things about this woman. First, she is admitted freely and openly, you know, all by her own volition. That her only role as a lawyer, as a legal scholar, as a teacher and as a judge is to use her role, uh, to help spread Christianity spread. The word of God is a means to an end. The end is God. Uh, so that’s terrifying and that’s something that doesn’t belong in the laws of the United States. I don’t care if you’re religious. I don’t care if you’re not, uh, this country says we’re not going to be governed by religious laws. That’s the rule you would think as a judge, she would know that, but I guess not, you also have our stances, obviously on social issues. She is a horrible person for the LGBTQ communities. Their lives are going to be hell under this woman, a women. Yeah. Stand to lose a lot of rights under Amy Coney Barrett. And then this week we found out that she’s also terrified of science. It was revealed this week in written testimony from Amy Coney Barrett that had a actually taken place a couple of weeks ago, but it was finally released this week.

She referred to the science of climate change as quote, controversial it’s controversial. Science has controversial. No, no opinions can be controversial. Religious beliefs can be controversial. Science facts, data that’s real. There’s no controversy over real NIS. And yet here she is a woman who is unfortunately about to be a justice on the Supreme court, possibly for the next 30 years, telling us that science is controversial. So that kind of gives us a good idea on where she is going to go on any issue that involves science. You know, God forbid she ever gets handed the case involving, you know, the teaching of evolution or the teaching of climate change, which is something that Republicans are terrified of these days. Not to mention the fact that she’s clearly based on her, science’s controversial stance, going to side with polluters, any given opportunity, just like she did when she was on the lower court, by the way. But nobody bothered to look into that record.

Folks. Her stance on the social issues is, is terrifying. People truly do stand to lose their rights, but she is equally as bad on the corporate issue. She’s equally as bad on the science issues. There is no redeeming quality for this particular judge. She has proven that she is not good on any issue. She has proven that she is going to let us be polluted. She is going to let us be pillaged. She is going to let us get financially raked over the coals by wall street banks. And if you’re somebody like me, that’s the extent of the damage. But if you happen to be LGBTQ, you happen to be a woman at all. It’s going to be so much worse for these people. And unfortunately we cannot stop this confirmation unless of course the Democrats decide to hold a vote and impeach William Barr sometime in the next 48 hours. Anything short of that, and she’s going to be a Supreme court justice before the election hits. And if Joe Biden, isn’t seriously thinking about expanding the court, then what’s the point of any of this.