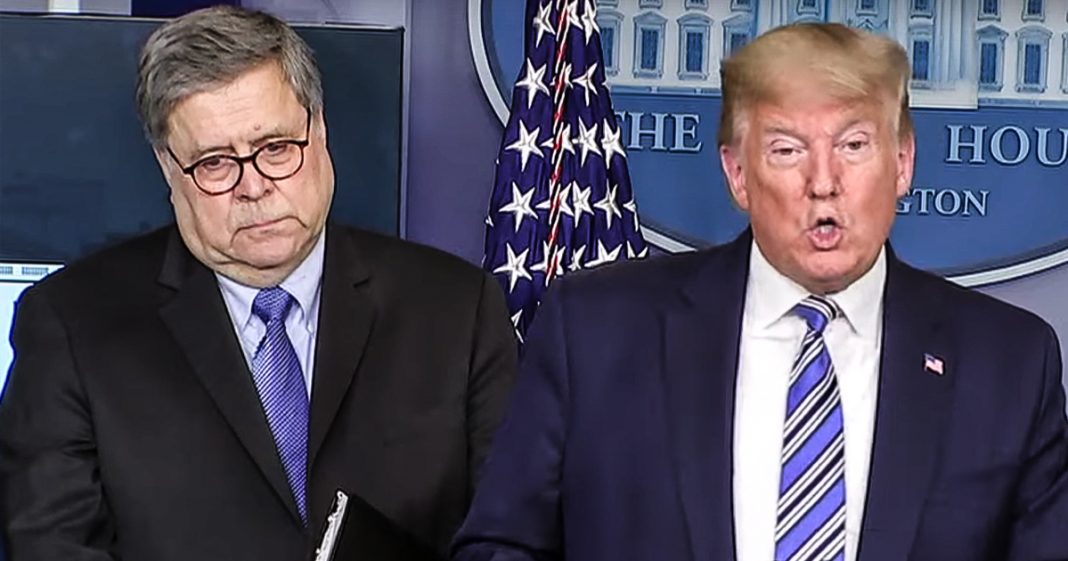 During an interview on Fox News on Tuesday, Donald Trump openly and publicly called on his attorney general, William Barr, to immediately appoint a special counsel to investigate Joe Biden. The truth is that there are actually several Biden investigations taking place right now, and so far NONE of them have yielded any prosecutable evidence. Ring of Fire’s Farron Cousins explains what’s happening.

Yesterday during an appearance on Fox and friends, Donald Trump called for his attorney general William Barr to begin immediately Lee and investigation into Hunter Biden and Joe Biden. And as the president put it, it’s gotta be quick, right? I mean, you know, he had election in a few days here at this point. Uh, so you really, William Barr appoint a special counsel get on this because this is the biggest case of corruption that this country has ever seen. Here’s what Trump said, word for word, we’ve got to get the attorney general to act and he’s got to act and he he’s got to act fast. He has got to appoint somebody. This is major corruption. And this has to be known about before the election. Uh, so you’ve got 13 days to appoint a special counsel, uh, give him some office space there. And the department of justice get them a staff, uh, allocate the computers to him, you know, set them up with secure passwords so they can get in and out of the system, you know, run background checks on them. So you know that everybody’s okay to even go into that building. Uh, then once you’ve done all that, then they can start the investigation. Then they can start, uh, you know, interviewing witnesses and things like that. Go on these international trips, compile a report with all of their findings all within the next, probably 10 days.

All of that. That’s what the president wants. That’s how unhinged this guy is. Aye. Let’s be honest. He’s not, well, he’s not, I’m sorry. He’s not.Here’s. The other part of this, Joe Biden has been investigated. Hunter Biden has been investigated. They’ve been investigated or at least looked into by the FBI. They’ve been investigated by the Republican controlled Senate. They have done all sorts of different investigations, just like they did with it. Ben Gazi, just like they did fast and furious. Oh, we’re going to get them on this. We’re going to get them on this. We’re going to get them onto this. There’s gotta be something here that we could grasp onto her. At least something we can spin to make it look like this committed a crime. And I actually don’t know about fast and furious. I probably shouldn’t have added that one. But Ben Gazi is I think a better example. Um, and nothing years and years and years, and years and nothing, at least with the Mueller investigation, we got some people going to jail and we recouped enough money from those criminals that were working for Donald Trump, that the investigation paid for itself.

Hey, no loss for anybody. Yay. This one. No, we’ve had the investigations. There’s actually more investigations going on right now that so far have not yielded a single thing that is prosecutable and Trump wants more. And why does he want more? Not because he believes that Hunter Biden’s done anything wrong. I mean, Hunter Biden may have done some shady stuff in terms of these business deals, none of it’s illegal and none of it even comes close to rising to the same level of conduct that Trump’s own children have been well, essentially found guilty of. That’s why they’re not allowed to run a charity in New York anymore because they’re scammers they’re on the record as being scammers. A judge has ruled that they are scammers. Judge has never ruled out about Hunter or Joe Biden. So there you have it. Trump’s terrified. And this is his last best attempt at an October surprise, but nobody’s buying it hell the paper that published it, the people who wrote it didn’t even buy it. I think at this point, Trump, and maybe some of his most hardcore supporters believe it, but anybody outside of that tiny circle, including his own intelligence agencies, nobody else buys this story for a second.