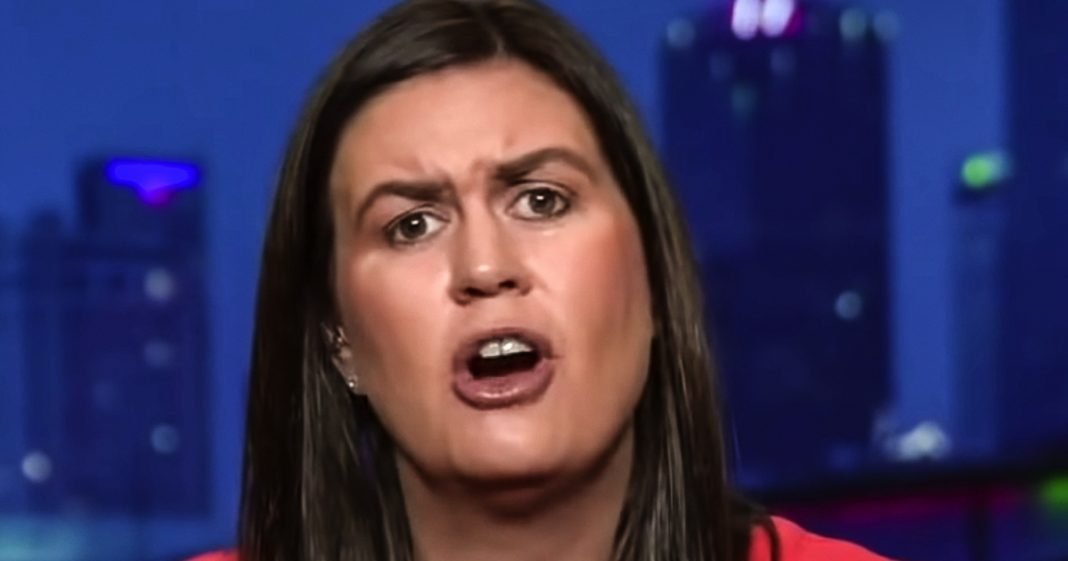 Former White House press secretary Sarah Huckabee Sanders has crawled out from under her rock to inform the world that she doesn’t believe Trump will work with Democrats during the transition if Joe Biden wins the election. This is not shocking in the least bit, and most of us had already expected this to be the case. But hearing the words come out of her mouth confirm the pettiness and juvenile mindset of the President, as Ring of Fire’s Farron Cousins explains.

Donald Trump. Wasn’t the only one getting to go on Fox and friends yesterday morning to make a final campaign pitch to the American public know they even had on former white house press secretary, Sarah Huckabee Sanders, and her interview may have been even more off the rails than Trump’s before her. And here’s why during her interview, Sarah Huckabee Sanders expressed her thoughts, which are similar to what a lot of us on the left have already said will happen if Donald Trump loses the election. And that is, he is not going to work with Joe Biden for a second as part of the transition. I’m sure everybody recalls. Cause this was one of the ones. Most people were finally paying attention to what happens during a transition with Obama and Trump. You know, Trump kind of has to follow Obama around for days. You know, they have to sit, they have to have these meetings.

Some of them televise, most of them not. And essentially the president has to lay out all the roles, all the responsibilities he has to show him around, has to tell them all the deep, dark, horrible secrets, uh, that most of us could only dream of knowing. And Sarah Huckabee Sanders said during her interview that ain’t going to happen. Trump’s not going to work with Democrats and he’s not going to work with them because of all of the alleged chaos taking place at the hands of Antifa over the last few months here is her exact quote. I do think America will be in big trouble if Joe Biden wins the presidency because of the type of chaos and madness that we saw in Seattle and Portland and other places is the type of liberal mob chaos that will take place in communities across this country. Joe Biden has shown he is unwilling and unable to stand up to the liberal mob. Donald Trump has proven time and time. Again, not only is he willing to stand up to them, but he can actually defeat them. He did it in 2016, I’m hopeful he could do it again. And what will be a clear and decisive a win on November 3rd. And we won’t have to worry about that crazy transition of power that could take place.

What is it? Does that mean that crazy transition of power? What are they thinking that these protesters from, from a Washington state are going to do throughout America? If Joe Biden wins, nothing that this woman has, has ever said in her official capacity with the white house or beyond, that has ever made sense. Let’s be honest about that. This woman is not known as a great truth teller that, uh, leaves people feeling like they know what she just said. In fact, I think that’s why she got the job because nobody understood what she was talking about. Her sentences don’t make any sense and she doesn’t even know what she is saying. And I think we just kind of hit one of those things right there. She talks about the transition of power, but the transition of power could be even worse if Joe wins, because then the protesters are going to go crazy. But they’re going crazy now because they hate Trump so much, but he’s already beaten them and there’ll be emboldened if Biden wins. Can anybody follow that train of thought?

No, I didn’t think so. Okay, good. It’s not just me, but this is the level of cuckoo crazy pants that we’re dealing with on the right. And I’m sorry to have to call it that folks, but I’m running out of creative words to describe what these people are. The level of dishonesty we see from them, uh, catapults them way beyond being liars. No, no, no. This is pathological. This is psychological. There’s something wrong with these people. And it’s not just based on one appearance on Fox and friends know this is based on everything we have seen coming out of Sarah Huckabee, Sanders mouth for the last several years. Doesn’t matter if she’s working for Trump or if she’s on her own, she is always going to tell the most outlandish and ridiculous lies that her brain can cook up.