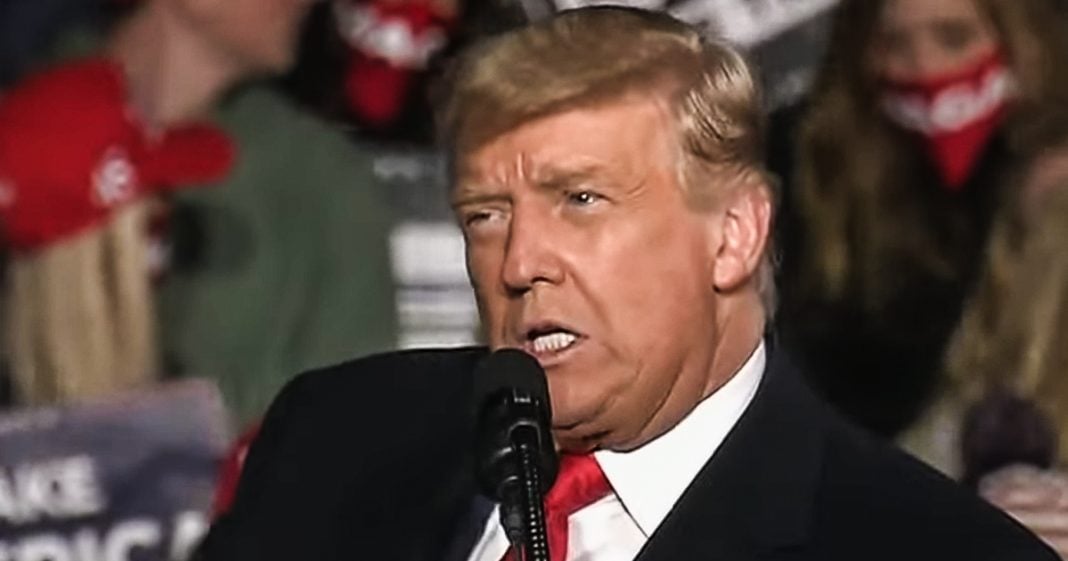 A House committee has released reports proving that Donald Trump was briefed about the resurgence of COVID-19 infections in the United States multiple times in the past few months, even as he publicly told people that everything would be ok and that things were getting better. The President once again knowingly lied to the public in order to make his administration not look like a total failure. Ring of Fire’s Farron Cousins explains what’s happening.

48 States across the country right now, essentially all the two States in the United States are currently experiencing surges. And the number of total daily COVID-19 infections, 48 States seeing a resurgence, most States have already been seeing this resurgence since about the labor day weekend. That’s when things started to go back up, they have not started to go back down yet. A lot of people want to say, this is the second wave, but if you look at the chart, the U S is actually still technically in the first wave. We haven’t hit that second wave yet. Like Europe has that’s what’s happening over there. That second wave is bigger than the first wave. Exactly the way the experts predicted it would be. But here in the United States, we’ve got our own issues because while most European countries are doing their best to try to reign things in doing their best to take care of their citizens, giving them stimulus each month, without having to worry about the partisan bickering, the United States, isn’t doing that.

And we also have somebody sitting at the very top of the political food chain, Donald Trump, who routinely tells us that all of this is just overblown and all of this is going to blow over any, any minute now, any minute now, but according to six, six recently released white house coronavirus task force briefings. The president himself has known about the dangers for months. He’s known about the resurgence for months, uh, this from Huffington post representative, Jim Cliburn chair of the house, select subcommittee on the coronavirus crisis released six weekly white house coronavirus taskforce reports showing that the white house has known since just after labor day, that COVID-19 cases are skyrocketing and that there is a serious need for more testing and mask mandates. But the white house chose to hide these reports. According to Cliburn, as Trump publicly claimed in September, the coronavirus quote affects virtually nobody and hosted potential super spreader events and States.

The taskforce warrant had spikes in cases, including Wisconsin, Minnesota, and North Carolina, and as has been reported. Uh, health officials have traced outbreaks back to some of these Trump events, specifically the ones in Minnesota. They know for a fact it was a super spreader event cause they can track the cell phone data and see where people went and then see where the spikes happen. They got it there and they took it back to their community and Trump knew this would happen. And here’s the thing. Folks, not only did he hide the truth from us, we’ll get to that in a second. But he himself knew it and chose to put people in danger. Every rally he has gone to every one he’s done. I think he’s doing one a day at this point. Maybe even more than that, every one he does. He knows that he is putting these people in danger.

He knows they will get sick. He knows that some of them will not be alive two to three weeks from now. He knows that and he doesn’t care because he thinks it’s going to benefit him politically. You just better hope that the people who do kick off because they decided to go to one of your rallies. You better hope they either voted early or that they don’t kick off before November 3rd. Otherwise you just lost one. And that’s a very sad and grizzly statement to make isn’t it. But that’s the truth. And that’s what the president is hoping for now as for the, he lied to the entire public thing. Yeah, that’s what this man does. And this is not one of those ridiculous, stupid lies, you know, lies that all politicians tell about, Oh my God, look at the great jobs numbers I have because Americans don’t actually go through the job report and see that they’re all crappy, horrible, low wage, no benefit jobs, part time jobs, all they see is the total number of, you know, a million jobs created the last week. Oh, Hey, that’s great. That’s awesome. Yeah. They’re crap jobs, but presidents can spend those to benefit them. You can’t spin a pandemic. You can’t spin your way out of these lies. People died thousands upon thousands upon thousands of people died because the president is too cowardly to do anything he’s too weak to make a decision. And the rest of us, hopefully not for much longer have to deal with the fact that we have a president who’s too stupid and weak to do the right thing.