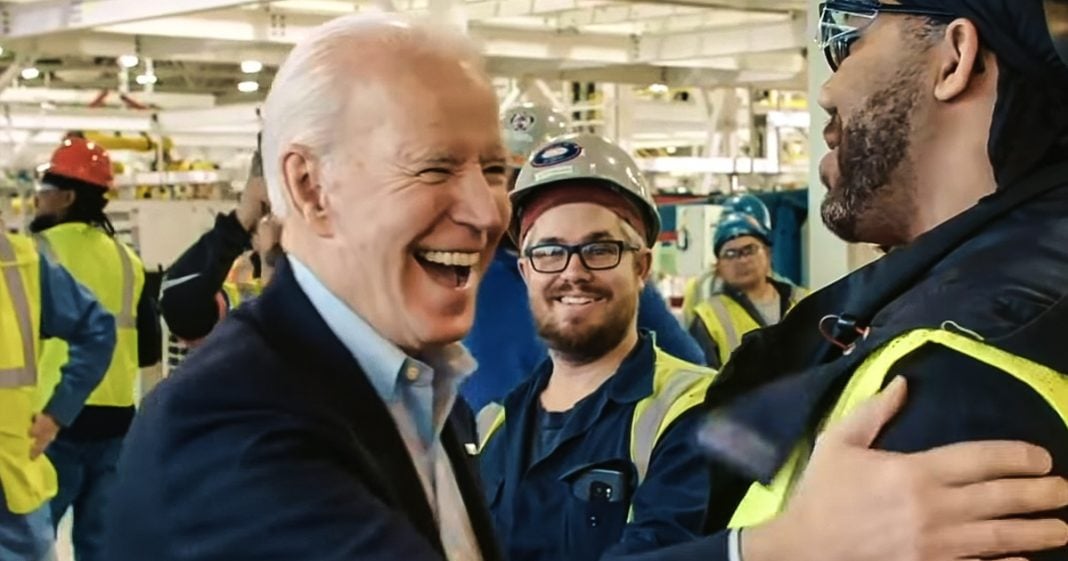 Joe Biden and the Democratic Party are doing everything they can to anger progressives before the election, and it doesn’t look like this is a very smart strategy. A new Politico report says that the Biden campaign is currently vetting numerous different Republicans, including John Kasich, to be a part of his cabinet, should he win in a few weeks. This is not smart, as these Republican snakes will strike as soon as the opportunity presents itself. Ring of Fire’s Farron Cousins discusses this.

Yesterday a Politico article came out that left Progressive’s and even some regular old Democrats kind of scratching their heads a little bit. And the article was titled Biden eyes, GOP candidates for cabinet slots. And it goes on to explain how his, uh, transition team, you know, vetting people like Meg, Whitman, John Kasich, Jeff flake, Charlie Baker, Charlie den, all of these, you know, never Trump Republicans, some of whom actually, as you know, we talked about at the time, get speaking slots at the DNC, um, folks, I feel like I shouldn’t have to say this again, but apparently I have to say this again because I have to, these people are not our friends. You know, everybody needs to reread the little short fable about the scorpion and the frog, right? The scorpion needs to get across the river. Scorpion, obviously can’t swim. None of the other animals will take him.

And finally the frog says, okay, I’ll take you, but you gotta promise not to sting me. So they get halfway across and the scorpion stings the frog and the scorpion or the frog goes Wyatt, why’d you do that? Now we’re both going to die. And the scorpion replies, cause that’s what I do. That’s what these Republicans are. They are the scorpions and the Democrats are dumb enough to be the frog that says, okay, but you better not sting me. We know how this story ends folks. And we’re not guessing how the story ends because we saw how it played out during the Obama years when Obama did the same thing. I don’t know if you’ve heard of a guy named James Comey who Obama put in power. Yeah, Republican. He thought, Hey, I’m going to reach across the aisle. Bring in this nice Republican guy, surely this isn’t going to have massive implications.

That’s going to forever alter the history of the United States. Surely, surely not going to happen. Right. It did a hundred percent net and here’s Joe Biden making the same exact mistakes that his boss made before him. John Casey, who was the number one name on the list? Dudes, not our friend who signed one of the most restrictive abortion laws in the country loved busting up public sector unions engaged in massive voter suppression in the state of Ohio, effectively keeping Ohio from turning blue. Is that really who we want on our side? Because if it is you better let us know now because that’s not a side. Any of us want to be on. And here’s the kicker.

Joe Biden was just at this point, starting to receive more progressive support. Now, not outright, you know who Ross support telling people to go vote for him. But a lot of Progressive’s including a lot of people in this industry. A lot of my friends in this industry finally got to the point that I’m also at and said, you know what? Dammit, I can’t do the third party protest vote. This is too important. I’m voting for Biden. I’m not happy about it. It sucks, but I’m going to do it because I understand it’s for the greater good. I had seen a lot of people come out recently and say things like this, Mike Figaredo of the humanist report, uh, put out a beautifully written a series of tweets explaining this exact thought process. And it’s the same one that I have. It’s the same one. That’s so many others on the left have been Dixon, Jeff Waldorf.

You know, we’re, we’re all kind of on the same page. None of us like the guy, none of us think that we’re going to have any kind of huge progress under him, but it sure as hell, better than the alternative. And then here Biden turns around and says, Hey, thanks for your support. New progressive friends. I’m gonna dig the knife in a little bit deeper on ya and appoint a bunch of Republicans while continuing to ignore progressives and progressive values that are actually supported by a majority of people in this country. That’s what we’re dealing with. If they keep this up, they may not have as much progressive support as they think. And in the end, they’re going to be a bunch of frogs left with that deadly scorpion on their head, drowning in the river.