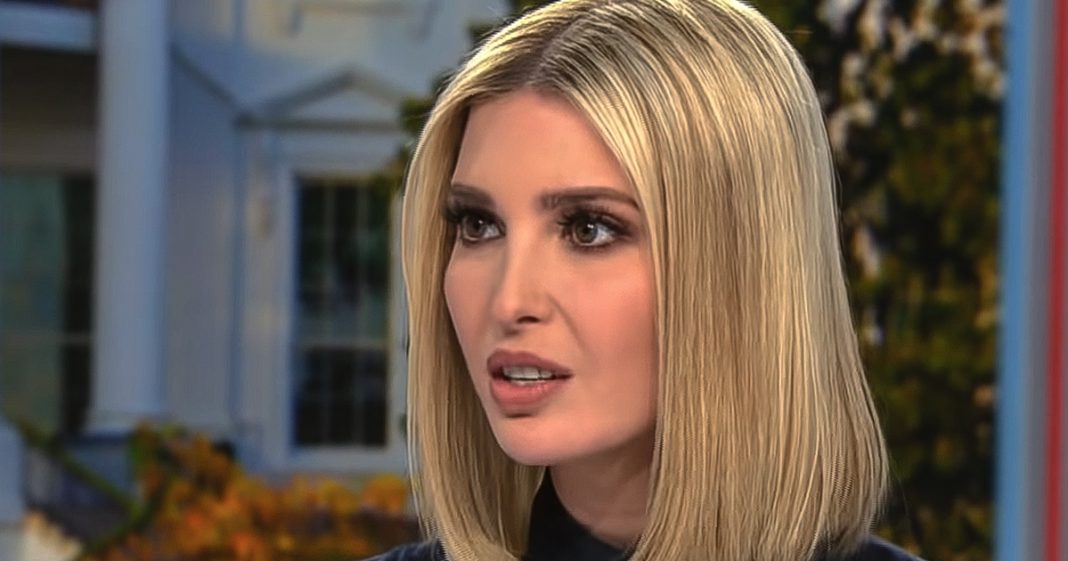 During a campaign stop in Michigan earlier this week, Ivanka Trump told an audience of about 100 people that we can’t just be expected to live with perpetual shutdowns, so we should all just learn to live with the virus. If we all had the ability to get the same kind of taxpayer-funded healthcare that her father received, that might be an option, but until then, we’ll have to do our best to quarantine and socially distance from one another. Ring of Fire’s Farron Cousins discusses this.

On Monday, Ivanka Trump traveled to Michigan with Mercedes schlepped to do a quick little campaign rally in front of about a hundred people maybe. But during this little event that also received very little press Ivanka told the crowd, we’re just going to have to learn to live with the virus. You know, we can’t go back into these perpetual government shutdowns. She said, and we’re going to have to figure out a way to learn with, learn, to live with the virus. Now that’s an interesting, uh, you know, way to put it, to say the least, right. I would think the smarter, more responsible thing to do would say would be to say, excuse me, um, you’re going to have to learn to live with just wearing a mask when you go out.

Right? That, that it seems a little more on the nose, right? Instead of telling people, Oh, well, we’re just, I mean, it is what it is. We can’t keep shutting down the economy because the government’s not going to help you at all. No. So, Oh, well, suck it up, buttercup. Here’s the problem that Ivanka has aside, you know, forget for a moment that she doesn’t even live in reality and never has for her entire life. She’s lived in her top little, you know, 0.01% bubble, her billionaire bubble. She’s never had to leave the billionaire bubble, not everybody in this country. In fact, nobody else in this country is ever going to get the same kind of care that Donald Trump received when he was admitted for COVID-19. Nobody else in this country gets that same quality of care. Nobody else is going to get a suite in a hospital and have a team of doctors working on them around the clock, feeding them all sorts of experimental medications, not gonna happen.

So you can go ahead and throw that part out of the window right now. Second, the perpetual shutdowns wouldn’t be that hard on the economy. If we had a central federal government actually taking care of people. I know Europe right now is in the middle of their second wave. And their second wave is massive, worse than the first but European countries. Most of them, not all of them, but most of them did things that United States is not willing to do. First and foremost, mask mandates, second mandatory quarantines, third stimulus payments every month, essentially UBI, or you have some countries giving the equivalent of us $2,000 per month to everybody just to make sure you can still pay for goods and services. And if you happen to temporarily lose your job during the pandemic, you have enough to get you by three, four, five, whatever it takes to make sure that once this is all over your still around, you haven’t become destitute.

And you can go back to your job. And the economy picks up right where it left off. That’s the thing. These morons don’t seem to understand. We can stop the bleeding at the moment if the government pays people. And if you think that that is impossible, look at the over bloated military budget. We have look at the, uh, what is it? $7 billion. We give the oil industry alone each year in subsidies, look at the tax cuts. We’re giving wealthy people. Any one of those items could be paying for these stimulus checks. And we get the checks. We keep moving about our lives. And then when all this is over the people who had lost their jobs immediately go back. Everything restarts right there without missing a beat. And we’re back in action folks,

But I’m afraid our elected officials do not have that kind of foresight. They can’t think three or four months ahead. They can only think three or four hours ahead. How is this going to benefit me in the next half a day? And if it doesn’t, they don’t do it in Ivanka. Who’s not even an elected official is even worse than them. We’re just going to have to figure out a way to learn to live with the virus. That’s not true. We could figure out a way to get rid of it, to stop it in its tracks. But in order to do that, we have to have a competent federal government, which is something we haven’t seen in quite a few years.