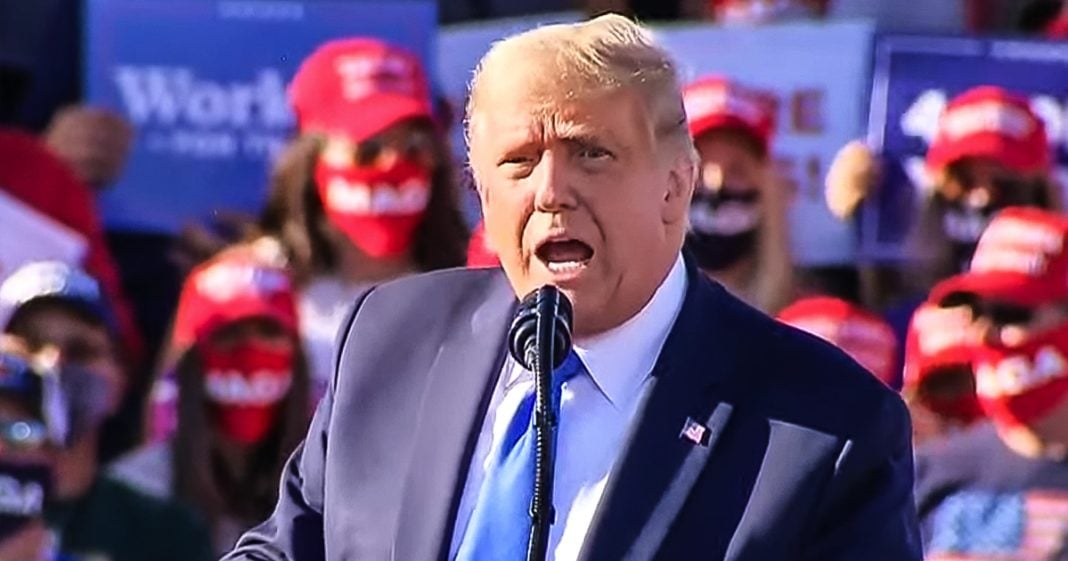 During a rally on Sunday, Donald Trump openly mocked Joe Biden for saying that he would listen to scientists when making decisions about the pandemic. This is the exact opposite of what Trump has done, and instead the current President has forced science to change to fit his agenda, and that has resulted in the deaths of more than 200,000 Americans with 48 out of 50 states reporting resurgences in COVID numbers. Ring of Fire’s Farron Cousins explains what’s happening.

On Sunday during a speech to a mostly masculine crowd in Nevada, Donald Trump, we mocked Joe Biden for saying that Joe would listen to the scientists. Trump said, uh, imagine if I listened totally to the silent scientists, we would right now have a country that would be in a massive depression. We’re like a rocket ship. Take a look at the numbers. Mmm. Rocket ships. Probably not a good analogy for that because what goes up must come down and that’s, that’s still what the economy’s doing. Tens of millions of jobs are still gone. Donald, I know you like to talk about the fact that, Hey, we’re adding jobs every week. And yet as the economy reopens, that that’s exactly what we had expected to happen. Unfortunately, the rate of job growth is not matching the rate of job loss, which means we are still at a very big net negative.

And unfortunately, given the fact that we are facing a massive eviction crisis here in the United States, we have already had wage stagnation. That’s been going on for decades. People in the middle class, people in the working class do not have money to spend. Therefore there can be no recovery because there’s not a flow of money. The rich are hoarding all their wealth. They’re not going to be out there spending it. So I don’t know what you’re talking about. That the numbers look like a rocket ship, unless you’re talking about a rocket ship plummeting in the ocean while also bursting into flames. Yeah. It looks like that. But that’s beside the point. The point is he mocked Joe Biden for saying, I’ll listen to the scientists. That’s smart. And that’s what we need. But Trump can’t ever do that. And his base actually agrees with him that it’s stupid for Joe Biden to say something like that.

And we know why psychologists have looked into what Trump’s supporters need, what they feel that kind of personality trait. These are studies that have gone on for decades folks. And they understand this kind of personality. In particular. These are people who crave authoritarian rule. They want to be told everything. And they want a leader who exudes confidence and decisiveness. So if Trump said, I’m going to take advice from other people, suddenly it shatters their worldview. He is not that exalted leader that they thought he was and that they crave. So they would begin to look elsewhere. They would lose faith in him. Believe it or not. Those people actually want someone who stands up and says, I’m not going to listen to people smarter than me because there are no people smarter than me, Joe Biden on the other hand understands, Hey, I’m not the brightest guy in every room.

These people know more about than I do. They’ve spent their lives studying these things. I have not. They know more. Let’s listen to them, except here’s the problem with Joe Biden is that it ends at the pandemic response because Joe Biden, who has repeatedly told us over the last few weeks for the love of God, he’ll never ban fracking. Uh, scientists have actually said we should ban fracking. So he’ll listen to the scientists on the pandemic, but he’s not going to listen to the scientists on. The other thing is see folks, that’s the problem because it doesn’t matter what the issue is. Scientists for the most part, of course, there’s some bad apples out there. Sure. But these are people who spend their lives in a field of study and they are constantly learning and evolving and figuring things out when they talk. We should listen.

Whether it’s about the pandemic, whether it’s about climate change, whether it’s about women’s reproductive health, whether it’s social scientists and political scientists, warning us about the dangers of any quality and how that sickens an entire society, we should listen to all scientists, but Republicans can’t do it because it shatters every single one of their political beliefs and Democrats can’t do it because it shatters most of their political beliefs. If we were listening to scientists again from medical scientists to climate scientists, to social scientists, if we did that, if we actually let facts in science rule, our country, we would be unstoppable, was a global force. We would absolutely have the best, you know, the longest life expectancy. We would have the happiest population and we would have the most productive society imaginable, but we don’t want to listen to the scientists about the things that challenge our worldviews. So the best I guess we settle for is he’ll listen to the scientists about the pandemic. And then beyond that, it will be no different than what we have now. Right? Well, it sucks, but technically it’s still better than what we have now.