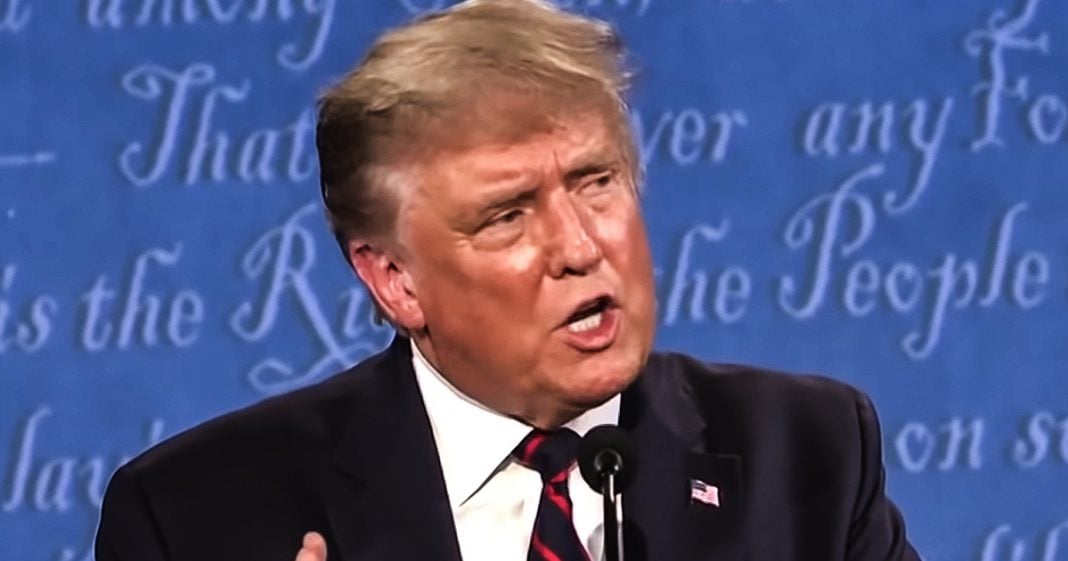 Donald Trump is being heavily coached headed into the final Presidential debate, and his advisers have all told him that the big key for him is to come off as NICE. They understand how bad his poll numbers are, including his likeability, and they want to turn these around in the final weeks. But instead of listening to them, Trump spent the weekend attacking the upcoming debate’s moderator, so there goes that plan. Ring of Fire’s Farron Cousins explains what’s happening.

The final presidential debate is set to take place on Thursday. And Donald Trump is obviously being heavily coached, heading into this last big push before the general election takes place on November 3rd. Uh, he did not obviously do well in the first debate. Uh, really neither candidate did, but Biden it’s pretty much agreed, did better than Trump. And then of course, the second debate Trump backed out of, then he insisted on having a town hall opposite, Joe Biden’s and then that kind of tanked forum. So before the last debate, he is being heavily coached by his campaign advisors. And the number one thing they’ve told him is you’ve gotta be nice. You actually have to come across as likable. And the reason they’re saying that is because one they can read, they know that his poll numbers have been horrible pretty much since the day he won the election.

Nobody likes him. Most people in this country, including people who voted for him still don’t like him. He’s a very unlikable human being. But right now that unlikability, uh, is translating into fewer votes, you know, 2016, most people said, yeah, I don’t like the guy, but I’m going to vote for him. Anyway. You’re not getting as many of those this year and they need to fix that. And they only have a week and a half at this point to do it after the debate. So they’re telling him be nice. You know, last debate you interrupted Joe Biden’s 71 times. Maybe, maybe don’t do that this time. Maybe don’t personally insult him. Maybe don’t insult his son. Certainly please don’t insult the dead son. And so Donald Trump has responded to all of this advice about being nice by spending the weekend, attacking the debate. Moderator, Kristen Welker, NBC news, white house correspondent and Donald Trump this weekend after his idiot son, Don jr. Tweeted out an attack on Kristen Welker, the upcoming debate, moderator, Donald Trump, the president, retweeted it and added the comment. She’s always been terrible and unfair, just like most of the fake news reporters, but I’ll still play the game.

Everybody’s telling you, Hey, all you gotta do is be nice. Like don’t be a jackass and you might actually win this debate. And before the debate even takes place, he’s re tweeting his idiotic son, attacking the moderator, like attacking the person who, by the way, according to reports yesterday, she’s going to have the ability to cut your mic. And you’ve like pre pissed her off now. So I’m not sure what your strategy is, but pissing off the person that can make it to where nobody in the country hears you during your final pitch to them. Yeah, that’s a really stupid move, but let’s face it. The chances of Donald Trump actually going to this debate or getting slimmer by the day yesterday, his campaign put out an announcement saying, Hey, Whoa, you’re saying we’re going to be talking about things like the pandemic and the economy.

We, Whoa, Whoa, Whoa. We, we thought this was going to be a foreign policy debate. So it has to be about foreign policy. We demand that you focus on foreign policy because that’s what we agreed to. Even though it’s not actually what you agreed to. So they’re already laying the groundwork for him to back out of this. And especially since the, uh, they can mute you saying was confirmed after they sent the letter. Uh, that’s another reason why Donald Trump may be backing out of this one. And if he does any image, any media outlet that actually gives him a platform to just go up there and do what he did last week after backing out of the second debate. Any media that does that this week needs to be shunned permanently and forever. I don’t care who it is. If the man is too cowardly to debate Joe Biden. Cause he doesn’t want to have to talk about issues where he’s floundering, then I’m sorry. You don’t deserve any airtime at all.