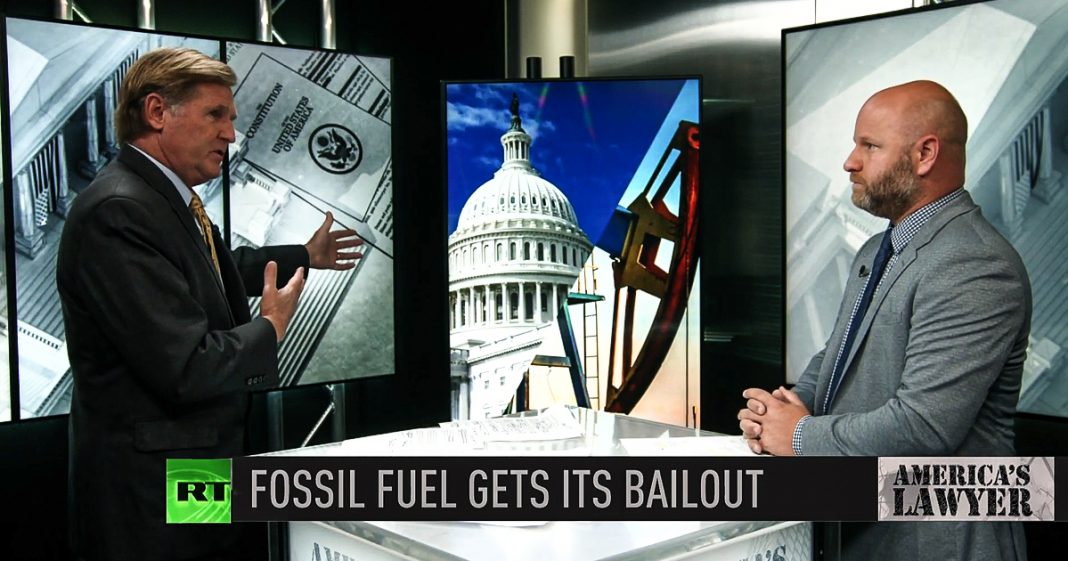 Via America’s Lawyer: A whistleblower reveals migrant women at a detention center in Georgia have been subject to forced hysterectomies and other sterilization procedures by a doctor dubbed the “uterus collector.” Also, Despite remaining in a congressional stalemate over additional stimulus relief, the government bails out fossil fuel companies to the tune of $100 billion. Mike Papantonio & Farron Cousins discuss more.

Mike Papantonio:             The Senate is still refusing to take up any new stimulus legislation as millions of Americans struggle to pay their bills, yet, there seems to be enough funds to bail out fossil fuel companies to the tune of a hundred billion dollars. I got to tell you, when I started seeing this story develop, it was just like, it’s almost takes your breath away. Here’s an industry that’s on the decline right. They’re, they’re in big trouble financially because of the natural market. Nobody put them there. The natural market put them there because of bad decisions they made not to move into alternative energy and try to prop up the, the, the, the slagging fossil fuel problem. So now the government comes in just like they did with all those thuggish bankers. You know, when the, when, when, when they lost all that money because of pure criminal conduct and greed, this is another story, isn’t it? Same story, isn’t it?

Farron Cousins:                  It is. And the more disgusting part about it now, too, is not just that they’re doing it for the fossil fuel industry that, that failed by its own, you know, decision, but they’re doing it at a time when 61% of American families right now are reporting that they can’t make ends meet. They can’t pay all their bills. We have an eviction crisis that is looming, where tens of millions of people could be kicked out of their homes, because they haven’t been able to pay their rent for the last few months during the pandemic. And we have multiple different bailout bills sitting on Mitch McConnell’s desk, because Nancy Pelosi to her credit and Steve Mnuchin to his credit, they’ve been working together. And they both think we have to bail out the American people. And so you’ve got Trump saying, make it happen, Pelosi saying, make it happen, Mnuchin saying, make it happen. Mitch McConnell says, I’m done. He said, I’m done. I will not pass another piece of stimulus, but.

Mike Papantonio:             Both parties built this and both parties when they built it knew that so much of the money was going to go back to wall street, you know, can you imagine wall street making claims for something like this. It was going to go to the arms industry, which also collected money. It was going to go to the fossil fuel industry. But the, the thing that’s so incredible about this is we all know the fossil fuel industry is getting ready to fall off the cliff. So with a hundred billion dollars, all we’re doing is delaying that fall. We’re just making it a longer process, aren’t we?

Farron Cousins:                  Yeah. And they actually, the fossil fuel industry, came out a couple of weeks ago, and this was a big under reported story again, they announced definitively we’ve hit peak oil in the United States. We will never be able to pull out as much oil as we did today. So every day after that, you’re getting less and less. So they know they don’t have a lifeline. And any one of them, Exxon right now, could have been, if they had it, the leader in windmills.

Mike Papantonio:             No question, so far ahead., There’s another part of it that everybody misses this story. We have these thousands of rigs, oil rigs, that are leaking methane. You understand they’re, they’ve been abandoned. The company got everything they could, they left, and now they want taxpayers to clean that up. So now that’s going to be much more than a hundred billion dollars that we’ve given them for no good reason. We, you know, no strings attached. We didn’t say here’s a hundred billion, you need to start, you need to start closing down some of these rigs that are, they’re leaking methane. I mean, just tons of methane into the environment. And we said, ah, nope, no problem. You’re the, you know, you’re big, you’re big corporate donors.

Farron Cousins:                  Well, and the other side of this too, is not only did they get, you know, the, the millions and millions or billions, excuse me, in this direct bailout, they also received, I think, 32 million in those PPP loans that were supposed to go to small businesses. 32 million went to fossil fuel companies who had also paid $52 million in fines. So they got to basically recoup the cost of their environmental fines by taking money that was meant for mom and pop businesses.

Mike Papantonio:             Taxpayers end up paying them because they write it off.