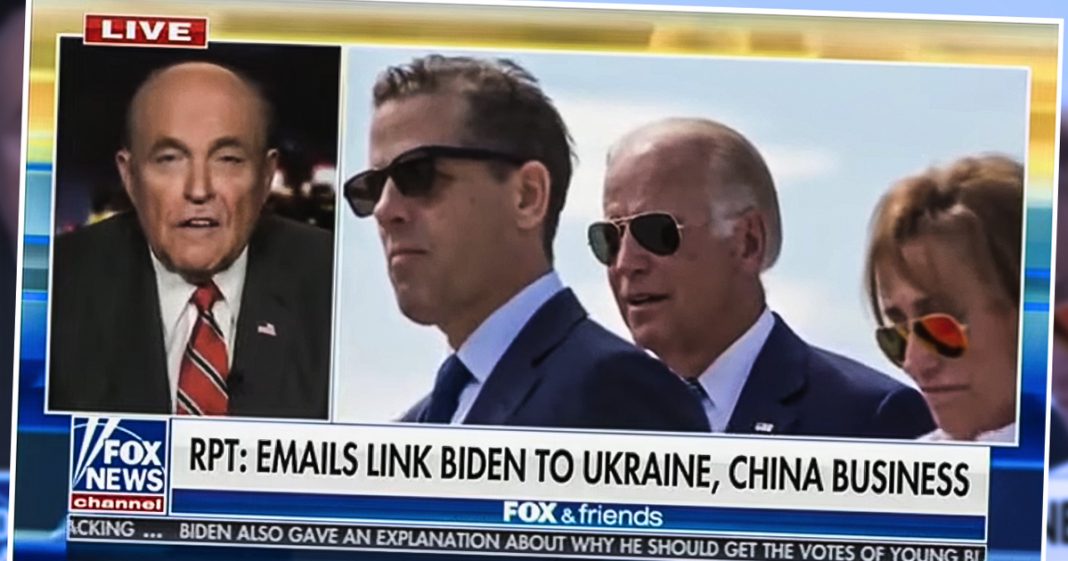 According to new reports, Fox News was originally offered the Hunter Biden laptop story, but the network passed on the opportunity because the story simply wasn’t credible. This comes after reports of New York Post reporters NOT wanting to put their names on the story for the same reason. And now the FBI has announced that they are investigating the matter – but not what Hunter did, they are investigating the origins of the story. This was the biggest backfire imaginable for Trump and Republicans, as Ring of Fire’s Farron Cousins explains.

The Hunter Biden laptop story is still effectively going absolutely nowhere. Well, I guess technically that’s not true because it is going for an FBI investigation, uh, that apparently has been going on for quite some time now, but here’s the thing we’re learning more and more every passing day about how many people didn’t want to touch the Hunter Biden story, because nothing in the story can actually be authenticated. Here’s the latest that’s developed yesterday. We learned that Fox news news, Fox news, The president’s second favorite media outlet passed on the story because they didn’t think it was credible, especially not coming from Rudy Giuliani. And that kind of opened up a second can of worms that I guess for a while had been secret at Fox news, it turns out that Fox news had been warning and what they call their brain room had been warning the on air talent for a very long time, months, and months and months to avoid Rudy Giuliani because he’s not credible. And they thought he could have been compromised by foreign powers. So Rudy Giuliani, who has always been the darling of Fox news has always gone on there to defend Donald Trump.

They were told, Hey, could you not book him? Because we’re pretty sure that one senility is starting to set in, but two he’s been spending a lot of times with, well, let’s face it enemies of the United States. So yeah, he’s really not the kind of person we want on the network. And that actually makes a whole lot of sense. When you consider the fact flashback to last Friday, when you had Fox and friends, bring Rudy Giuliani on Giuliani, got to talk about the Hunter Biden story and all the Fox news, Fox and friends host right there, including Steve Doocy were all like, yeah. I mean, you know, the story still has to be vetted. So we can’t say one way or the other really. I really actually playing it down the middle, like, okay. I mean, that’s what you say, but none of this has been confirmed and Giuliani interrupted you there. No, no, no, no. There’s more, there’s more of this and it’s all confirmed and they’re just like, alright, okay, man. That’s cool. Well see.

Yeah. So yes, this new story does kind of corroborate what we’ve already seen play out on the air at Fox news. And as I mentioned, this is actually just the latest in a long line of people who didn’t want to touch the story. Cause we found out two days ago, the reporters at the New York post didn’t want their names on the story. In fact, the lead reporter on it said, yeah, don’t put my info on it. I don’t want people to know that I put this piece of crap together because they weren’t willing to stand behind their work. And if you’re not willing to stand behind your work, then it’s not good enough to be published, but they did. And of course, as I mentioned now, the FBI is investigating. They think this is possibly part of a, uh, you know, Russian counter-intelligence operative, uh, to, you know, disrupt the 20, 20 election.

If it was, they did a really poor job of it because nobody believes the story. Except of course, for the, you know, crazy, right. That would have believed it. If we said Hunter Biden is a space alien that that survives crack. They, they believe that. So of course they would believe that, Oh, this laptop just happen to fall all into the hands of this loyal Patriot who turned it over to Rudy Giuliani because that’s, that’s a common thing to do, you know, Oh my God, compromising material on a laptop that I’m not supposed to be looking at Rudy, we’re not going to believe this. Nobody believes is it no rational thinking person believes this, including plenty of rational people on the right. They don’t want this story out there anymore. So what Fox news has done instead, since they don’t want to touch the, you know, authenticity of the story is last night, they had great Glenn Greenwald, uh, come on Tucker Carlson show to talk about, Oh, the libs are Jews hate.

It’s all Russia, Russia, Russia. Cause that’s all they ever do. They’re trying to misdirect you. Look, I, I, I said plenty of times, I don’t see Russia as the bad guy in every single thing wrong with the country, but in a situation like this, where it’s pretty easy to pinpoint where it came from, because you do have forensics with the computer and the files and the hacking and all that stuff. Yeah. That’s not a conspiracy theory. That’s not somebody trying to start a new cold war. That’s just saying, yeah, it happened. And yeah, for all the people who say, well, the U S does it too. Yeah, we do. And that doesn’t excuse what Russia may or may not have done. And it doesn’t give a pass to what the U S may or may not do us engaging in bad behavior. Doesn’t excuse other people engaging in bad behavior and vice versa.

That’s not how that works. And that’s a very juvenile argument. It’s also juvenile to outright dismiss everything from Russia, because you don’t want to be part of Russia gate. I don’t consider myself a Russia Gator by any stretch of the imagination that Russia metal in 2016. Hell yeah, they did. Did it actually have a significant impact? Is that why Hillary Clinton lost? Nope, absolutely not. It was Russia involved in this one. It looks like they were, was it a good op that they did? No, it wasn’t. It was lazy and irresponsible and easily refused. So there you go. That should be the end of it. Fox news is keeping it alive by trying to talk about the coverup. Instead of talking about the fact that the entire story so far has proven to be bogus.