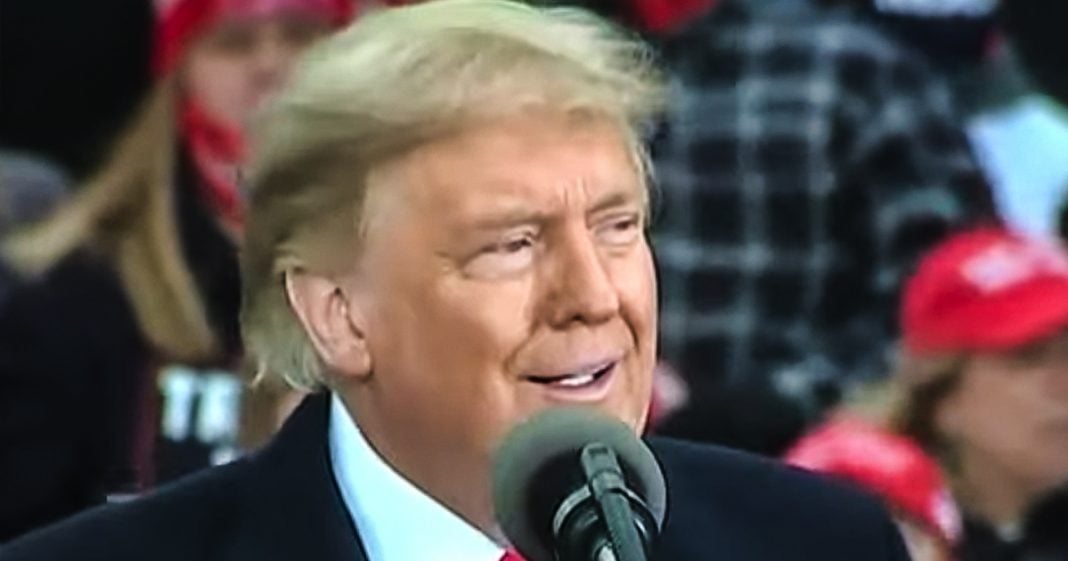 During one of his hate-fueled rallies this weekend, Donald Trump began to chuckle and laugh as his audience began chanting “Lock her up”. They were referring to Michigan governor Gretchen Whitmer, even though it was revealed last week that she was the victim of a kidnapping plot by right wing militias. Ring of Fire’s Farron Cousins explains what’s happening.

On Saturday, Donald Trump traveled to Michigan to have another one of his hate fueled rallies, where most of the attendees there were not wearing masks and he was in Michigan. So he brought up democratic, Michigan, governor Gretchen Whitmer. And as soon as he did the crowd erupted in their usual chant, just depends on which subject they’re directing an app, but they started chanting, lock her up democratic governor of Michigan, Gretchen Whitmer lock her up. They chanted. Now none of the morons in the crowd were really able to articulate why it is this woman should be locked up. But Trump didn’t say no, no, no, we’re not doing that. You know, after all, it was just a couple of days ago that the FBI announced they had uncovered a plot by right-wing terrorist to kidnap this woman. No, he didn’t say that he laughed. The president of the United States laughed.

He laughed at this. And then he said, lock them all up because that’s just the kind of fascist regime that we’re currently living under fascism isn’t on its way. It’s, it’s not taking shape it. It’s here and we’re living under it. And the president of the United States is the one facilitating this and his psychotic brain, dead supporters are cheering it on. They love it. They love it. This is what these mentally incompetent individuals have been craving. That is what mental health professionals have have told us in recent weeks that these people crave this authoritarianism that Trump has brought. If you disagree with us, you are the enemy and not just, Oh, I don’t like you, but you’re an enemy that deserves to be locked away, removed from society. Because in this society that Trump has created, there is no room for dissent. There is no place for it.

And therefore you must be removed. That’s where this chance is coming from. That is where that plot came from. I don’t care if you agree with Gretchen Witmer’s policies or politics that that’s irrelevant here. The fact of the matter is that she didn’t do anything illegal. She hasn’t done anything. That’s violating the constitutional rights of anybody. And these people are pissed off because she said we have to wear masks, or we have to, you know, not go out to eat for a while. And it sucks for the people that work in those industries. It truly does. But if the federal government was actually taking care of people, the way they should be the way other countries are, uh, it wouldn’t suck so bad for them. They’d still be able to pay rent or hell. Maybe they wouldn’t even have to pay rent during this and not be afraid of being evicted.

They could afford their basic necessities. They could still afford to keep living and not have to go to work in a restaurant and serve people food while putting themselves at risk. Because God dang it. I need to go to out back, but that’s what these idiots want. That’s what the idiots at the Trump rally want. And I am not going to be nice to them. And I am not going to not call them names for it because they deserve it. These people are nuts. These people would love to see the destruction of the United States. They claim to love the constitution. They love to pretend to wrap themselves in it just like Donald Trump has literally wrapped himself around the flag and you know, pretty much done to it. What he’s done to dozens of women who are now suing him for doing that two of them,

But none of them, Not one of them, not Trump nor his supporters actually understand what this country is, what it’s about and what it’s supposed to do, what they want. Again, according to mental health professionals is to be subjugated. They want somebody to tell them how to think, how to feel and what to do, and anybody who doesn’t fit into that mold of what the authoritarian is telling the subjects to do and feel anybody else has to be locked away. And that is what this crowd made explicitly clear during Trump’s rally on Saturday in Michigan.