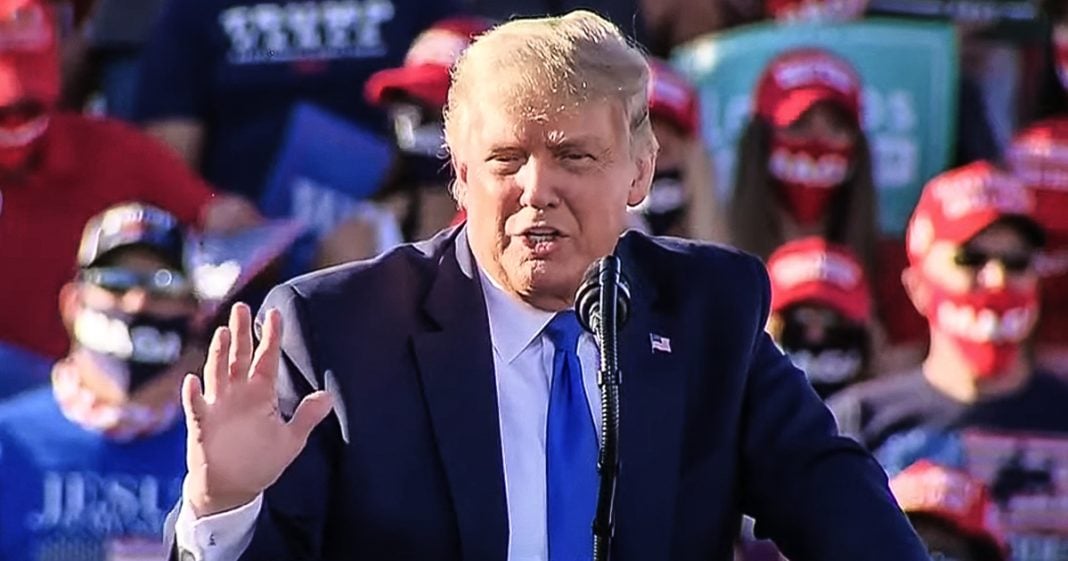 Donald Trump is abusing his power as President yet again in order to save his increasingly desperate campaign. The aid being sent out by the government is covered in Trump branding, and they are being accompanied by multi-million dollar advertising campaigns to let the country know how generous the President is – and all of this is being paid for with our tax dollars. Ring of Fire’s Farron Cousins explains what’s happening.

With just, you know, two weeks and a day to go until the presidential election of 2020 and all the polls at this very moment showing I don’t want to say utter annihilation for Donald Trump, but there’s certainly worse for him in 2020 than they were in 2016. Even though he pulled off the electoral victory in 2016, the way the polls are now with the swing States and electoral votes, uh, if it were held today and those poll numbers stood, he’s not going to win. So what does a guy like that do, right? Your campaign is hemorrhaging money, like so bad financially. You’ve had to pull ads out of most of the swing States that you are now losing and probably can’t win the white house back without winning those States. And you can’t even advertise there. Well, when you don’t have money to advertise, when you don’t have money to do good things or talk about things for the voters, what do you do?

You tap the federal treasury cause you’re the president. And apparently all of that. Money’s just yours to do whatever the hell you want with anyway, right? Or at least that’s what Donald Trump thinks it is because that’s how it worked. When he was in private industry. You know, it wasn’t a publicly traded company. It’s a family owned company. It was a private company, so sure he’s allowed to do whatever he wants with that money. As long as he’s what he’s doing is legal, but it’s not illegal for him to just take the money and spend it on what he wants to. But when you’re the president that money you’re tapping into in the federal reserve, that’s not your personal fund money. That’s not your campaign money. Those are our tax dollars. Every time you look at your paycheck and all that money came out, your federal income tax, the president’s now using that through a series of different bribery programs to put it mildly, um, to convince people to vote for him on November 3rd, here’s what’s happening.

There’s two separate programs right now. Uh, one we have talked about, and that is the $8 billion plan by the president to send, I think 40 million, uh, Medicare recipients, a $200 gift card plastered with Trump’s name on it. He had to make sure he has his name on it. They went through multiple different designs for it, with the Trump logo on it to make sure people knew that this $200 for senior citizens who currently hate Donald Trump, that the money came from him. The other one is a, a less known about program. The white house has in fact approved funding to send boxes of food, to needy families in the United States. It’s a good move, right? That is something that does need to happen. So yay, good job for doing that. Unfortunately, they also used our tax dollars, just like with the Medicare gift cards to plaster Trump’s name all over it, make sure it had the Trump branding, not even United States, branding Trump branding, the Trump logo, the Trump colors.

They made sure that all of these boxes, all of this, all of this stuff sent out to Americans had Trump’s name all over it. And that cost additional money. You know, what else costs additional money, the hundreds of millions of dollars. They’re now paying to publicize these efforts, the government agencies responsible for these programs are now spending a combined, I think $300 million to publicly promote the programs and also tout how great Donald Trump is for making it happen. To put it another way. He is using our tax dollars to run a publicity campaign for himself ahead of the election.

I’m pretty sure Republicans would be calling for the head of any Democrat who attempted to do this. But of course, since it’s their own guy, you know, there’s going to be a deafening silence from them. But of course, Trump sets the precedent next person to take the white house under a, as a Democrat, they may try to do the same thing. And at that point, we’re going to see Republicans absolutely lose their minds. We’ll cover it either way. It’s not okay for either party to do it. But the fact that Republicans are silent tells you everything that you need to know about their alleged cries of big government and government spending and deficits and all that, which by the way, all that deficit taught. That’s been absent for four years. If Trump loses, you can expect them to go ahead and start picking back that up, uh, pretty quick. Cause anytime a Democrats there, God, we can’t spend a dollar on anything, but when it’s a Republican hell, you can spend on anything you want, even if it’s potentially illegal spending to promote your failing campaign.