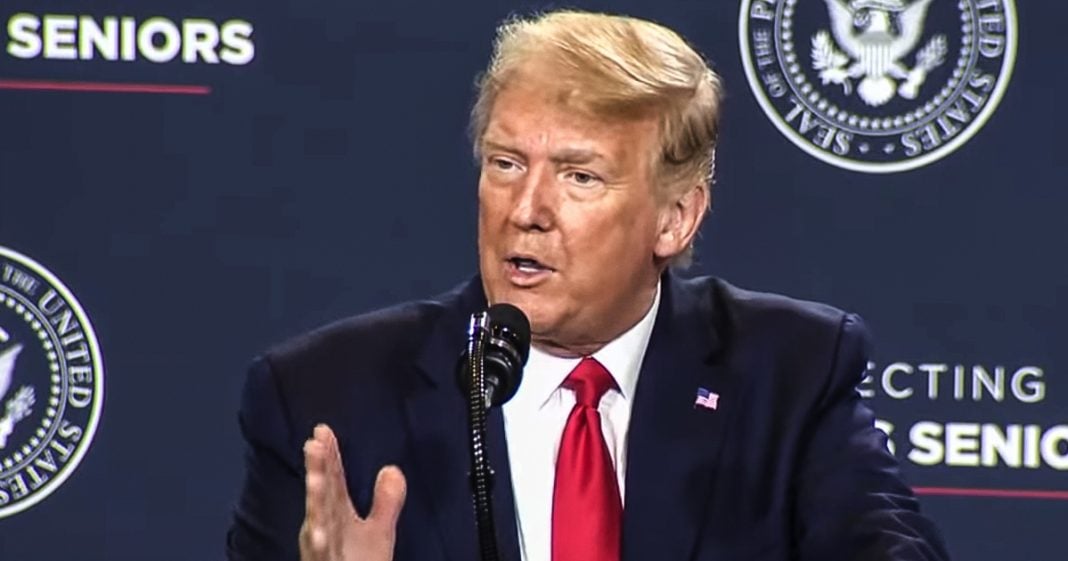 According to a shocking new report, the Trump administration inadvertently made states bid against one another – in a manner described as eBay-style – for personal protective equipment in the early days of the pandemic. This is the result of a federal government that had absolutely no response for the pandemic and refused to help states that were struggling to keep their citizens alive. If Trump loses in November, there has to be serious investigations into what these people did, as Ring of Fire’s Farron Cousins explains.

According to an explosive new documentary that actually focuses on the Trump administration’s handling of the coronavirus pandemic in the early days of the pandemic, because of the mishandling from this administration States across the country were forced to bid against one another. And what is being described as an eBay style bidding war for personal protective equipment PPE, that includes masks, ventilators gloves, all of the things that you remember back in March, April, may, even June, we were talking about the shortages of those would Trump used the defense production act to increase the production of ventilators. Uh, would he release the PPE that Jared Kushner’s shadow task force working with FEMA was confiscating from hospitals and quote, redirecting to other areas. And we later found out that they were taking it from blue States and shipping it to red States that didn’t even need it at the time.

But the blue States did now that’s kind of shifted and they’ve already used up most of it, nevertheless, because there was no actual federal response to the pandemic States were told, they were told your on your own, the federal government was not going to be pure procuring supplies for them. They were not going to be sending them supplies. You got to do it on your own. And so when a corporation, and this is, you know, another drawback of the American capitalistic system, when you have a company that says, all right, yo, I got 10,000 ventilators here, a for sale who wants him? Okay, well, you’re going to buy a holdup low. You just offered me million dollars more than what they did. Okay. Well, Hey, I got an extra million who got 2 million. Who’s got 2 million on these ventilators, 2 million on 10,000 at 2 million with man in the back, let them get three.

Let me get 3 million going here. That’s that’s what it, that’s what it became. According to this documentary. And according to the financial records and the sales records and the people who ran the corporations, folks, this is not speculation. This isn’t hyperbole. This is all documented. This is what the States were forced to do because our federal government was so incompetent and corrupt with their handling of this pandemic. And that is what everybody needs to carry with them to the polls this year, along with your mask and your hand sanitizer, you need to carry with you the reminder of what those things represent, not just your personal safety, but they represent the failure of our government here of the Trump administration. That is why we’re still masked up. That is why we’re still having a hard time finding hand sanitizer or Clorox wipes or Lysol wipes and sprays at the grocery stores.

I’m sure you can find them a lot of times, but most of the time you can’t, we’re still in this. It still hasn’t gotten better. Europe has experienced a horrifying second wave. Meanwhile, we haven’t even ended our first wave. So can we expect a second wave? Just as bad as what they’ve got because of, so let’s hope Trump, isn’t still in the white house because we have seen how bad his response has been so far. Imagine what’s going to happen. If we get hit with a second wave, if it’s proportional to the second wave in Europe, that’s twice as bad as the first wave here. That’s a terrifying thought, but it’s also a terrifying, possible reality.