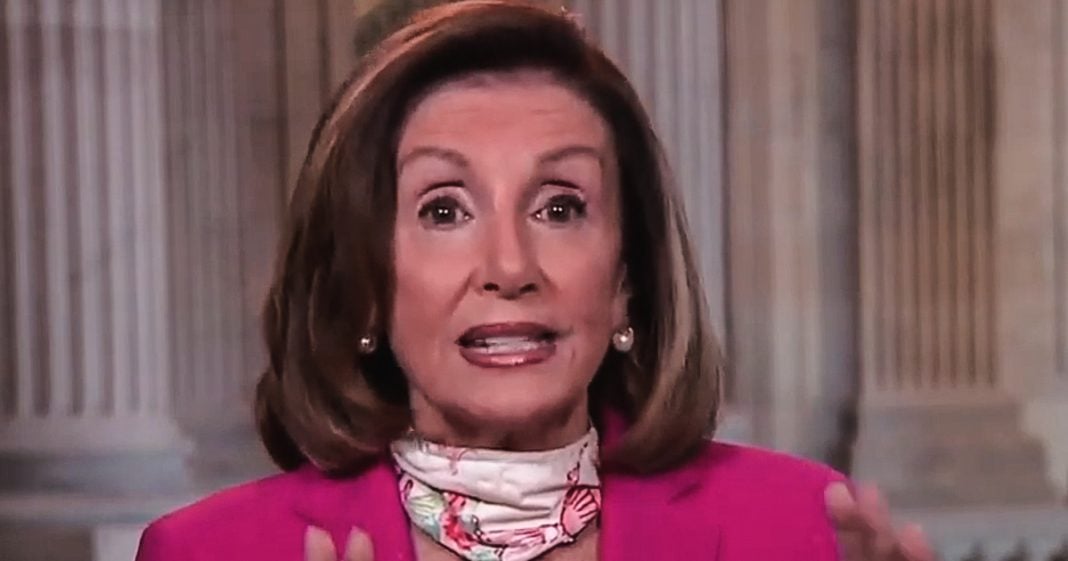 House Speaker Nancy Pelosi’s office announced on Saturday evening that she was giving Mnuchin and Trump 48 hours to reconcile their differences in the stimulus talks. This is a good, hard-line approach, but it happened when no one was paying attention, and AFTER she had already (very publicly) turned down their stimulus offer earlier in the week. To make things worse, Mitch McConnell has already said that ANY DEAL will be DOA in the Senate, so all of this is for show. Ring of Fire’s Farron Cousins explains what’s happening.

Over the past week. There’s been a lot of news about the ongoing stimulus talks between Nancy Pelosi and treasury secretary Steve Mnuchin. Now how speaker Pelosi made headlines last week, um, after she rejected the $1.8 trillion package that had been put together and proposed by Mnuchin and the white house. And she took a lot of heat for that. And to be honest, she rightfully should have deal was not perfect by any stretch of the imagination, but it did give an extra $400 a week in unemployment benefits. It did include another round of the stimulus checks to struggling Americans, um, included lots of pork as every single bill that comes out of DC does. And yeah, it’s crappy to give money to corporations at a time like this when they don’t even need it, but it’s even crappier to tell American workers we’re not going to help you.

So she took a lot of heat for that. On Saturday, she announced, or her office announced that they were giving the white house 48 hours to agree to the reconciliation efforts that they had put in place or that they had proposed, I guess, would be the better way to say that Pelosi had come back to them and said, look, here’s some things we want to hear some things we don’t want. Uh, here’s what you have proposed. Here’s what you can do to incorporate these things that we want into this bill. You do that. We add a deal. She gave him 48 hours as of Saturday evening. So by this evening, even though talks are still ongoing today, we’ll know what’s happening. At least have a clearer picture. Obviously Trump wants to get these checks out, wants to have his name on these checks. So that voters, before they go to the polls can remember all will Trump just gave me $1,200.

Of course I’m going to vote for him. Biden never gave me any money. He thinks people are that stupid. Um, because stupid people tend to think people are as stupid as they are. Um, hopefully not the case. I’m sure there’s going to be some people that are fooled by it. But nevertheless, in all of this, Pelosi’s taken, most of the heat she’s failed. Don’t get me wrong. She has failed. Uh, but the person who really deserves most of the heat right now is tunnel. Cause the house has passed stimulus bills that they worked on with the white house. And those have been sitting in, uh, Mitch McConnell’s office since may, may is when he officially walked away from all these talks. He said, I’m done. I’m done. I don’t know. So bill after bill, after bill sitting in their own Mitch McConnell’s desk last week as Nancy Pelosi was getting hammered by the press for redirect rejecting Trump’s offer. Do you know what Mitch McConnell came out and said, said, he said, if y’all Hass, he didn’t say y’all, if you guys, you, people, if you all pass this $1.8 trillion deal together, uh, I’m not going to bring it to a vote.

That’s what’s the point? Like, why are y’all this? You know, I’m not going to allow this to happen. And if it doesn’t pass the Senate, then it can’t become a reality. So Hey buddy, Good job, Nancy, for being the bad guy in all of this. And that’s actually the point of this entire, uh, topic here right now is because Nancy Pelosi, her rejection of this deal that she had actually worked on with the white house, her rejection of that, and the publicity negative publicity that followed that actually allowed her to lose the narrative, lose the narrative so bad that during her negative press McConnell was able to publicly say, I’m not going to vote on this thing. And nobody even noticed nobody cared. Pelosi was still the bad guy in all of this.

That’s how bad the democratic party is at messaging and framing. You are literally in a position where you knew McConnell, wasn’t going to let it be daylight. You knew you could make McConnell the biggest villain in the country today, but you were still either too timid or too weak or too distracted to understand that that was what was happening. Nancy Pelosi, God played Mitch McConnell did the playing and Mitch McConnell won because now he gets to keep his word of not bringing the bill to the floor for a vote. Meanwhile, she’s the one who still looks like the bad guy in all of the press. Now I’m not saying she is without fault. She is filled with fault here, but the fact that she didn’t understand she was being played that alone should tell us that she is no longer fit to be the speaker.