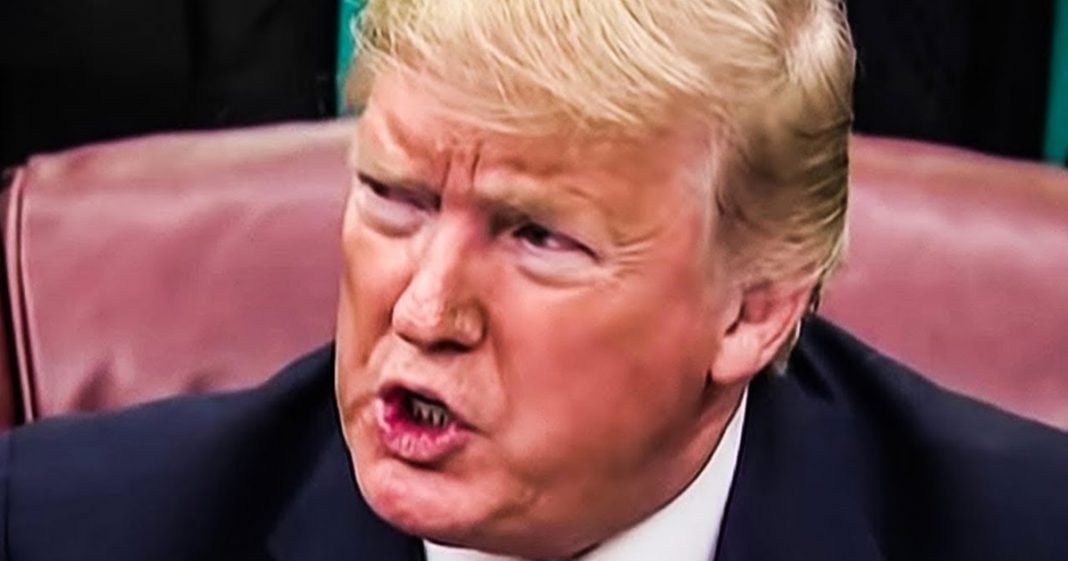 The election of Donald J. Trump as president of the United States should be viewed as a low point for America. In fact, for most of us, it should be viewed as one of the lowest points of our lifetimes. We have to make sure we don’t sink even lower, but in order to do that we have to reform the entire system from the top down. Ring of Fire’s Farron Cousins discusses this.

For a lot of people in the United States, the election of Donald Trump and the four years that have followed that has been a low point for this country, a low point in us politics, because again, my age, even people, you know, older than me, but definitely obviously people younger than me. We weren’t alive for Nixon and Watergate. We didn’t have to go through that. Uh, we weren’t around for, for segregation. So we didn’t have to witness that firsthand. So this the Trump administration and all the atrocities we have seen from this truly the lowest point, right? The kids in cages, you know, the force hysterectomy is over at that, uh, detention facility in Georgia. You know, the Muslim bans, the pandemic, the economic collapse, the trade war, all of this combined has been an absolute hellscape, but this country could go lower. It absolutely could go lower in based on what we’re already seeing in terms of who may run in 2024 on the Republican ticket, Tom cotton, Donald Trump, jr.

Yeah, we could still sink way lower the way we fix that, the way we do not sink lower is to solve the problems that got us here in the first place. You know, you can go back through every administration and kind of see when you really just think about it. Even superficially, you, you start to see the mistakes that were made that led to this downward trajectory, right? Obama had the opportunity to end domestic spying programs. He didn’t could have pulled us out of these forever Wars. The George W. Bush started, he didn’t, you know, the use of drones overseas. He didn’t, he could have given a bailout to the American public. He didn’t, he could have prosecuted the makers. He didn’t, all of these mistakes have led to an increase in those programs or in the dangerous activity by those individuals like the banks, George W. Bush, to take it back a little further, had he not started, you know, this so called war on terror, which is just a way to go overseas and secure more resources for the United States under the guise of fighting terrorism.

Again, probably wouldn’t have led to the situation we’re in today. Every step we take down makes it easier to take that next step, right? We get that downward momentum. Sarah Palin as her vice presidential candidate for the Republican party, John McCain feeling perfectly fine going up on stage and singing bomb. Iran, bill Clinton deregulating the telecoms, Ronald Reagan with his destruction of United States labor unions that sent more wealth to the top and crushed killed almost almost to the point of extinction. The U S middle-class. Every one of these was a step downward that led to the worst things that came after it. So how do we get to where we don’t get another Trump to where we don’t end up in that situation? Again, take all the way back to the Reagan years. Folks, stop the inequality. Believe it or not stopping the rampant inequality here in the United States solves a lot of problems.

It truly does. If you solve that problem, if you do not have as much resource scarcity in terms of cash flow among the general public, you’re not going to see people flock to a dangerous demagogue like Donald Trump, but Republicans have fostered. The inequality Democrats have fostered the inequality. We have to do something about that. As Bernie Sanders has been screaming it at the top of his lungs for years, and yes, doing that alone solves a lot of problems. Getting money out of politics solves a lot of the other ones stopping the idolization of wealthy people, solves a lot of problems. That’s why Trump’s president. In addition to the conning and the demagoguery, we worshiped wealthy people in the United States. He was a wealthy person. Let’s put them up there. Trump is not the disease. Trump is the symptom, the real disease. We just ignored it for decades and decades and decades and it spread and it got worse and it wreaked havoc on the American body politic until finally it erupted in that one last dangerous symptom of Donald Trump. That’s a low point for now. We can reverse it or we can continue to sync with it.