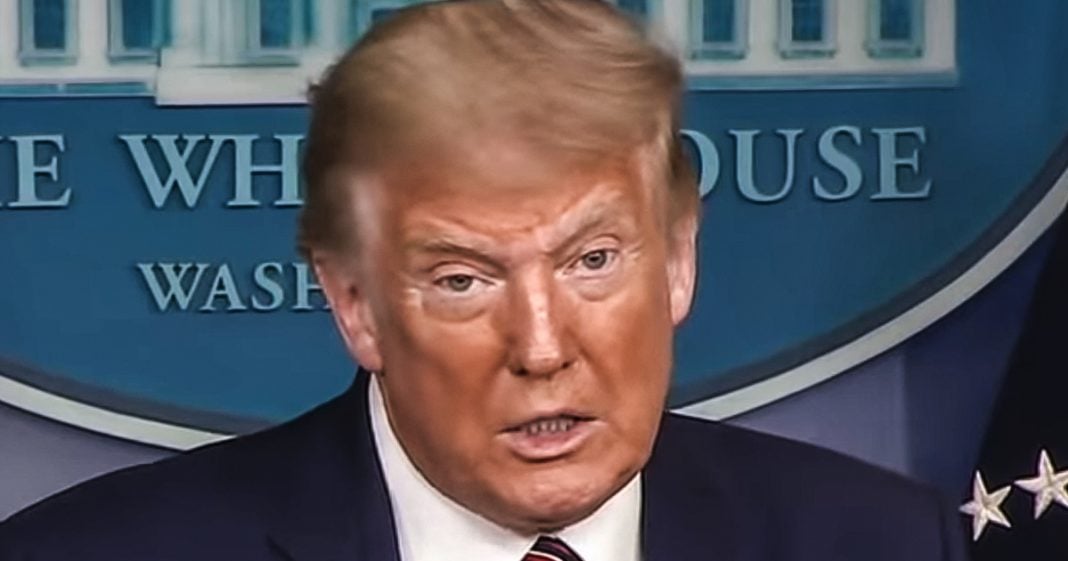 Donald Trump is currently being sued and investigated by numerous individuals and law enforcement agencies, and his lawyers have been able to successfully hold these lawsuits off while he’s president. But if Joe Biden wins in November, all of these cases will suddenly lurch forward, and the President will no longer have an excuse as to why he can’t be prosecuted. Ring of Fire’s Farron Cousins explains what’s going to happen.

You know, there’s a very good chance that one of the reasons Donald Trump is not in prison right now is because he’s president of the United States. And, uh, thanks to the justice department memo, not actually a rule, just a memo, by the way, uh, from the Nixon era, the DOJ, isn’t going to prosecute a sitting president again, not a rule. It’s just a tradition they have of not prosecuting a sitting president, but Trump’s not going to be president forever. And based on current polling, he may not be president for much longer either. So what happens, what happens to this guy who is already facing a myriad of lawsuits out there?

If on January 20th, 2021 at 12:01 PM Eastern, he’s no longer president. Well, I’ll tell you what’s going to happen all hell. All legal hell is going to break loose for the guy, a business insider recently put together a comprehensive list. That’s not even a complete list. Just nine of the biggest lawsuits that the president is facing that are basically going to be put on the fast track. Should he lose the election? Here’s the list? Uh, there is the defamation lawsuit from summer Zervos, which his lawyers have repeatedly, uh, gotten delayed because he’s president of the United States. He can’t be fighting a defamation lawsuit. Um, the attorney general in Washington, DC, who alleges that the Trump organization knowingly overcharged for services at the president’s hotel. Uh, that’s a big one. That’s kind of flown under the radar. And that’s one that absolutely, uh, is going to come to a head once he’s out of office, uh, advice column is EG and Carol alleged that Trump defamed her by denying that he raped her in the nineties.

Uh, they’re still waiting for his DNA on that one. Cause she still has the DNA of the man who raped her. The man who sees she says is Trump. So all it’ll take is a simple DNA test. See if what he has matches what she has and if it does then yeah, that’s defamation. Oh, by the way, it will also prove that you raped her more lawsuits as business insider points out. President still faces a lawsuit stemming from a 2015 altercation between security guards and a group of protestors, New York attorney. General’s also suing the Trump organization to compel it, to comply with her investigation. Those are the big ones that I’m going to hit on those in a minute. Obviously, a president’s former lawyer sued the Trump organization seeking nearly $2 million in unpaid fees. A group of plaintiffs accused Trump and his children of misleading people into selling products for multilevel marketing company.

Uh, that is the pyramid scheme from the teleconferencing software company. Uh, we’ve talked about it on here before, but yeah, they’re facing it basically pyramid scheme lawsuit. Um, president’s niece is suing Trump and his siblings alleging that they screwed her and her brothers and sisters, her siblings. I’m not sure how many she has, uh, I think, uh, but whatever, uh, of screwing them out of the inheritance, uh, Trump hotel company’s actions relating to a property of formally managed in Panama are the focus of another lawsuit, uh, that one’s more of an investment type lawsuit where he could be facing, uh, you know, financial penalties, but let’s face it folks. The two big ones out there, the EEG and Carol defamation suit, because if they get his DNA that could prove that this man did in fact rape her. So that’s huge then of course the other criminal ones, cause unfortunately, statute of limitation on the rape case has expired.

So we we’d know that he did it. We just won’t. Unfortunately wouldn’t be able to do anything about it. Now, the other ones, the potential financial crimes, the tax fraud, the wire fraud, all of that, that the New York attorney General’s working on. Once he’s president, he loses any ability to delay or shield his financial records. All of that is gone because that is the only way they’ve been able to shield it so far. It all immediately, as the courts have already said, it should be goes to the investigators folks we could be. Was it from now to November, December, January in a week, we could be three months in a week out from these financial records being in the hands of these New York investigators. And if that isn’t enough reason for you to just say, you know what? I think I’m a vote for Biden then I don’t know what is.