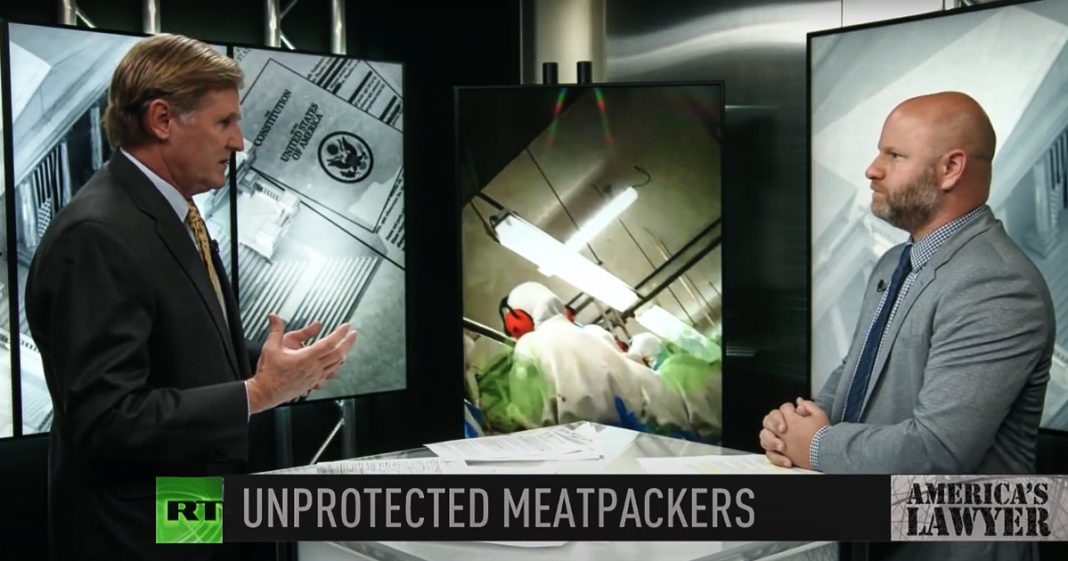 Via America’s Lawyer: Major meatpacking companies deny health benefits to workers who have fallen ill or died from contracting COVID while forced to work during the pandemic. Mike Papantonio & Farron Cousins discuss more.

Mike Papantonio:             Tens of thousands of meatpacking employees have contracted COVID-19 and hundreds have died, but our regulatory agencies are so inept that they, there’s only a few thousand dollars that they’ve even, that they’ve said for fines. I mean, what was it, $29,000? It was some ridiculous number.

Mike Papantonio:             Well, that’s the case. I mean, that’s, that’s, that’s the story, isn’t it? 42,000 people that Smithfield, lets, what an irony. Here you got Smithfield, it’s a Chinese owned company. They’re in there. How many people died from Smithfield? It was like, was it some ungodly number of people that died? Well, there’s 200 people dead. I don’t know what it was for Smithfield specifically. But you had, Smithfield it’s a Chinese company. You know, they, they, they launched the virus for us and they won’t even say, listen, if you come down with it, as you’re doing your job, we’re going to cover you. We’re going to take care of you. If you die, you’re going to have some, your family’s going to have some, some money coming in for your, for the loss, for your loss. And so, so what they’ve done is they’ve turned the workers’ compensation law on its head. They’ve turned OSHA on its head, haven’t they?

Farron Cousins:                  They, they really have because with the worker’s comp cases, they’re saying, well, you’re saying you caught this here, but we really think you probably caught it when you went to the grocery store. You caught it because you were out with your friends. And they do have, you know, there’s very good investigators working for these meat packing plants on their law firms, and they’ll go out and say, hey, you know, we spied them over at this place. We spied them at this place.

Farron Cousins:                  And so that’s probably where they caught it. So they’re doing all the sneaky underhandedness when we can almost definitively at this point prove, they got it from the unsafe and unsanitary conditions in these meat packing plants.

Mike Papantonio:             Well, here’s part of the problem. And I don’t mean to point with too big of a brush, but the worker comp lawyers, the people who typically do workers’ compensation are not really trial lawyers. Okay. They, they, you know, they’re they’re administrative hearings. And so they don’t really build a case to show how ridiculous it is that they can justify it. The, the OSHA standard is clear. The OSHA standard is that you have to have a workplace that’s free of hazards and it’s, and it works in a way to prevent injury, to prevent death. I mean, that’s OSHA and this is just the opposite. They come in. They don’t even give them masks. They don’t even pay attention to the problem for almost two months. No social distancing, no masks. It’s just like a free for all of, of, of this epidemic, right there in these, in these plants.

Farron Cousins:                  It really is. And this story is not just about the, you know, problems with the meat packing plants. It’s about the dysfunction of our regulatory agencies that’s been taking place for over 40 years at this point. You know, it doesn’t necessarily get a whole lot better under Democrats than it is under Republicans.