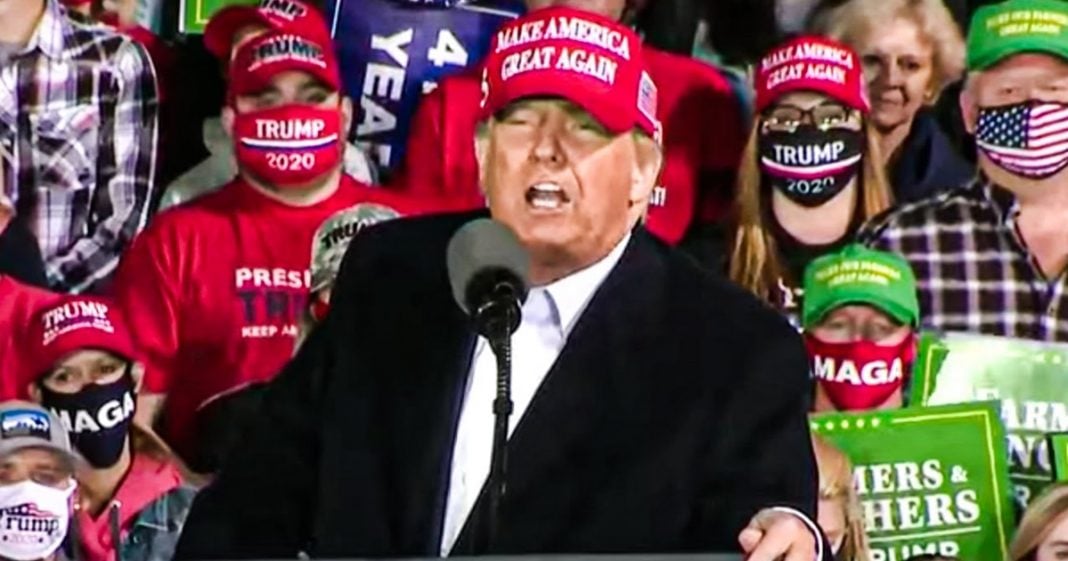 Donald Trump is a whiny little man, and he isn’t afraid to let the world know it. During a campaign rally in Iowa this week, he actually whine to the crowd about the fact that the media didn’t cover his nomination for a Nobel Peace Prize because they were instead covering devastation in places like Iowa and Florida from natural disasters. The man is absolutely shameless, as Ring of Fire’s Farron Cousins explains.

During his campaign rally in Iowa this week, Donald Trump went on a bit of a weird tangent where he started complaining about the fact that the corporate media did not cover his Nobel peace prize, nomination enough. And instead focused on natural disasters here is what Donald Trump whined about to that crowd. Take a look.

Donald Trump:             I get nominated for three Nobel peace prizes, different subjects. And I told the story the other night I was in Florida, where Pennsylvania, I told our first lady, darling, we’re going to have the greatest publicity I’ve ever had tonight. I got nominated for the Nobel prize. You know what that is, darling? Let’s go home. So I leave for the first time in a long time early, I get home. I turned on the television, they talked about your floods in Iowa. They talked about how’s Iowa doing the crops? How’s this happening? How are they doing in Florida? How the three, four stories one after another. Where’s my Nobel peace prize they don’t talk about. I said, you know, darlin, this news is tough. It’s a little tough to crack. When Obama got his Nobel prize, it was so early. He didn’t even do anything. He still doesn’t know what he got it for. They said, why did you get it? He said, I have no idea. And it was the biggest story was all over the place with me, I got three and they got three nominations. Nobody talks about it.

So a couple of points I want to address there. First of all, did he actually have to explain to Melania what the Nobel peace prize is or what a Nobel prizes? That to me seems a little odd either. He’s lying about that, which is the most likely, or she legitimately didn’t have a clue, which is weird because that’s a global thing. Okay? It’s not even like, it’s just a us thing that somebody who, who immigrated here may not know about no, that is a worldwide thing that most people are aware exists. So I’m, I’m assuming that he was exaggerating when he said he had to actually explain to her what it was. Second of all the things the media was covering. Instead, as he pointed out there, uh, hurricanes in Florida, that was actually the hurricane that hit me here, hurricane Sally and the floods in Iowa that destroyed the crops, you know, root, ruining people’s way of life, or at least, you know, their way of life for many, many months to come in the future.

And he’s whining to the same people that had their crops destroyed, livelihoods destroyed, you know, looking to put their lives back together. And instead of him offering help or aid, he instead says, why were they talking about that instead of my Nobel prize? First of all, you didn’t even win it. You didn’t win it. You were nominated. Sure. Uh, in fact, us presidents typically do get nominated regardless of party. And regardless of what they’ve accomplished, they do tend to get, because literally anyone on the planet can be nominated for it. You know, you, you didn’t win anything special by being nominated. I, I’m pretty sure that, you know, a YouTuber who’s far more popular than me. Like, uh, David Pakman, for example, could probably get more votes for Nobel peace prize than you. And he would certainly be more deserving of it than Donald Trump is.

And of course he had to throw in the digs at Obama because the Republicans love to do that. Like why did he get it? Why did he get it? He doesn’t even know why he got it. He got it because of the significance of his election. That’s what that was overcoming. These incredible odds in showing that America had moved forward on race issues. That’s what that was about. Now. You may think that that’s undeserving and whatever, that’s your personal opinion of it, but stop acting like we don’t know why it happened. That’s just one of several reasons why it happened to be honest. But nevertheless, this man is so crave and so desperate for attention. So desperate for admiration that he was in front of the very people who were suffering and complained that their suffering got more attention than this make-believe accolade that he believes he was deserved. That’s pathetic. And honestly, at this point, I think that is the best word used to describe Donald Trump. He’s Pathetic.

I wish more of his followers would wake up and see that. Now you could see some of the faces in the crowd when he made that statement. Uh, they weren’t thrilled with it. Some of them you could tell kind of started to second guess maybe only for a moment, but the fact of the matter is he’s already had to pull his ads out of Iowa. It’s a tight race there as it is, and going there and saying, I wish your flooding hadn’t interrupted my positive news coverage. Probably not going to win you any more votes in that state.