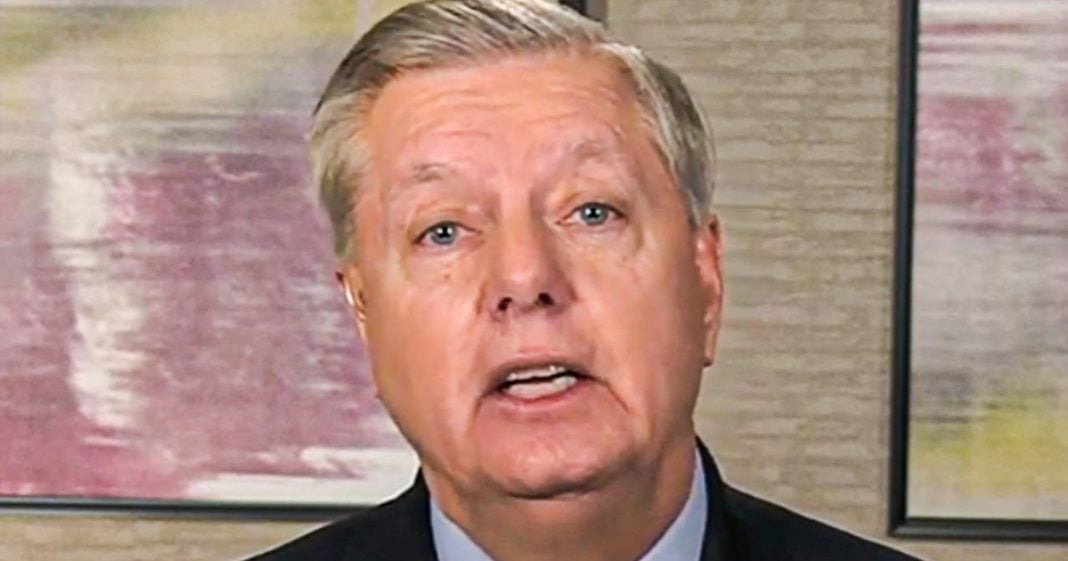 It is a violation of federal law for a sitting Senator to ask for campaign donations while inside the Senate building. But Lindsey Graham did exactly that on live TV this week when he talked about how poorly he is doing in his Senate race and then telling people where they can go to give him money. The fact that he felt confident enough to do this – even though he likely knows that it is illegal – speaks volumes to the attitude the Republican Party has towards the law. Ring of Fire’s Farron Cousins discusses this.

According to the latest polls out of South Carolina, the Senate race between incumbent Republican, Lindsey Graham and democratic challenger. Jamie Harrison, Jamie Harrison now holds a one point lead in that race. That is absolutely remarkable. Uh, it’s still obviously well within the margin of error, there is still, you know, two weeks before the election, anything can happen, but a democratic challenger right now, polling ahead of Lindsey Graham incumbent, Republican is huge. And the amount of money that Jamie Harrison is pulling in for this Senate, race is huge. It is now set the record for the amount of money raised, uh, breaking the record set by a scary precedent, Beto O’Rourke versus Ted Cruz. Now I’ll get more into that in a minute, but Lindsey Graham, uh, after coming out of the Amy Coney Barrett hearing yesterday, decided to let reporters know how bad the race is going for him. And he did it in the hall of the Senate. He was in the Senate building when he made this pitch, which by the way is actually illegal. Take a look.

Lindsey Graham:               Well, I, I think people in South Carolina are excited about judge Barrett. I don’t, I don’t know how much it affected fundraising today, but if you want to help me close the gap, LindseyGraham.com a little bit goes a long way. The bottom line is my opponent raised 57 million, congratulations to him. That’s the most anybody’s ever raised in the history of the Senate. Uh, I raised 28 million. Uh, the most, any Republican has ever raised. I think the contest in South Carolina has taken on sort of a national profile. I think what’s happened in my case is that I stood up for Kavanaugh and that made some people pretty upset on the left. And I’ve been helping president Trump, but I trust the people of South Carolina to get it right. The state’s not for sale. Uh, I feel really good about my campaign. I’ve never felt better about my campaign than I do right now. Gonna work hard, run through the tape.

What Lindsey Graham did. There is illegal. It is a violation of 18 us code six, zero seven. No lawmaker is allowed to solicit funds from inside the building. You cannot use any government facility to advocate for money for yourself or for your campaign, which is why as as many congressional staffers pointed out after this, it’s why they will see their boss. Their lawmaker actually go out of the building and go sit in their cars on their cell phone to make fundraising calls. Cause you’re not even allowed to make fundraising calls from the Senate building. So they have to leave and go sit in their cars. That is a common occurrence. Lindsay Graham knows this because he’s done it. He knows the rules. And yet there he was in the Senate building violating 18, us code six Oh seven saying go to Lindsey, graham.com.

Give me some money. That’s illegal. It is 100% illegal. Now is Lindsey Graham going to jail? No, he’s definitely not a, they’re probably not even going to slap him on the wrist for this. Right? Nothing ever happens to these people when they break the law, but Lindsey Graham cannot afford the negative publicity from this. So that’s where it could end up hurting him again. Jamie Harrison is now pulling one point ahead still within the margin of error, these two. So it’s a statistical tie, but it’s anybody’s race, which is something we never thought we’d see happen. But again, I got harken back to the better award versus Ted Cruz race. Cause nobody thought that would happen. And then suddenly in the final days of it, you know, Rourke, uh, Rourke and Cruz right there, neck and neck, anybody’s race, uh, Rourke raises all this money.

Most of it coming from out of state. And that’s what gets people distracted. You know, we look at these great fundraising numbers from Jamie Harrison, from Bedell work and we think, wow, that must mean that he’s definitely gonna win because people like them a lot to give them a lot of money. We have look at where the money’s coming from, much like Ted Cruz, Lindsey Graham is universally hated except for in their home state. So money coming in from out of state to help Jamie Harrison might make him or allow him excuse me, to, uh, run more ads, but it doesn’t necessarily translate into votes. And that’s the sad part of it. That’s what happened to Beto. Hopefully it does not happen to Jamie Harrison. I am optimistic, cautiously optimistic. I would say I hope against all hope that he beats Lindsey Graham, but we’ve seen this story before and it didn’t work out well, but at the very least, he’s got some new fodder as we head into the final two weeks before the election with Lindsay Graham openly violating the law in the Senate hallway.