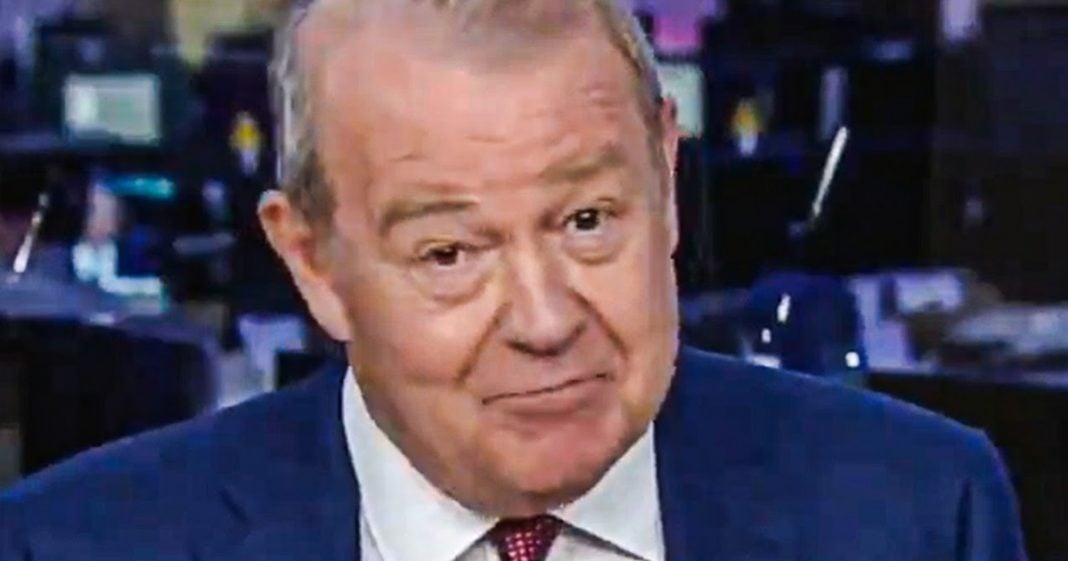 Fox host Stuart Varney did the unthinkable this week by calling out Donald Trump for his repeated claims that Joe Biden is mentally incompetent. Varney pointed out to the President during a phone interview that many people don’t like the President saying these things, but Trump insisted that he has to say it because it is true. But Varney wasn’t actually protecting Biden – he was trying to protect Trump, as Ring of Fire’s Farron Cousins explains.

A Fox host Stuart Varney from Fox business did the unthinkable this week. And he actually called out Donald Trump for his claims that Joe Biden is somehow the candidate who is the most mentally incompetent. Uh, Trump didn’t back down from his claims, even though Varney very timidly called him out on it. Uh, but anyway, take a look at this exchange. This, this is, I think, you know, it was a positive step forward for Stuart Varney. Here it is.

So, as I said before, the clip is very timid. You know, he wasn’t saying, how dare you say no. He’s like, Hey I’m yeah, I’m be honest with you, man. There’s some people who don’t like when you say that, you know, so maybe if you could, on the Trumps, like women say it is the truth, I’m going to say it. I’m going to keep saying it. Then Barney was like, Varney understands several things. First and foremost, he understands that he was not standing up for Joe Biden. Okay. Stuart Varney is never going to stand up for anybody that is not a Republican, uh, back in the early days of ring of fire. Mike Papantonio used to go on Fox news up against Stuart Varney all the time. Varney is one of the biggest a-holes at Fox. Uh, there’s plenty of videos by the way, in our history of Pat.

Absolutely just laying the smack on him. It’s wonderful to watch, but Varney wasn’t standing up for Biden. Varney understands that Donald Trump is suffering tremendously right now with senior citizens and attacking somebody’s mental competence because they’re up there in ages. Doesn’t exactly resonate very well with the rest of that age group, that attack on one in many ways is seen as an attack on all of them. And they take it personally. I mean, Donald Trump is losing senior citizens in the state of Florida. Last poll. I checked double digits by double digits. If you can’t win the elderly vote in Florida, you can’t win Florida. And I think that’s what Varney was trying to protect. He wasn’t saying, Hey, chill out because you’re equally crazy. No, no, no, no, no. And that’s the point we get to in a moment he’s saying, Hey, maybe, you know, some people don’t like it and you need those, some people to vote for you. So Stuart Varney should have straight up, come out and said that and allow Donald Trump to explain why it’s not all old people. You know, I’ve already was a good Republican who could think quicker on his feet.

That’s what he would’ve done. He would have given Trump a chance to separate Biden from the rest of the elderly voting population, but he didn’t do that. And the other point, as I mentioned is that Varney understands that Trump is definitely not all there. You know? And in his rallies this week, he had multiple instances of slurring in a couple of other, uh, I guess you’d call them performances from the president. He sounded a little too gravelly. Like he was getting all like he wasn’t exactly, uh, you know, recovered from the coronavirus as he wants everybody to think he is, he doesn’t sound well. And so Varney is also trying to pull him back from talking about fitness in any way, like, Hey dude, you know, you want to talk about somebody not being fit. Do you have any mirrors in the white house? Have you walked by one, maybe stood sideways and said, Oh my God, I do it all the time. It’s bad. Maybe Trump should, maybe Trump should listen to Varney a little bit. And I guarantee you, that is the only time in my life I’m ever going to recommend anyone listening to Stuart Varney’s advice.