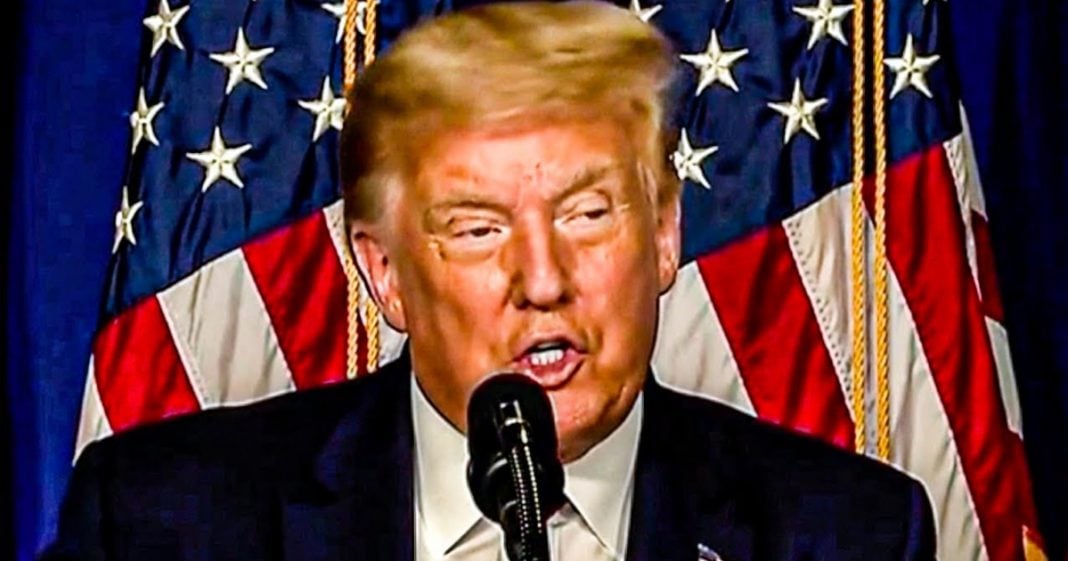 The purpose of Donald Trump’s trade war has always been a little unclear, and now that he has completely abandoned this project, it remains even less clear why it was started in the first place. The trade war is still raging on even if the President and the public stopped paying attention, and it is going to present a huge problem for whoever wins the election in November. Ring of Fire’s Farron Cousins discusses this.

Donald Trump has spent a lot of time recently lying to the public, which there’s nothing new about that, but been lying to us about bringing all our troops back from Afghanistan. Essentially, he is going to end that war. He tells us, but then he also, under his breath kind of tells us, but I’m going to leave like 5,000 American troops there. So he’s not actually ending that war. He’s not ending any war, but there is one war that is still being waged here on American soil that we probably should be paying more attention to. And that is Donald Trump’s trade war, the trade war that’s been going on for over two straight years. Now with much like our Wars in the middle East, no end in sight, no exit strategy, no clear objective. Donald Trump’s domestic and foreign policy are no different. It’s endless war for no apparent reason.

Now 2016, Donald Trump comes into office and during the campaign and during his early months, he talks about the fact that China has been taking advantage of the United States. And he’s never really been clear about how China’s taking advantage of the United States. Now there’s been some talk a little bit about intellectual property theft and sure. That’s that’s concerned, but since we do not necessarily have any kind of global framework on copyright laws, that’s not necessarily something you can, uh, fix. There needs to be international agreements. I mean, we could come up with some kind of framework, some kind of treaty that would allow either the prosecution or the, um, uh, shunning, I guess, of countries who allow this to happen. Sure. But a trade war doesn’t do that. And that’s not even a part of the trade war that that’s not even something that they’re working on with the trade war.

So you can’t even use that as justification for what the president has done. He has slapped tariffs on all kinds of Chinese goods and he’s threatened to do it on Europe. He’s threatening to do it against Iran. He’s threatening to do it against everybody because that’s all this guy thinks he knows his money and he’s not even good with that. And he thinks he is hurting China. He said, repeatedly, this is hurting. China is hurting China. It’s not hurting us. Our farmers, you’re doing great. And yet we’re still every year now having to bail out American farmers, billions of dollars, over a hundred billion dollars to American farmers so that they don’t go bankrupt. Meanwhile, farm bankruptcies are still at a record pace right now for what? And that’s the question that here we are several years into this trade war, we still are waiting for, to have answered for what, what is the end game? What is the goal? What are we to do here with this? What are you trying mr. President to do with this? And more importantly, why have you got.

You have an up, because let’s not forget. I’ve pointed this out several times and I’m, I’m frustrated that nobody seems to care about this. Peter Navarro Trump’s trade leader this summer said, yeah, we’re done with talks for now. We’ve given up it all fell through. Everything fell apart. So we’re done. I didn’t mean the trade war ended. It just means the peace talks ceased. So the trade war is still happening and they have no plan. They’re back to square one. And we don’t know what square one really is because we don’t know what the point of any of this is because when you dissect any of the talking points that this administration or that any of the right wingers have thrown out, none of them hold any water. As I mentioned, the whole thing with the intellectual property law, that’s not a part of this, so why bring it up? That’s not something they’re trying to resolve, you know, taxing steel, doesn’t hold them accountable for making fraudulent handbags.

I don’t see how that works. And neither do the people who are being hammered by this trade war. And here’s the scariest part. What happens if Trump loses? Okay. And let’s assume he, that he can’t challenge the results. Cause most likely he’s not going to be able to challenge the results. So he’s sitting in office for two and a half months just waiting to be kicked out by Joe Biden. What’s he going to do is he can end the trade war or is he going to escalate it forcing Joe Biden into a situation that he ought not be in, in the first place? Those two and a half months are going to be pure chaos. And I guarantee you, Trump is going to try to make it as bad as possible for Biden. If Trump loses and the trade war is one of those areas, we got to keep our eyes on because that’s the thing that Donald Trump could absolutely blow up just to spite Biden and the American public.