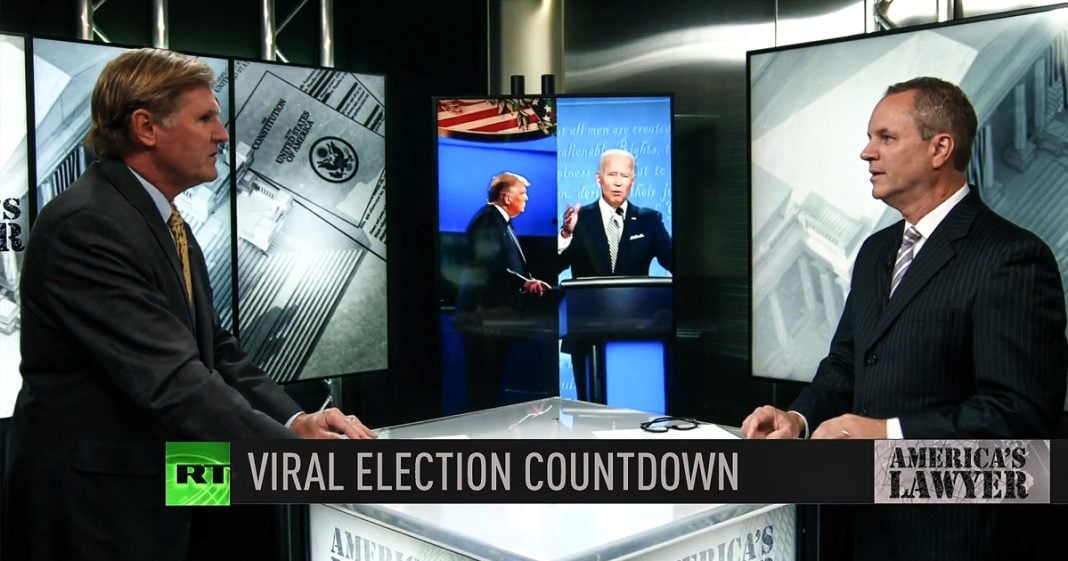 Via America’s Lawyer: President Trump’s COVID diagnosis and the chaotic presidential debate have pushed the needle in states across the country as election day is just three weeks away. Media analyst David Lamb joins Mike Papantonio to discuss.

Mike Papantonio:             President Trump’s COVID diagnosis and the first round of presidential debates, you gotta wonder what kind of impact has it had on the upcoming election? I have David Lamb here with me to talk about that. David, president Trump, he tests positive for COVID-19 and you know, everybody sitting there like, like bated breath, you know, breathlessly, what is this going to mean?

Mike Papantonio:             And it got the same talking points back out of there. I was amazed when you have these boneheads out there saying, oh, he doesn’t really have COVID-19. It was such a stupid play.

Mike Papantonio:             I mean, it was like, he’s making this up. The best play was exactly what you said, that is, you know, this should bring attention to how poorly he handled this crisis. And ultimately listening to what you’re saying, it sounds like that’s what happened.

Mike Papantonio:             I got sort of lost in the shuffle, but, but we have a debate just, you know, just just days before president’s positive on COVID, any idea how, how, how that, how all this came together and how it affected voters. The debate performance obviously was awful, you know, for both candidates, but they must’ve thought Trump was worse. You know, I, I personally thought he was worse. Biden, Biden, you know, he, yeah, he looked like a goofy old man sometimes, but what’s your take?

Mike Papantonio:             The internat, by the way, the international criticism was over the top. It was like, really, these are the best two you’ve gotten the entire United States? They call, they called it everything from political cesspool on.

Mike Papantonio:             Yeah. So he moved into his regular, you know, his regular mode demagogue rather than talking about real issues that he could have talked about. It became a screaming match. I mean, it was, it was an embarrassment. I mean, both, for both candidates.

Mike Papantonio:             And when the world looks at it and says, yes, it was an embarrassment, gee wiz. Look as this race, as it comes down, it’s going to come down to a, a handful of battleground States. Give me your take on it.

David Lamb:                         So there are a handful of States that really are in play. New York, California, clearly Democrat. The Southern States, the Alabama’s, the Mississippi, the Tennessee’s, those are clearly going to go Trump and Republican, but of the States that we’ve been following, about 10 of them, solid Biden States. Pennsylvania, Biden six and a half. Michigan, Biden five. Wisconsin, Biden five. Arizona, Biden by three. New Hampshire, Biden almost eight and a half points. In Nevada, Biden 5.3. So now those are the States that are clearly, Biden has a comfortable lead. If you look for the States where, where Trump with the battleground States, that Trump has a comfortable lead, the, the best scenario you find is in the state of Texas. And that’s at three, at this point, the real clear politics poll, which is the aggregate, the average of them, shows Trump up 3.2. The States that are too close to call Ohio, Florida, North Carolina, Georgia, Iowa, Trump won almost all of those in 2016. The fact that they still are in play is bad news for the president.

Mike Papantonio:             I mean, if you’re calling the race now, I mean, I’m just not, I’m not seeing anything that’s so dramatic. If I’m Biden, I’m saying look, based on these numbers, yeah, let’s have another debate.

Mike Papantonio:             What are the issues that are going to define this race as we look back the last few weeks?

David Lamb:                         So there, the issues that are most popular and matter the most, economy and terrorism are one and two. That’s good news for Trump, both of those. Whenever it comes to what is all the rest of the top five, which is the response to the coronavirus, healthcare overall and education, that rounds out the top five, those lean more and are more helpful to Biden. A couple of things that are keep in mind here Mike, you know, three weeks before the vote in 2016, that’s when that access Hollywood tape came out, everybody said, it’s over for Trump, right? There’s no way he can come back from that.

David Lamb:                         And me too. It’s just, how could, how could that happen? Yet he did. So I would say, the scenario right now is bleak for the president, but he was counted out in 2016 the minute the polls were off. It’s going to come down to, who’s going to turn out. Are, are the, the Biden backers and the Democrats feeling complacent? Think they’ve got in the bag and don’t show up. Because you know Trump supporters are gonna show up.