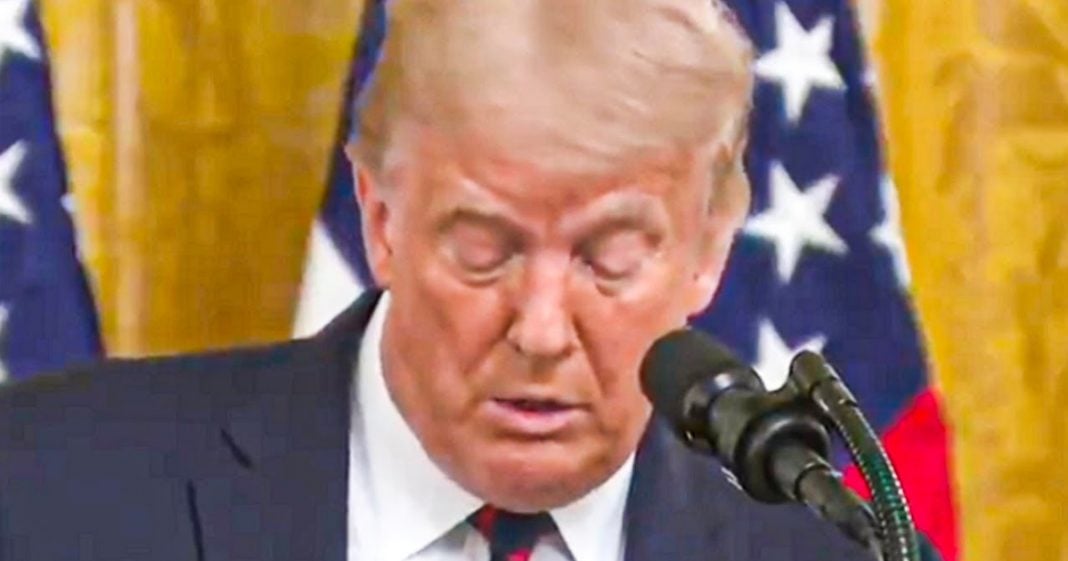 Another investigation into the Obama administration by Bill Barr’s handpicked crony has yielded no results. This is the third investigation this month that has concluded without any charges being filed or even any possible criminal conduct being exposed by Obama and Biden. The Trump campaign is running out of things to investigate, as Ring of Fire’s Farron Cousins explains.

Well folks, we are about halfway through October now. Um, so wait on October surprises, right? I mean it’s election year. There’s gotta be those October surprises and to their credit, the Trump administration has done a good job of trying to create October surprises. It’s just that every time they’ve tried to, it has fallen completely flat. And we had another one of those this week when it was announced that a William bar’s handpicked, uh, investigator a us attorney by the name of John bash, who had been investigating the Obama administration, uh, their alleged unmasking scheme, which has where they wanted the names revealed, uh, in intelligence information, the names had been redacted. The Obama administration wanted them released. That was the unmasking. Um, and the Trump administration thought, Hey, we’re gonna investigate this. We’re going to find out they did something illegal. Cause you can’t just release this name.

Totally, totally gonna bust Obama and by extension Biden for this. Well, it turns out that investigation actually wrapped up a little over a week ago. And then a week later we found out that it all came and went and was done. They didn’t even release a final report, bash didn’t release a final report because he didn’t even find any thing worth summarizing. I would think they didn’t commit any crimes would have been sufficient for a summary, but you know, bar and Trump, I’m sure didn’t want to release that report out to the world. So they buried it. They pretended Nope. We, we didn’t, uh, John bash never heard of him unmasking. What is that? All y’all are crazy. We didn’t do any of that, but it leaked to the press. And so finally, yeah, everybody knew they were investigating. They were hoping to have it wrapped up and released in October as this big, Oh my God.

Look at the crimes. They committed thing except they didn’t commit any crimes. Uh, you also have the other investigation by the way, taking place, uh, trying to figure out if you know, the origins of the Mueller probe, I guess is the overall theme of that one. But mostly Trump wants to know if he was spied on he wasn’t, cause they’ve already investigated that and found there was no wrongdoing, but anyway, they’ve got another us attorney working on that one. Uh, Durham is working on that one. They were supposed to get their interim report before the election. And then it was announced earlier this week, the Durham says, I’m not going to do this, that, so here goes that October surprise. Oh. And by the way, you’re also at the beginning of October had Senate Republicans quietly on a Wednesday morning, released their report into the alleged wrongdoing of Joe and Hunter Biden.

And you know what? They found nothing. They, they, they didn’t do anything wrong. There was no illegal activity there. So we’re just going to release like 6:00 AM on a Wednesday. Everybody’s gonna forget about it. Okay. So those were the three potential October surprises, crap, crap, crap. I need, if anything, all their October surprises did was exonerate Obama and Biden for some of these activities that even some of us progressive thought, you know what? Maybe there’s something. No, there was nothing. There, there was nothing. There, there was nothing there. So what now? Well, they’re hoping to ride the tide of this New York post story. Uh, that’s the story that came out Wednesday morning, the bombshell, the emails that were uncovered. Yeah. Let me tell you how trustworthy that story is. So they bring in this broken Mac book, uh, to a computer repair shop. They never come back to pick it up.

They never pay their bill. So right off the bat, even just that you’re like, that’s the Mac book. That’s a very expensive you’re you’re going to come back for that. You wouldn’t bring it in to be fixed if he didn’t want it back. So right there, huge red flag about the accuracy of this story. Then you had the technician who worked on it, who in the process of working on it came across emails from Hunter Biden and executives at Barisma asking him. And then later emails thanking him for introducing him to his vice president father. Ooh, the smoking gun emails, New York post says, man, the email addresses fake. Um, the, the verbiage in the emails seems very fake. Now I’m not saying any of it is fake. I’m saying it seems fake because one of the email addresses is dot Ukraine. Folks, New York post is going to get their asses sued so bad.

Cause there’s no way this time had gotten to the rest of the ridiculousness. I have to finish this. I’m sorry. Um, so anyway, like the guy saw the emails on there and allegedly a video of Hunter Biden smoking crack because that, you know, when you do drugs, you always have videos on your computer. If you’re doing, doing the drugs otherwise, how are we going to know if you do them, you got to have video evidence, right? That’s totally a thing that happens. So the technician, cause the FBI says, Oh my God, I have Hunter Biden emails. I have Hunter Biden, smoking crack videos. FBI comes and they confiscate the hard drive. But this computer technician had the forethought being the smart guy he is. And also knowing that they’re totally not coming back for the hard drive makes an illegal copy of it. So he’s illegally copied of it. So he’s now committed a crime and then he takes his copy and he sits on it for almost a year because this happened in late 2019. So he’s got all this damning evidence allegedly. And then last month he makes a phone call to Rudy Giuliani somehow gives a hard drive to Rudy Giuliani who then turns it over to the New York post. And then bam, October surprise. That is the most unbelievable story imaginable.

I I’m fairly confident. We’re going to find out that this whole thing was a fake, was a fraud, was a hoax, whatever it is. But even if it wasn’t the best part is that even if all of this is true, none of it was a crime. Even if they went through and did create this as an elaborate hoax, you still didn’t implicate anybody in criminal activity. You’ve implicated them in immoral activity, unethical activity. Sure. But there’s nothing prosecutable in there. Like there is literally nothing in there. That’s going to send a single person to jail. Probably not even spark a single investigation. Do you know why? Because we’ve already had the investigations and they’ve all concluded. The Joe Biden, Hunter Biden, Obama, everybody up to this point has been completely exonerated by Republican led investigations. Don’t you think that this computer tech who had this spare copy of the hard drive or you know what, screw that, don’t you think the FBI who allegedly had all these emails on a hard drive, don’t you think they might have tapped on the shoulder of these other federal officials working on this investigation and said, Hey, you may want to take a look at these that I have.

They’re just sitting here. Yeah. I, Rudy Giuliani dropped him. I don’t know. Right. Did there’s other people in your department who are already investigating this? I am sure you would have picked up the phone or maybe walked over to their cubicle and said, Oh, by the way, here’s that smoking gun for your investigation? You wanted, Hey, anything to help this story is ridiculous. Again. Totally not saying it didn’t happen. It could have happened. And even if it did, it’s still not illegal. By the way, it’s put together the way the New York post told this story. To me, there’s literally nothing believable about it. And I don’t think it’s going to move the needle one bit. So there’s your October surprises folks, three exonerations and uh, the most unbelievable story that the New York post has ever reported.