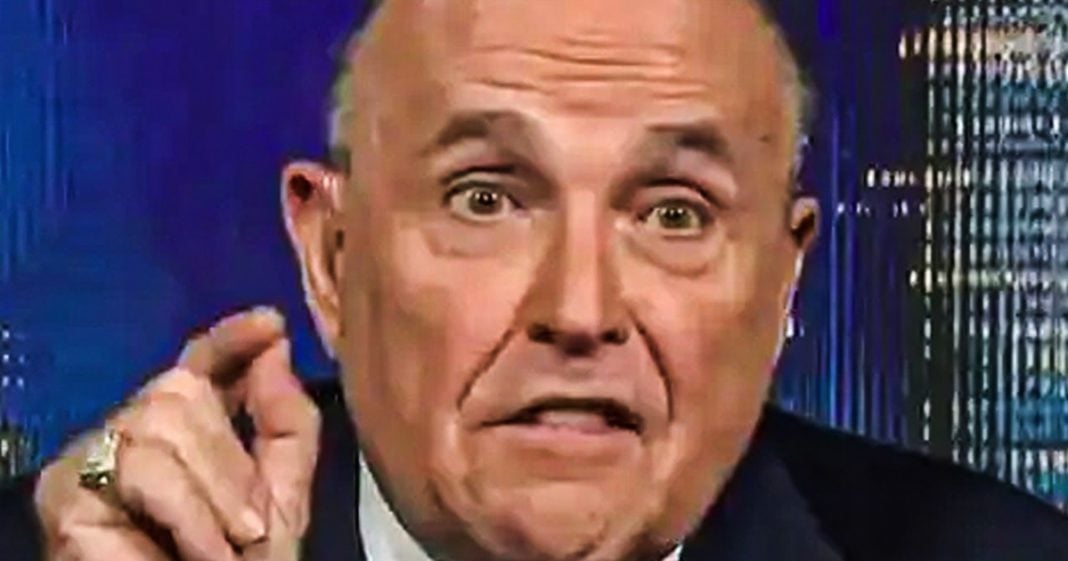 According to reports, Donald Trump has once again reached out to Rudy Giuliani to oversee what could be a major legal battle for the President: The results of the 2020 Presidential election. Giuliani nearly gave up the game as Trump’s lawyer for the Mueller Probe, and his presence is likely to make things worse for the President, not better. Ring of Fire’s Farron Cousins explains what’s happening.

It was recently revealed that Donald Trump has already reached out to his mastermind attorney to kind of spearhead his campaigns, probable legal challenges to the results of the 2020 election. And for those of you haven’t been paying attention for the last four years, that legal mastermind happens to be Rudy Giuliani. So Rudy Giuliani is going to be the one leading any legal challenge that Donald Trump and his campaign have to the results of the 2020 presidential election. A Rudy Giuliani, as most of you may remember, uh, was the lead attorney for Donald Trump’s, uh, legal team handling the Mueller probe and, uh, Giuliani had a knack for going on TV frequently during that time and saying stupid things that always appeared to implicate Donald Trump and further criminal activity to the point where they had to essentially ban him from going on TV, because he was such a horrible representative and lawyer, but still something within there must have spoken to Trump.

And he looked at Rudy again, seeing what’s coming with this election and said, you know what? I like him. I like this guy, something about him. I trust him to challenge the results of a national election so we can win a big gamble. Right? I mean, that’s, yeah, that’s pretty intense strategy. They’re going with the, the weirdo, but sure. Why not? Look, here’s the thing, folks. It doesn’t matter who was on Donald Trump’s legal team, which they’re also going to have Jay Sekulow on there as another one of Trump’s attorneys. They’re going to have some, some good attorneys. They’re also gonna have some bad attorneys cause Trump hires lots of bad attorneys, but it doesn’t matter. They’re going to challenge the results of the election. No matter what, the only question is, how are they going to challenge? It doesn’t matter who the lawyers are.

You still have to actually have a case in order to file it. I have seen some of the best lawyers in this country, a literally hall of fame, trial lawyers for, from the trial lawyer hall of fame. I’ve interviewed all of them and they have brought cases that don’t ever even make it to discovery because they get dismissed because it turns out there’s no standing, there is no actual injury. So even the best lawyers in this country putting together the best possible argument can be told by a judge. I don’t see any actual damage here by go get out folks. This kind of thing happens every day. And right now everybody is freaking out and you know what? We should be concerned about. Donald Trump challenging the results of this. You know, we should be concerned about Amy Coney Barrett being on the Supreme court at that time.

But we also have to understand that it’s unlikely that any kind of legal challenge to the presidential election is ever going to truly materialize because you have to have some kind of evidence to show that you were in fact wronged before you can file a lawsuit, dude, just because Trump’s cause I don’t like the results I’m filing a lawsuit doesn’t mean he can file a lawsuit. Everybody needs to kind of calm down a bit about this. Like I said, we should be concerned. Absolutely. But Trump wants to challenge the results just because he’s hiring all these lawyers doesn’t mean they’re even ever going to be able to file something. If they do not have real evidence that they were wronged, they can’t file a suit. It will be dismissed on its face. That’s now it works. And even they can’t overcome that. Do you know how we know that?

Because we have already had Trump appointed judges over the past four years, dismiss lawsuits brought by Trump on those grounds saying this isn’t a case. This isn’t a thing that you filed here. Thank you for giving me my job, Bob, but shoe. Yeah, this is, this is a joke by. So I think everybody could maybe, you know, not saying don’t worry about it, but maybe don’t stress about it because even some of the biggest, most corrupt partisan hack judges we have in this country have still ruled against this man who gave them their job. We have seen liberal judges rule against democratic presidents on procedural issues, such as this bushes lawyers did or, or, uh, judges, excuse me, did that to him as well. It happens frequently. So again, be weary pay attention, but I think all the stressing and freaking out about it, we can relax at the moment, especially now that we know the Rudy Giuliani is the crack pot in charge of it.