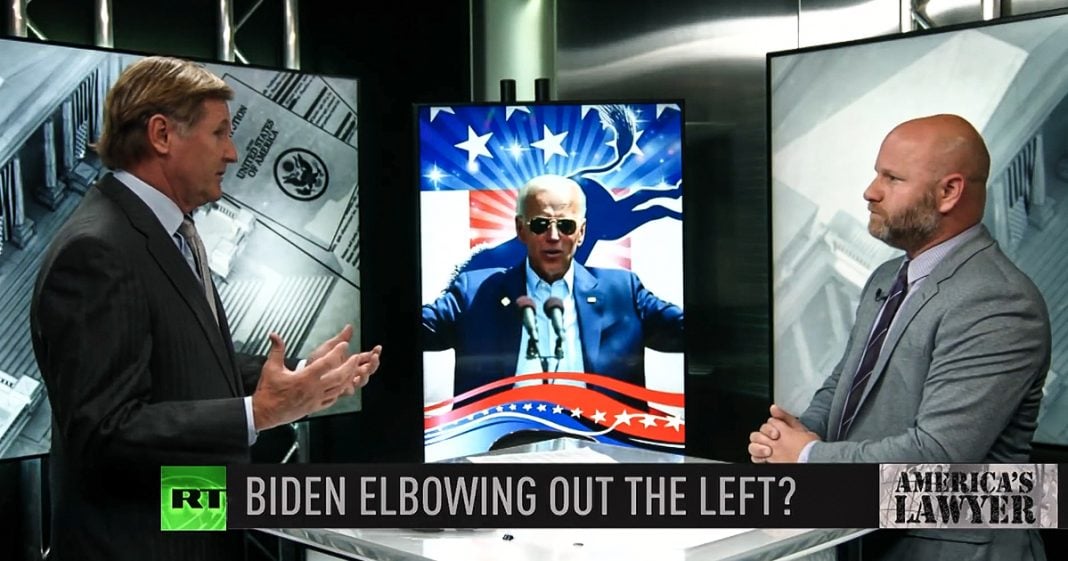 Via America’s Lawyer: The first round of presidential debates left progressives wondering whether Biden was giving them the stiff arm, but the entire debacle has left world viewers appalled by the chaos which erupted between candidates. Also, it’s a buyer’s market for the HuffPost publication, which Verizon owns and has dubbed a money pit for the telecommunications giant. Mike Papantonio & Farron Cousins discuss more.

Mike Papantonio:             Joe Biden might’ve done a job appealing, a really good job, appealing to moderate voters last week in the debate. But the truth is he didn’t do himself any favors trying to distance himself from Bernie Sanders and all of the progressives that support Bernie Sanders. I have Farron Cousins with me from trial lawyer magazine to talk about it. Wow. I mean, you know, it seemed to me that Bernie Sanders was out front in, for him. I mean, Bernie Sanders took it on the chin by all of his base to come out and defend Biden. And then by the other night, what was it? Just an old folks moment or the medication wasn’t right. What happened?

Farron Cousins:                  Well, Trump actually did a really good job of, of making Biden, offend really, the progressive left of the democratic party. He constantly said, well, you, you, Bernie Sanders is pulling the strings. You like Bernie’s plan and Joe Biden would have to say, no, I don’t. I am the democratic party. Joe Biden said at one point, and that’s a terrifying thought to anybody who calls themselves a Democrat. But he, Trump laid the bait for him. Because as soon as Joe Biden would say, no, I don’t like Bernie’s plan, Trump would say, ah, you just lost the progressive left. It was a brilliant trap to be honest, the first time I’ve seen Trump really play politics like that, and Biden fell right into it and, and angered and the entire progressive left.

Mike Papantonio:             Yeah, I mean, but he went out of his way. I mean, he attacked the guy, Bernie Sanders, this old character who’s there for him, goes on the air for him, says, this is the guy. Progressive’s unite around Biden. Please do this for me, Bernie. And then this freak in the middle of the debates starts calling him, you know, like he’s some crazy old socialist, same way with AOC, right?

Mike Papantonio:             It’s got a lot of crazy stuff in it, but it’s got some real potential, to tell you the truth. So the last thing he ought to do is distance himself. He needs to embrace it, say, this is a good idea because look, you know, he’s our next president. I, and if I’m looking at the polling I’m looking at today, I mean 16 points after the debate. What’s your take?

Farron Cousins:                  Well, that, that to me was shocking. I immediately thought after that debate, I said, okay, Biden went in with the most to lose and I don’t think he lost anything, but I don’t think he gained anything. You know, the whole thing was a chaotic mess. I mean, I think that is the best description of it.

Farron Cousins:                  Well, they they’re shocked, one, that America has devolved into this because I think really this is the first time that the rest of the world is paying such close attention to, you know, things like our debates. They always pay attention to our politics, but not necessarily the way that we do. We see this all the time. This was nothing new, but the rest of the world finally got a good taste of what we have been seeing for 20 years, this disgustingness.

Mike Papantonio:             Okay. So here it is. From the UK, national humiliation, it made me weep. Dog whistling, blatant dog whistling. That was the, that was the night that we watched. Chaotic childish grueling. It was impossible to watch. A terrible storm that came from France. Germany, a TV duel, like a car accident between two dummies. I mean, so that was the take. Two old, crazy guys up on stage yelling at each other. I mean, how do you take anything? But the point is the point is Biden weathered it and I do believe he’s going to be elected President United States. You know, short of something I’m not seeing right now.

Farron Cousins:                  And neither one of those is a good prospect for them because we had both friends and enemies abroad.

Mike Papantonio:             Yeah. Media outlets around the world reacted with shock and horror last week during the presidential debates and, you know, the truth is, as we talked about, as we talk about that, what impact does that have on us, Farron? This, this, this international, oh my God. I can’t believe this is playing out in front me. What do you think?

Mike Papantonio:             Let me tell you something, if you look at this, this wasn’t, this international review of the two dummies onstage, this was not kind to Biden either.

Mike Papantonio:             And so, so that’s, that’s really the big takeaway. Well, okay. This is it. This is, this is the best you have, really? I mean, that was the international. This is the best you have, really? Verizon is looking to dump their ownership of the Huffington Post as readers abandon that liberal outlet. We’ve been talking about this so long haven’t we? Okay. Verizon is forced, they literally are forced to buy this thing called HuffPost that never made any money. It had such a narrow niche that it never will make any money. And they, they, they were forced to buy it in that $4 billion acquisition. But now they’re trying to get rid of it and they can’t even get rid of it. I mean, it sounds like a fire sale.

Farron Cousins:                  It really does. And it’s, it is sad almost to a degree. You know, a lot of us Huffington Post has been around and they’ve been doing this just as long as you and I have, but Huffington Post evolved in the wrong way. In the early days, Huffington Post was where you went. It’s where the intellectuals would post their articles. You didn’t have to wait for it to come out in a major newspaper. They could just do it whenever they had these thoughts and ideas. And that’s what it was. It was instantaneous. And then after it got sold to AOL, they got rid of the good named writers. They got rid of the investigative journalists from Huffington Post and instead they moved it into more of the infotainment, you know, 20 top pieces of clothing that you need to wear this summer. Things like that instead of saying, here’s where the opioid crisis is hitting the hardest, we were on the ground.

Mike Papantonio:             Okay. So now you have this, you have this organization, it is going to be a fire sale. I mean, if you’re working for, if you’re working for HuffPost right now, get out, because Verizon’s going to do whatever they can to get rid of it. The first thing they’re going to do is they’re going to start cutting so dramatically. So A, there used to be a couple of investigative writers, they’re gone. They’ve moved on to a really good organizations.

Mike Papantonio:             So, so what ends up happening is they have this shell that they used to have these kids coming out of college and they would get paid $30,000 a year, $40,000 a year to almost slave, slave labor wages to keep things turning up. They used to have celebrities that would write stories, for free. You know, me and my vacation in Pango Pango. They used to have these things that you said, oh, well, you know, it sounds like fluff. I’ll read it anyway. Just to see what, what, see, see how bad this, this organization has fallen. But now it’s even worse. I mean, have you seen the pub, the public where you, you write your own story and they print it for you?

Farron Cousins:                  Yeah. That is absolutely a joke. And then on their political side, which again, they used to have really good, hard hitting political information. And that’s the difference. There’s no more information. They’ll, they’ll take a bunch of tweets that they found, oh, Trump tweeted something stupid. Here’s all the crazy responses to it. Look at these people. They’re really going after him. That’s not journalism, that’s filler.