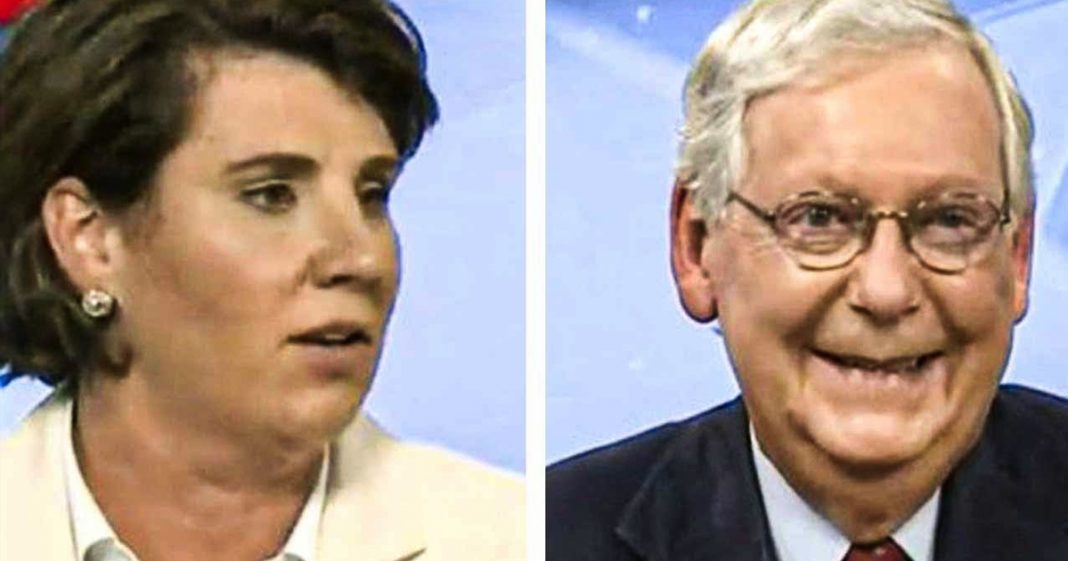 During his Monday night debate with rival Amy McGrath, Mitch McConnell began laughing like an evil supervillain when he was called out for doing nothing to help struggling American families during the pandemic. There’s a reason he was laughing, and it wasn’t because he was nervous or because he actually found her accusations humorous – it was because he knows that he is untouchable. Ring of Fire’s Farron Cousins discusses this.

On Monday evening, Republican Senate, majority leader, Mitch McConnell, debated democratic rival Amy McGrath in a, what is their only debate that they’re going to have. And there was one point in the debate when McGrath started talking about the fact that McConnell has been blocking any form of COVID relief since may and Mitch McConnell responded by giving this weird guttural almost super villain like chuckle. Here’s the clip for anybody who hasn’t seen it coming back three, two, again, that’s that’s supervision. No, there’s 100% what that is now. I understand it is Wednesday. And most people talked about this on Tuesday, the day after this happened, but there’s a reason why I actually waited. I had no intention of actually talking about this because so many other people had, but nobody hit on the actual reason why you laughed. It’s not just that he’s an evil bastard.

It’s not just that he doesn’t care that laugh had more to do with the fact that he knows he can do whatever he wants and nobody’s going to hold him accountable. That’s what that laugh was about that laugh. Wasn’t about actually withholding the COVID aid or slowing it down. That laugh was because the man is on touchable in his own mind. And to be honest from the looks of it, he’s untouchable in this Senate, race to Amy McGrath, unfortunately is not going to win. And I don’t even know how unfortunate that is considering the fact she is a pro Trump Democrat. If she were running in any other race, in any other place in the country, she’d be running as a Republican. She is one, you had a real progressive in the race that was actually doing really well in the head to head polling against Mitch McConnell, Charles Booker. Uh, but you know, the establishment decided to put all their eggs in the Amy McGrath basket. And this is what we have kind of a lose, lose situation. Yeah, McGrath’s the lesser of two evils probably, but McConnell’s winning in the latest poll by nine points. She’s not going to make up that deficit in a couple of weeks.

Uh, back in may, she was actually leading Mitch McConnell. The only time she’s led in this race, she was beating Mitch McConnell by one point, uh, Mitch McConnell’s biggest lead that he’s had has been over 15 points is not closing. As we approach election day, it’s actually starting to widen a little bit. It had closed. Then it started to widen. Mitch McConnell knows he’s untouchable. That’s what he’s laughing about. He’s about the fact that it doesn’t matter what he does. Nobody’s going to get rid of him in Kentucky. He will leave the Senate when he’s no longer breathing, that’s what’s going to happen. He even pointed out in the debate. Nobody brings home the bacon for Kentucky like he does. He said in that debate, what he is allowing Kentucky to do is punch above their weight grade or their weight class. They’re getting more contracts really.

Then they should, from the federal government, more federal money is flowing into Kentucky. Then bigger States that need the money more, but Mitch McConnell’s directing it towards Kentucky. And the people love that. Now the thing is that money isn’t actually going to the people of Kentucky is going to Mitch. McConnell’s wealthy donors. So there’s, there’s no trickle down there, but the people in Kentucky don’t necessarily realize that they just see, Oh, wow, look, he brought all this stuff into Kentucky. Good for us, right? Maybe I’m not benefiting, but surely my neighbor is, or, or their neighbor is, or, or maybe it’s their neighbor. Somebody’s benefiting. No, y’all aren’t the wealthy elite in Kentucky are Mitch. McConnell’s donors are, and Mitch McConnell is, but he’s fooled enough of you into thinking that bringing big money into Kentucky for wealthy Republican donors is somehow good for everybody else. Along the food chain. He has done a great job of that because that’s how voters in Kentucky view it. That’s why he’s winning. That’s why he’s going to beat Amy McGrath. And that is why he was laughing in that debate.