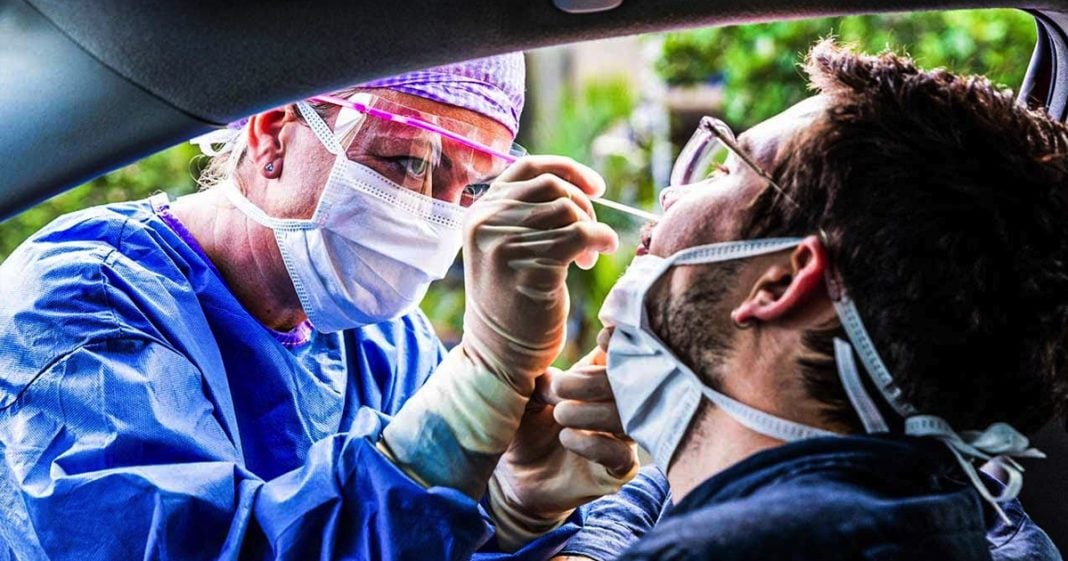 Science-denial is finally starting to catch up with Republicans, and not in a good way. The number of COVID-19 infections in red states is growing at an alarming rate, and there seems to be absolutely no sign of things slowing down. This pandemic is going to continue to rage even longer as Republican leaders continue to pretend that science doesn’t exist. Ring of Fire’s Farron Cousins discusses this.

Wednesday number two, three, two, one, Donald Trump still believes that the coronavirus pandemic is eventually just going to disappear here in the United States. And not necessarily, eventually he believes that very soon. This is all going to be over that we’re on the other side of it. You know, things are getting better. Things are going back to normal. Well, just because people want things to go back to normal and plenty of people are acting as if things are back to normal. The truth is things are getting worse. And if you happen to be one of the unfortunate millions who lives in a red state, things are getting much, much worse. A new viral chart, animated chart has been going around the internet for a couple days. Now, showing how bad things are here in the United States. And as you can see from the chart, there’s so much worse in red States.

In fact, since June things have gotten far worse in red States than they have in blue States. So here’s the chart in case you haven’t seen it now, as you can see, it starts off. Yeah, you got some blue States up there too. But then as the days, tick by as the weeks tick by as the months tick by red States top everybody else, state of Florida where I am right now, unfortunately, tops everybody. Like we, we win. We’re the worst. And folks, there is a reason for this. This is what happens when you have a political party whose entire identity is based partly around their belief, that science is not accurate. A party of science denial is what gave us that chart. Politicians thinking they know better than people who study these kinds of things for living politicians who think that there is some kind of liberal conspiracy to get science, to turn against Republicans.

These people should never be allowed to hold public office again. I mean, the fact that any of them could be reelected after what we have seen them do this year, this, this should be the defining moment of the United States. Our horrid response to this pandemic should, if we, as a collective had common sense, which we don’t, but it should have been a turning point for the United States where we once and for all shed the science denying politicians, we said, Hey, thank you for your service. Actually. No thank you for your service. Get the hell out of here. Don’t ever bother us again. We’re moving forward as a country and we’re not going to let you continue to us backwards. That should have been the lesson learned. That should have been the message that we send, but it won’t be, this is a uniquely Republican issue.

Folks. That is what the graph is telling us who reopened first before it was even time red States who refused to put statewide mask orders in place. The red States who waited to the very last possible minute to shut down red States, who’s acting like none of this ever happened right now, even though their States are still saying thousands of new cases per day, red States, it truly is that simple folks. It really, and truly is that simple. This is what science denial gets. You. All of the people who have now gone to an early grave because of these Republican politicians, those people alone should be enough to get every single one of you to say, you know what? I am never voting for another science denying Republican again for the rest of my existence. This country would be a much better place if more people had that mentality. But unfortunately the lessons will be forgotten. Most people won’t even learn a lesson at all. Those that do though, forget it eventually and will fall right back into the same cycle.