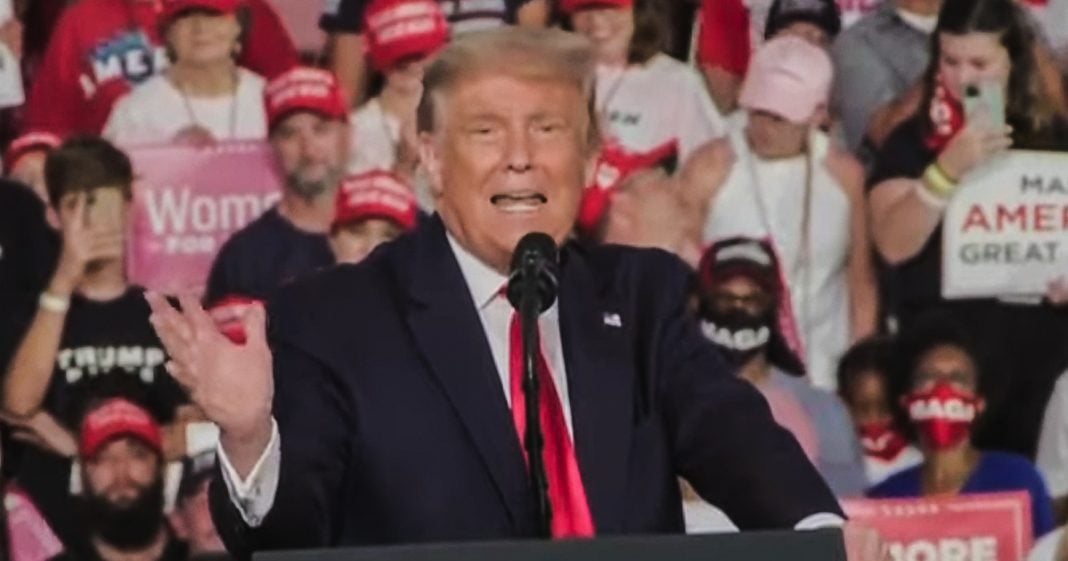 Donald Trump went on an incoherent Twitter tirade this morning, and one of the things he ranted about were the reports that his campaign is out of money. Trump assured the public that these claims, like all other negative news about him, is totally fake. But the evidence suggests otherwise. His campaign continues to pull ads in swing states – a puzzling strategy as he lags behind his rival with weeks to go. Ring of Fire’s Farron Cousins discusses this.

As part of his early morning Twitter tirade, where he sent more than 55 tweets in the span of two hours, uh, tweets and retweets in the span of two hours this morning. Uh, one of the things that he said was that his campaign is totally not out of money and that all the reports saying he’s out of money are totally fake news. Uh, here is a series of two tweets that he sent out back to back telling us just how great the financial situation is with his campaign. Here it is. I keep reading fake news stories that my campaign is running low on money, not true, and if it were so I would put up money myself. The fact is that we have much more money than we had four years ago, where we spent much less money than crooked Hillary and still easily. One, three Oh six to two 23. Uh, much of the money we have spent on our ground game, uh, said to me the best ever put together, uh, I’ll let you know how could it is on February 3rd, very expensive to do, but opportunity could be big. I will spend additional money if we are not spending enough. Now I put the inflection in there of, of somebody who’s a little bit desperate and obviously lying through their teeth because that’s, what’s happening in this tweet. You’re running out of money. That that’s a fact like, do you not know?

I know that. You release your campaign statements every month. You have to, you’re required by law to do it. And you do, you have been, we can easily see that you’re running out of money. We also know that your former campaign manager, Brad Parscale is under investigation for stealing up to 40 million from you and spending 170 million of your campaign money at his own companies. So that’s 210 million right there. Not to mention the fact that you have now had to pull ads from Wisconsin, Minnesota, Ohio, Iowa, Arizona. You don’t do that with a couple of weeks to go before the election where Joe Biden’s beating you in every one of those States. If you have tons of money, you can make all the claims you want about having so much money. The facts that are readily available to every single person in this country tell us a different story.

And the saddest part is his little Magna followers are going to believe his tweets. They’re going to say, well, no, obviously he’s got tons of money. He said he has tons of money. All the fake news says he has no money. Now it’s not just the fake news saying he has no money. It’s his own campaign. Financial statements saying that he’s getting his ass kicked in the money race. It’s the fact that we can verify he has pulled ads out of swing States where he is already losing. It’s not like he has a 30 point advantage in the swing state. And he says, you know what? Let’s go spend money where it’s needed. He’s losing.

He’s still pulling his money because he has to focus that money somewhere else. So where’s the money going his side from maybe Brad Parscale’s personal bank account. And we’ll find out when that investigation is over, the money is going to Texas. That’s where the lion’s share of this campaign. Money. That’s disappearing from swing States. It’s going to Texas. And a lot of the RNC money is going to Texas because they’re terrified. The Texas is about to flip blue. Now I don’t think it’s going to happen this cycle, but I think every presidential election after this one, Texas is going to be in play. It’s a little bit in play right now. I’m not too optimistic about it. I’d love to be, but I’m not. So they’re trying to keep it blue one last time. Trump’s trying to keep it blue one last time. Cause if he loses Texas, it’s all over for him.

He’s not going to pick up enough other swing States in this country to make up from losing Texas. So he asked to at least make sure he gets that otherwise. He said, we’ll see on November 3rd. And yeah, if you lose Texas, November 3rd would be quite embarrassing for you and tweets like this would absolutely come back to haunt you and be used by people to, uh, mock you relentlessly. But the facts remain. Donald Trump’s campaign is running out of money and he’s not putting his own money in because why would you, when you look at the polls and you see that you’re losing by 14 points here at 20 points here, you know, one point here, it doesn’t matter what it is, your, the loser at that point. And you’re not going to waste your own money to prop yourself up. When you know that that is a bad investment, you lose money on that. You’re not getting it back and Trump hates losing money. And so he’s not even willing to bet on himself at this point, that should tell you everything you need to know about where this campaign really stands.