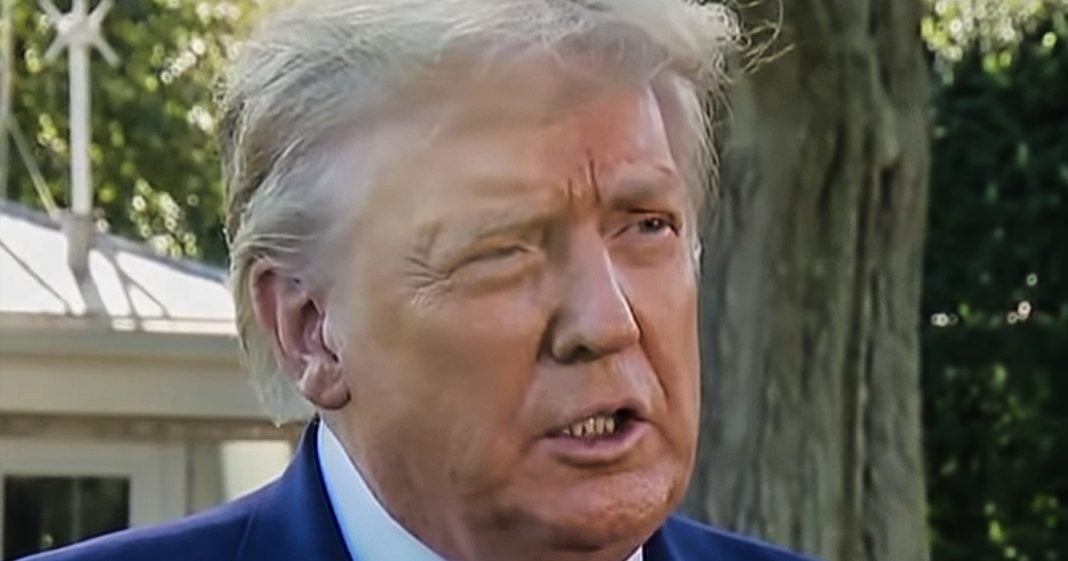 A shocking new report from The New York Times has revealed that roughly 200 organizations, lobbyists, and even foreign governments have spent MILLIONS of dollars at Trump’s properties, while at the same time benefiting from the policies of his administration. These groups know how to manipulate the president, and these expenses amount to backdoor bribery as they continue to influence the decisions of this administration. Ring of Fire’s Farron Cousins explains what’s happening.

One of the reasons that Donald Trump is a massive national security risk is because everybody has his number. I don’t mean phone number. I mean, everybody knows exactly what to do to get exactly what you want from this man. And according to a recent bombshell, New York times report everybody from foreign governments to even clean energy advocates are using this very well known method to exploit Donald Trump and to get what they want out of it. And here it is, and this is something we have been talking about since day one of this administration. All you have to do, if you want to get something out of this, president is give him money. Now, bribery is illegal, right? You can’t just walk up to the president, put a wad of fifties in his hand and say, Hey, I’d really like it. If you did this, no, no, you gotta be more subtle about it.

Although it doesn’t have to be too subtle. All you have to do is go spend some time at one of his resorts, you know, spend a lot of money at Mar-a-Lago or Bedminster. And if you do that, according to this report, you’re absolutely going to increase her chances of getting everything that you want from this president. According to the report, uh, no fewer than 200 different entities ranging from lobbyists, uh, corporations, foreign government leaders, and other advocates out there have spent millions of dollars in the last four years at Trump’s properties, just to be able to get his ear. And as the New York times reports, most of these groups end up getting exactly what they want from the president. But even if they don’t, the president still gets their money. So why is this important? Well, it’s important because it shows just how easily corruptible this man is because he didn’t divest from his companies.

He may not have full access to his fortune at the moment. All he has to do though. Cause he made Don jr. The executor of it. So all he has to do is get Don Jr’s permission. Then he does have full access to it, but he still gets all the profits from it, which is why he should have been forced to divest, you know, get rid of it a hundred percent to where you do not get any of the money. You get none of the profits. Essentially you have to forfeit your business. If you want to be the president of the United States. And if you think that’s out of the realm of possibility, let me remind you of the thing I always remind you about, which is the fact that they made Jimmy Carter sell his peanut farm because they didn’t want him pulling in that sweet, sweet peanut money while being president of the United States.

Maybe it would make people a little more apt to go buy Carter’s nuts. But today, when we know for a fact, because this is not the first report telling us this, we have seen reports of Saudi Arabia and officials buying lots of rooms like blocks of rooms at Trump’s DC hotel and never checking and paying for them, but not actually using them because they don’t want to stay there. They just want the influence of being like, Hey, we’ve dropped a couple million at your hotels, bud. Yeah, come on. You give us something here. Maybe, maybe sell us another hundred million dollars worth of weapons that we’re just going to turn around and sell to the bad guys over here. Those are things that happen. By the way.

Everybody knows how to get to this guy. Everybody knows how to manipulate this guy. And he’s more than happy to go along with it. Good. He doesn’t care. He doesn’t care about selling out the United States. He doesn’t care about selling out the office of the presidency. All this man cares about is how much money he can put in his pockets. Legal, illegal doesn’t matter. He wants it all. And he is using his position as president to make himself richer. And that is the only reason he wanted this job. The title is nice, right? The power is nice, but at the end of the day with Trump, it always comes back to money.